Editor’s note: This story was originally published by Sentinel Colorado and was shared via AP StoryShare. It was written by Kara Mason, a Sentinel Staff Writer.

Aimée Stahel climbed more than a dozen 14,000-feet peaks last summer, just months before she was diagnosed with one of the most aggressive forms of breast cancer that, if detected even just six more months later, could have been a death sentence.

She didn’t feel any lumps in her chest. In fact, she said she felt great. It was her dedication to her annual mammogram that likely saved 49-year-old Stahel’s life. Doctors fear, however, that others who don’t take cancer screenings and routine medical exams as seriously as Stahel did could be rolling the dice on their lives.

Cancer screenings are down 8% year over year at the Medical Center of Aurora, according to hospital statistics. Health officials say the pandemic is still playing a part in patients putting off routine health care.

Last summer, the Center for Disease Control and Prevention reported that its National Breast and Cervical Cancer Early Detection Program declined by 87% for breast cancer and 84% for cervical cancer during April 2020 as compared with the previous 5-year averages for that month. By June 2020, screening numbers in the program started to rebound, but nationwide, they’re not where they were before COVID-19 shuttered non-emergency health clinics for weeks at the onset of the pandemic. 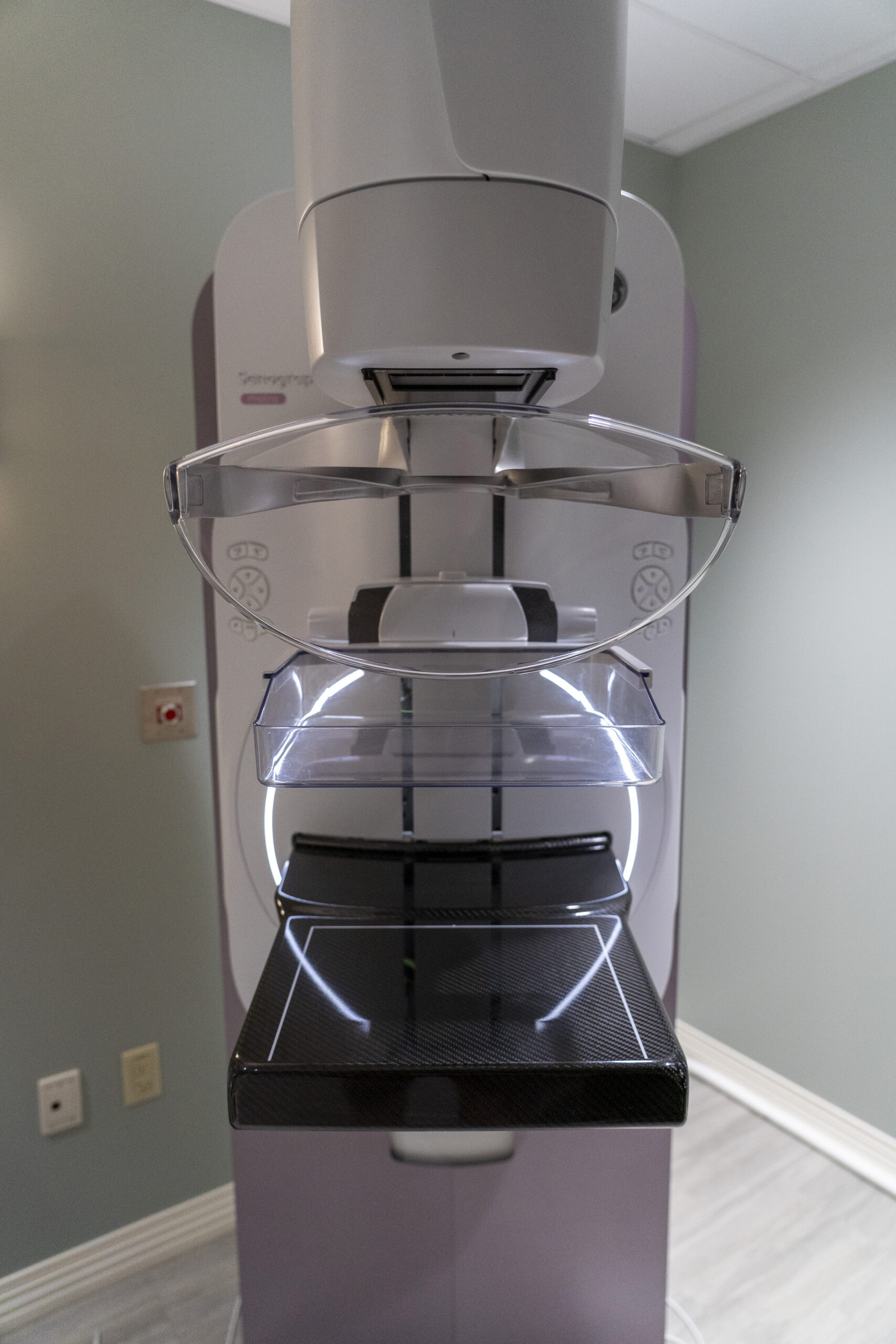 A mammography machine at The Medical Center of Aurora. A sharp decline has been seen in routine health check-ups since the beginning of the COVID-19 pandemic.
Photo by PHILIP B. POSTON/Sentinel Colorado

Overall, researchers from the American Cancer Society estimate that millions of Americans have missed cancer screenings and other preventive care because of pandemic disruptions.

“Many people caught up on screenings later in 2020, but overall, the COVID-19 pandemic kept screenings down over the course of the entire year,” said ACS researcher Ahmedin Jeman in a statement earlier this month. “As we move forward, it’s crucial to get people back into their doctor’s offices to get screened.”

Low-income women and women of color saw some of the sharpest declines in routine breast and cervical cancer screenings. The Colorado Department of Public Health and Environment helped nearly 12,000 uninsured or under-insured women across the state access cancer screenings from July 2018 to June 2019, said Emily Kinsella, who manages the Women’s Wellness Connection.

“Things were actually going pretty well in 2020 until the pandemic,” she said. From March 2020 on, the program, which works with health clinics across Colorado to help connect women without insurance to free confidential breast and cervical cancer screenings, saw a few thousand fewer women.

When the fiscal year ends on June 30, it’s not likely Kinsella’s program will have reached as many women as it did in 2019. As of mid-May, the program was at 9,936 cancer screenings.

“We are focusing on the populations that don’t have access to screenings. So they’re uninsured, they don’t have Medicaid, they don’t have insurance, they’re in that gap. We’re also focusing on those populations that are less likely to be screened, or more likely to have poor outcomes. So they have lower screening rates, or maybe they have higher late stage diagnosis (rate), higher mortality rates, things like that,” she said.

“We’re focusing on that group to try to reduce the inequities in outcomes for breast and cervical cancer, as well as reduce the cost…When it’s cheaper, it’s easier.”

Most of that outreach effort to get those Coloradans screened for cancer happens in-person, so community health navigators had to get creative about connecting with people over the last few years. They handed out flyers during vaccination clinics and used yard signs to try and nudge people to seek out screenings.

Those navigators, however, are in short supply, said Colorado Cancer Coalition Executive Director Christi Cahill. Because they’re not reimbursable expenses in the industry, they’re often not a priority, though they play a vital role in connecting people, especially those in need, to care that can become more costly down the line.

The message is clear: don’t wait

Skipping a yearly mammogram or other cancer screenings off even just a few months could have serious consequences, doctors warn. Stahel was diagnosed with invasive ductal carcinoma in January.

In March, she opted for a double mastectomy and reconstruction surgery at the Medical Center of Aurora, saving her from more than a year’s worth of chemotherapy treatments. It’s unlikely that would have been the case had she put off her screening.

“Talk about cancer not discriminating,” Stahel said from her Denver home earlier this month, a day before she planned to move to North Carolina with her husband, who received a job promotion the same week as her diagnosis. “It doesn’t matter how healthy you are, how active you are. You have no choice. So you fight it and you get support, and you find the best team that’s the right fit for you. And you move forward fast.”

Nine weeks after surgery, Stahel was running a half-marathon with her husband.

“I decided this wasn’t going to dominate my life,” she said.

Stahel had no family history of breast cancer. She didn’t even know anybody who had it until she got the call about her diagnosis in January. “I thought they had the wrong patient at first,” she said.

But breast cancer can happen quickly.

“I don’t think people quite understand that breast cancer can easily arise within a year. So it’s really important to not take any time off,” said Dr. Kimberly Wright, a breast radiologist with HealthONE Breast Care at The Medical Center of Aurora. “They should be coming every single year. The risk of missing an early stage cancer can have really detrimental effects and can significantly affect their prognosis.”

Dr. Ned Sharpless, director of the U.S. National Cancer Institute, estimates there could be nearly 10,000 excess deaths over the next decade because of delayed detection and treatment of breast and colon cancers. Postponing care “was prudent at one time” because of the risks of COVID-19 exposure, but deferring for too long “may turn one public health crisis into many others,” he wrote in the journal Science.

Wright and others say health care clinics are a relatively safe environment now. Providers wear masks and have taken other measures to prevent the spread of the coronavirus.

Based on what’s known about breast cancer deaths from past years in the United States, about 10% “could have been prevented if women were getting routine screening,” but 20% to 25% could have been prevented with appropriate treatment, said Dr. Otis Brawley, a Johns Hopkins University professor and former chief medical officer of the American Cancer Society.

“That’s not to say screening is not important, but many people think that cancer screening saves more lives than it actually does,” Brawley said.

A short-term delay may not hurt mortality much if screening resumes quickly, as it needs to do, he said.

Kinsella, with the state health department, said she expects to see a difference in more severe cancer diagnoses throughout the state because of delayed screenings, though she and other health care experts aren’t positive when data will start to show that.

A short-term delay may not hurt mortality much if screening resumes quickly, as it needs to do, he said.

Typically, Wright sees more patients in the fall, when Breast Cancer Awareness Month in October pushes more people in to get mammograms, but she said she wishes there were more reminders all year long.

“It definitely should not be limited to once a year, I mean, quarterly if at a minimum, I would think,” she said. “We do see a significant rise in the number of women coming into their mammograms in October, so obviously the awareness month works. It gets the message out and gets women coming in. I just wish it wasn’t so infrequent.”

After Stahel’s diagnosis, a flood of her friends sought out cancer screenings. Some who had skipped multiple years of mammograms were suddenly making appointments.

“We really can catch it early, if we can do our due diligence,” Stahel said. “Just sacrifice 10 minutes. I know it’s annoying. We all hate that machine. But after 10 minutes, it could literally save your life.”

— THE ASSOCIATED PRESS contributed to this report