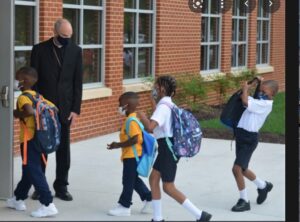 This week the Supreme Court issued its opinion in Carson v. Makin, a case dealing with a Maine statute that prohibited public funding of religious schools.   The majority opinion, written by Chief Justice John Roberts, struck down the Maine law, declaring that it improperly discriminated against religion.

This ruling is an abomination, although entirely predictable given the conservative majority and the steady erosion of the separation between church snd state.  We are drifting steadily toward the very kind of state-supported religion that the United States was formed to avoid.

Previous Supreme Court cases, notably Trinity Lutheran and Espinoza, permitted public funds to flow to religious schools based on the non-religious use of the money; for example playground resurfacing in the Trinity Lutheran case. But this has no such limitation.

Roberts astonishingly argued that there is no real distinction between a school’s religious status and its use of funds for religious purposes.  The fact that the Chief Justice could see no such distinction is evidence of how far we’ve drifted.  I suppose he and his conservative colleagues would be fine with government grants to support Communion and Baptism too.

The worst ramification of this ruling will be taxpayer funds going to institutions that teach Creationism, that homosexuality is abnormal, that sex outside heterosexual marriage is a mortal sin, and other such primitive and harmful bigotry.  Many religious schools, including in the Maine case, also discriminate against LGBTQ+ folks in both enrollment and hiring.  Would the court so readily endorse a scheme where public funds supported private schools that refused enrollment or employment to Black people?  I suspect not, at least for now, but I ask you to consider whether that is really any different.

Although on a small scale – for now – it is hard to see this as anything other than government endorsement of religion and discrimination.

It has been a long time coming.  Cases just waiting for this court majority have been lining up at the door like techies outside an Apple Store salivating over the newest release.

For several decades a significant motivation of charter school and voucher program architects was to do an end-around secular public education and create a patchwork of religious schools supported by tax dollars.  To this end, “foundations” have been formed to provide “scholarships” rather than directly supporting the religious schools.  “We’re just providing tuition support for students,” they claim. “The families choose the school – not us.”  These scams won’t even be necessary after this ruling.

Don’t be deceived.  This is part of a culture war, not an esoteric legal decision.  Millions of Americans despise “government schools” that are, in their addled view, teaching socialism, atheism and other radical leftist ideology.  That this is not true matters not at all.

These folks want Christian prayer in all schools; they want kids to learn American Exceptionalism, not the truth; they want to push back against diversity and equity; they want to teach creationism and intelligent design alongside or instead of evolution; they despise the notion of a hetero-non-binary approach to gender and sexuality.   And they want you and I to pay for it.

Even actual public schools are at risk.  All of the “Parents’ Rights” nonsense is being pressed by those who want the kind of schools I described above.  All over the country, school boards are being taken over by far right activists who want their public schools to stop teaching the truth and start teaching the educational equivalent of Fox News.

We are understandably distracted by insurrection, pandemic, inflation and mass murder.  But the long game is being played in education.  If we lose the secular, democratizing and civilizing institution of public education, we will never get it back.  It has been a distinctive feature of our republic and has enabled the amalgamation of remarkable diversity into one imperfectly beautiful nation.

This decision, I’m afraid, will accelerate the bitter divisions that may be our downfall.