Meeting Live Animals: Colorado is a freeform zoo waiting to be explored

Nothing will get your heart racing like rounding a hiking trail and spotting a pair of antlers or a scaly tail disappearing into the bushes. Humans may have taken over the world, but we are not alone living in it. Colorado is home to so, so many mammals, reptiles, birds, and insects that are fascinating to stumble across during your adventures this summer, if you know where to look. 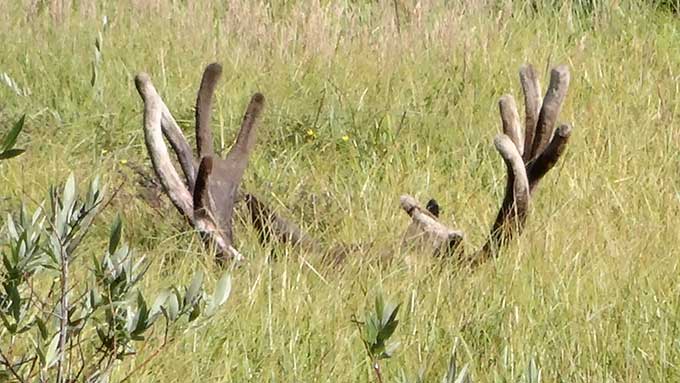 Rocky Mountain National Park is probably the most obvious place to go looking for wildlife in Colorado by stepping into the wilderness of the mountains — home of bears, mountain lions, moose, elk, deer, and more. Your odds of finding an elusive cougar might be low, but elk and deer are plenty likely. 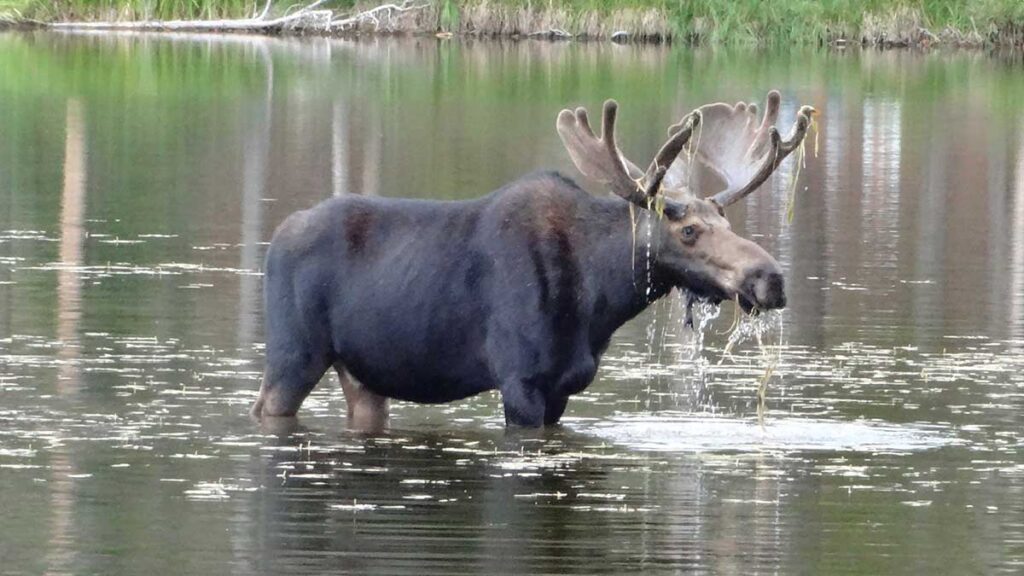 Currently, timed passes are required to enter the park, but once you’re in, there are 335 miles of hiking trails waiting to be explored. You might even spot a creature from your car window.

Not all hikes in the mountains are in the park, so if you can’t get a day pass, or if you just want to explore somewhere different, give AllTrails a try. AllTrails is an online resource or app where you could search for a trail of your preferred length, difficulty, location, etc. Users leave comments, so in addition to finding the perfect trail to explore, so you might hear about the animals other hikers saw there. 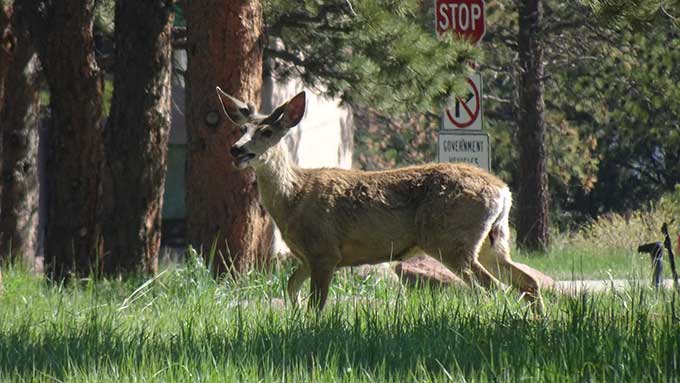 If you choose to climb a 14er this summer, you’ll go above tree line, and different animals thrive there under harsh conditions, like mountain goats. While you won’t be treated to a mountain goat sighting every time you hike a 14er, you can probably count on spotting at least one four-legged mammal — a dog. Many hikers bring their dogs along, and you could too, provided you know they can handle the exertion. Some dog-friendly 14ers are Grays, Torreys, and Quandary Peaks among others. 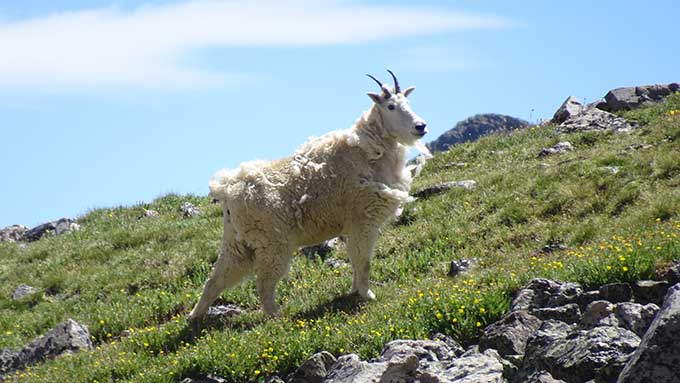 Animals are not exclusive to hiking trails, and if you’re in the right place at the right time, then you might run into elk while walking in downtown Estes Park. Even though they came into town and know how to use the sidewalk, they are still wild animals and should be treated with respect and caution. 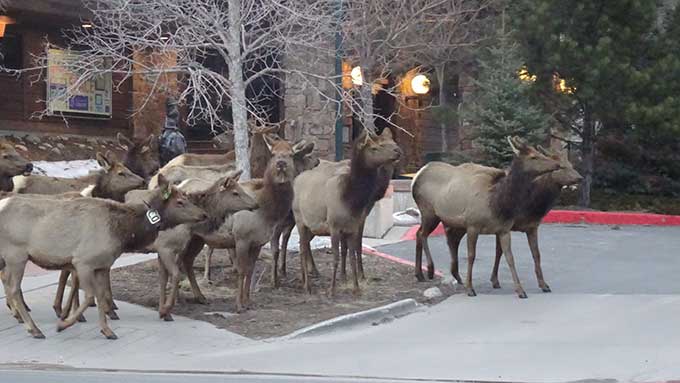 Historically, most settlements, cities, and towns were established near rivers, lakes, or coastlines because water is a vital part of survival. This applies to animals as well. Pull up Google maps and take note of large blue areas, indicating bodies of water, and see if you can (reasonably and safely) get to them. Most ponds, lakes, and reservoirs in Colorado have hiking paths around them for public use. Just be careful not to venture onto private property. 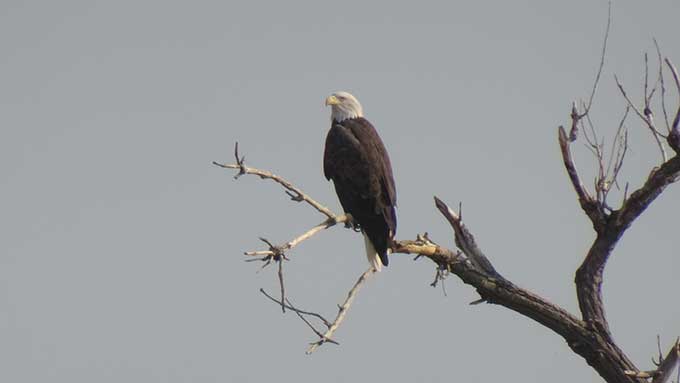 Walden Ponds and Sawhill Ponds are right next to each other and boast a total of eight ponds, plus more in the area that aren’t technically part of these groupings. Without a map it would be impossible to tell where one section begins and the other ends. These ponds are in Boulder, west of N. 75th St. and north of Valmont Road. Fishing is allowed with a permit, and while casting, other fishers of sorts might be spotted, such as birds of prey. 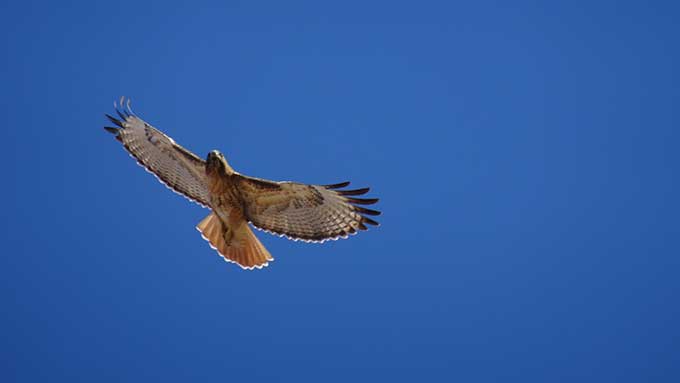 McKay Lake is just north of the King Soopers on W. 136 Ave. in Broomfield, so you could potentially fit in a walk on your way to the grocery store. Since it is in the middle of civilization, you’re probably not likely to run into a moose here, but birds tend to migrate through all of the lakes in Colorado. Even the little pond by the Broomfield Library sees unique birds stop by. If you have young children, Canadian geese are almost guaranteed, and maybe you could get the kiddos to check out a book on bird identification beforehand or afterward. 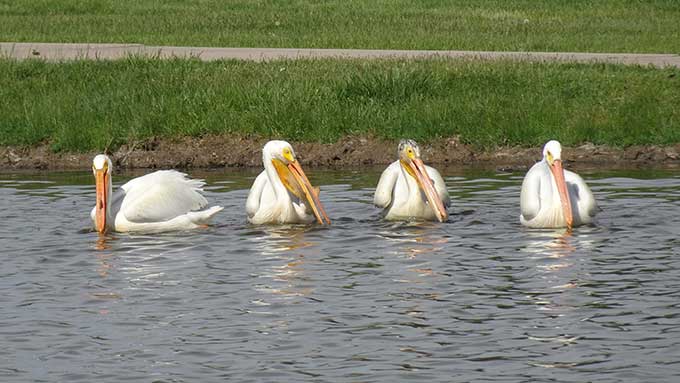 Anthem Lake in Anthem Community Park is in northern Broomfield. Year round, the lake is teaming with wildlife, if you take the time to notice. Depending on the time of year, you’ll see pelicans or ducks on the water. If you squint at the water to see below its surface, you might notice a crawdad or fish. 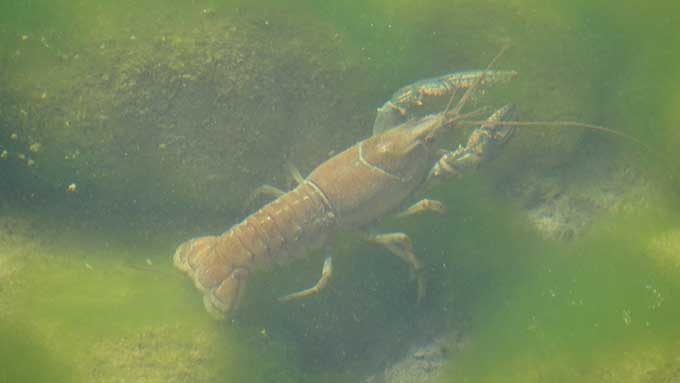 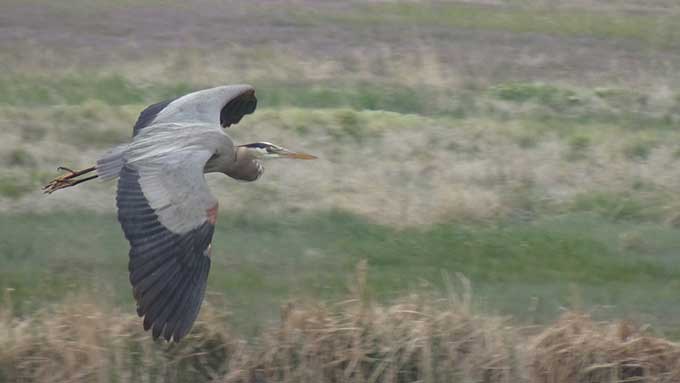 Tom Frost Reservoir is south of the Paul Derda Recreation Center and east of the Broomfield Commons Open Space. There is a trail around the water and multiple trails throughout. This open space, like all the open spaces in Boulder County, is home to coyotes, so keep your dogs on leashes, your head up, and your camera ready. 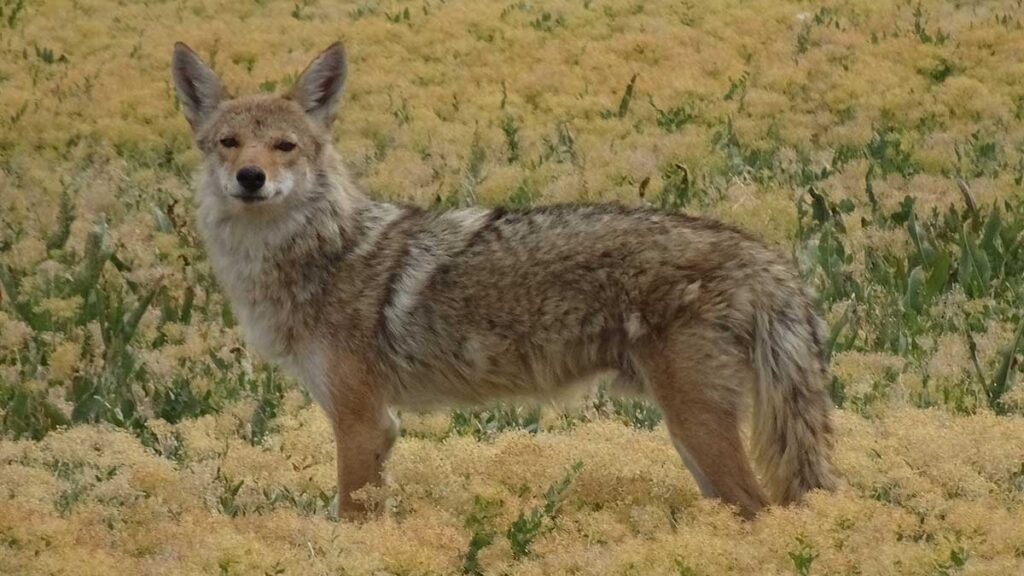 Even if you don’t actually see a critter, you can find evidence that they have been around. Hoof or paw prints are obvious indicators or scat —animal poop. A little more subtle are bug prints. Some leave “footprints,” and others leave lines marking where they have been. 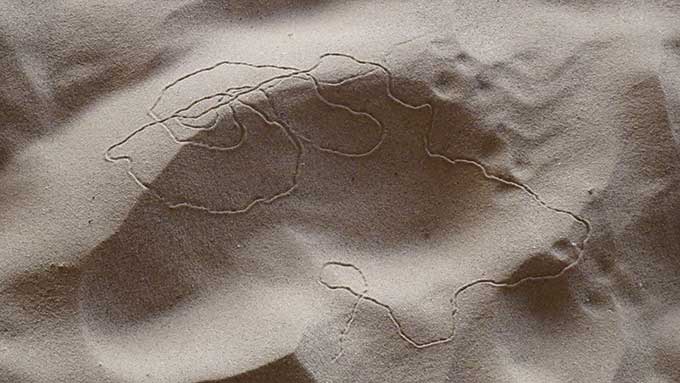 Sometimes, marks in the ground can tell a story. Dr. Betty Dorr is a professor at Fort Lewis College, and one of her areas of academic expertise is animal behavior. She identified these markings as the site of a probable capture of a mouse by an owl. The mouse tracks lead to the scuffle and not away, and there are brushes in the sand that were likely created by wings. 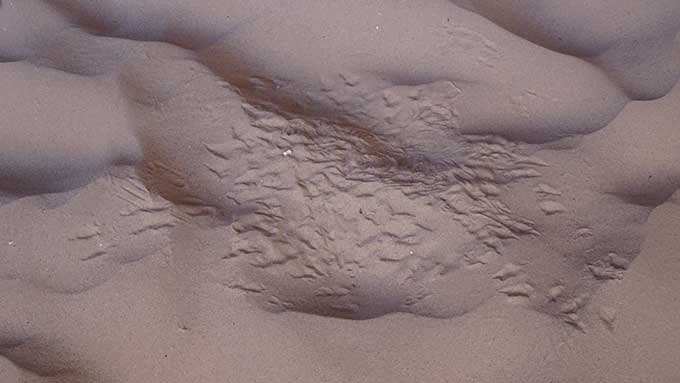 First thing in the morning can be a great time to look for prints as many animals are active at night, and fewer humans will have trekked over them already.

If you see movement out of the corner of your eye, this is a great indicator that something living is there or that it’s a windy day and inanimate objects are moving around just to get you excited. Many animals employ camouflage to keep themselves hidden and safe, so you could look directly at them and never know —kind of like how this toad blends into the rocks it is sitting on. 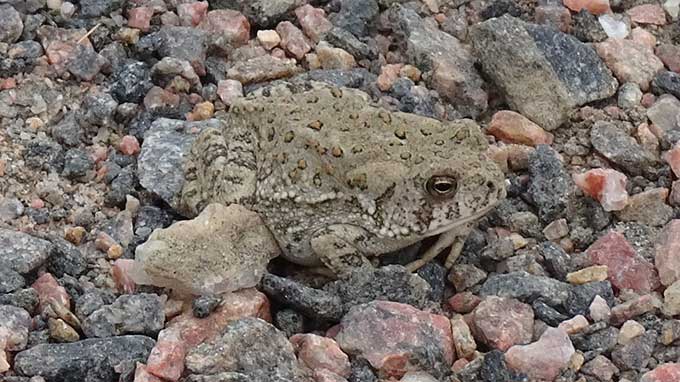 Nocturnal animals only come out at night, but even animals that aren’t nocturnal can be active after dark. Since humans do not have night vision or echolocation to help us navigate, finding these critters can be a challenge.

If you have a black light handy, you might find bark scorpions in southeastern Colorado, which glow brightly under a black light. Observe them carefully, and then sleep soundly. They won’t typically bother anyone if they are left alone. In fact, they were there all the other nights before you knew about them, and they never hurt you. 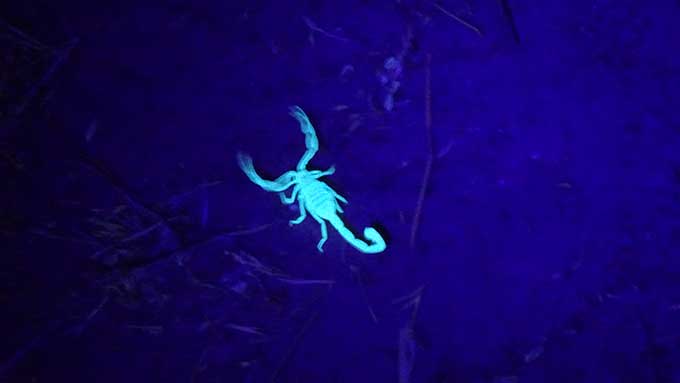 Bats are another night creature that you can probably spot. A trick is to look up as the natural light dims, and you’ll be able to see their dark bodies against the remaining light in the sky. There are no vampire bats in North America, so you don’t need to fear these little guys either. Even if you don’t see them, listen for their clicks as they echolocate to find dinner.

As majestic and exciting as wild animals are, they are still wild, and they aren’t going to be excited to see you nor will they want to lick your face to show their love like your dog when you get home. The National Park Service published some tips on Instagram for being safe around animals: 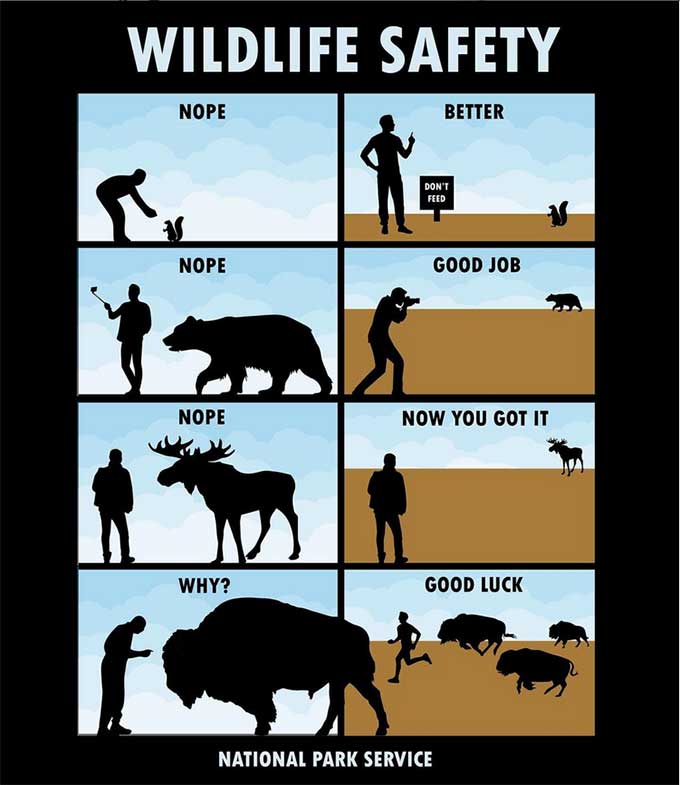 Basically, use common sense. Be aware of your surroundings so nothing sneaks up on you.  Maintain distance between you and all creatures regardless of how “harmless” they may seem. Binoculars and cameras with strong zooms are fantastic ways to “get close” to an animal without getting too close.