Latino voters could be decisive in Colorado’s biggest races, and the campaigns know it 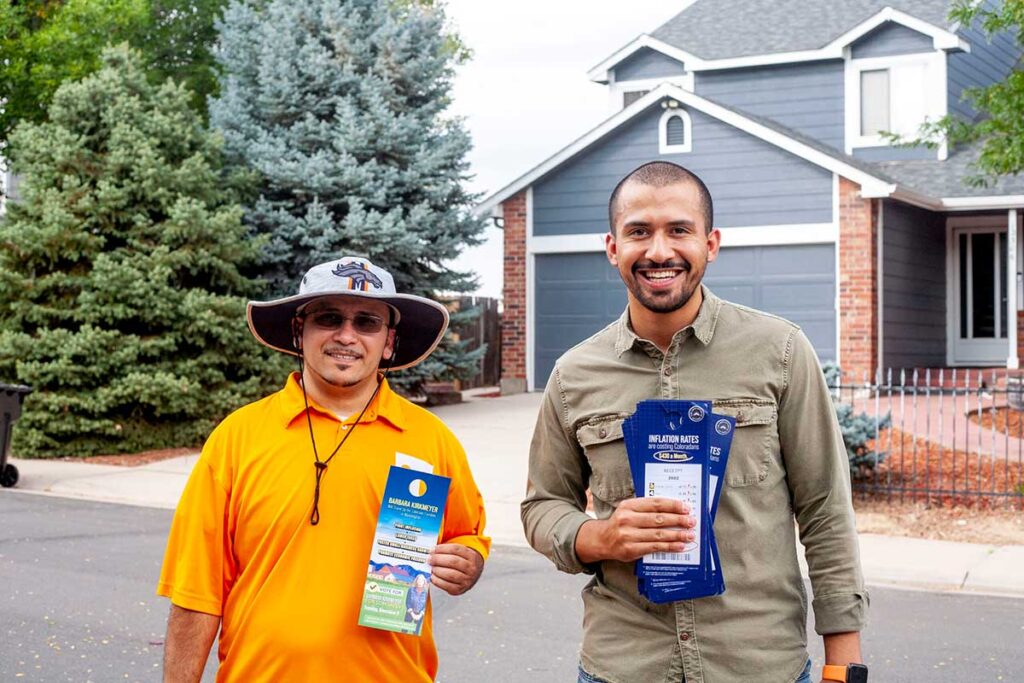 Gerard Torrez (L) and Angel Merlos with the Libre Initiative Action was out knocking on doors and leaving literature for Republicans in Thornton, part of the state’s new 8th congressional district and which has the largest Hispanic population. Photo courtesy of Colorado Public Radio

Latino voters are a powerful force in Colorado, especially in tight races. That’s why Gerard Torrez was knocking on doors in Thorton late on a hot weekday afternoon.

Torrez’s goal was to convince people in this Latino neighborhood to support Republican candidate Barbara Kirkmeyer in the race for Colorado’s new 8th congressional district.

Door after door, he’d introduce himself, mention he was part of the group Libre Initiative Action and start talking about why he supports Kirkmeyer, noting “she’s advocated for less inflation.”

At one house, a petite brunette with tattoos who answered the door cut off his spiel with a question: “What party is she in?” “She is a Republican,” Torrez answered.

“She will have my vote and you probably don’t need to say anything else,” the woman said. “I’m not a fan of the Democrat party right now.”

It’s not always this easy. Most people were polite, but non-committal. Election day is still two months away and most of the voters who answered their doors aren’t paying too much attention yet.

But that’s not stopping the parties and different groups from trying to sway this pivotal voting bloc.

Torrez is with Libre Initiative Action, a Hispanic outreach group backed by the conservative Koch brothers-funded Americans for Prosperity. The group estimates it’s knocked on around 4,000 doors in the eighth district since August.

Latinos make up 22.3 percent of Colorado’s population, and voters in that group are far from a monolith. But while Colorado Latinos have strongly supported Democratic candidates in the past, Libre’s strategic director, Angel Merlos, believes concerns about inflation and cost of living give Republicans an opportunity to make inroads this year.

“They believe that if they vote Democrat they think they’re going to get the same results. So we’re seeing, ‘You know what, I’m going to give the conservative vote a chance,’” he said.

Merlos said he does wish Republicans on the extreme right of the party would tone down their rhetoric on immigration.

The new 8th District, which has a large Latino population is at the center of a toss-up congressional race

Libre is focused on Thorton because it’s in CO-8, the state’s newest congressional district which is considered a toss-up race. It’s also the district with the most Latinos, at almost 40 percent of the population. The Republican National Committee recently opened a Hispanic Community Center here, part of a national outreach effort to nonwhite communities.

At the center’s opening, Colorado RNC National Committeewoman Vera Ortegon told the crowd that when it comes to issues like securing the border, crime and the economy, the GOP and Hispanic population are on the same page.

Democrats have also been very active in making their case to the voters of CO-8. The Colorado Democratic Party has opened two field offices in the district and has also had volunteers door knocking and working the phones, reportedly making an average of 10,000 calls in Adams county and across the state a week.

“Latinos will see right through the GOP’s half-hearted effort,” said Nico Delgado, a spokesperson for the Colorado Democrats. “We will make sure voters know their far-right record of trying to ban abortion, siding with wealthy corporations, and opposing a pathway to citizenship which hurts all Coloradans.”

There are also nonpartisan efforts underway just to encourage more residents of the district to vote, regardless of who for. The eighth district currently has fewer registered active voters than any other district in Colorado.

Sonny Subia, executive director of the League of United Latin American Citizens in Colorado, is part of that push. He has also been out knocking on doors, registering Latinos to vote. He said all the attention on voters here shows just how important Latinos will be this fall. “Now they’re in play. Their vote really matters.”

The race is between Kirkmeyer, a state senator, and Democratic state Rep. Yadira Caraveo, with many analysts giving Kirkmeyer the edge, as history and the political climate favor Republicans.

But if Caraveo wins, she would be the first Colorado Latina to go to Congress. And that possibility excites Thornton Democrat Shantell Hernandez, who moved to the area to be around other Latinos.

Congressional district eight isn’t the only big race where Latino voters could be pivotal. In a close U.S. Senate race, they could also be key to victory, something it’s clear both campaigns are very aware of.

“We are gonna have a vigorous program for TV, for radio, for digital,” Democratic Sen. Michael Bennet explained at an event in August with the group Voces Unidas Action in Glenwood Springs. “We’re not just starting now. We’ve had a Latino steering committee for a long time. That’s helped give us advice about what we should be focusing on in the campaign.”

His Republican challenger Joe O’Dea is also reaching out through Spanish ads and social media.

“Joe’s working class story connects with working Americans, Hispanics and Latinos especially,”’ Kyle Kohli, O’Dea’s communications director, said in a statement. “Everyone cares what the grocery bill is and if their community is safe. [President Joe] Biden’s policies and Bennet’s rubber stamp have crushed working people.”

O’Dea has said he hopes to get 60 percent of the Latino vote in the race. That would represent a huge swing in the vote; some reports and exit polls from two years ago showed 70 percent of Latinos supported Colorado’s Democratic Senate candidate John Hickenlooper.

When it comes to values, Democrats like former state Rep. Bri Buentello argue their party has a strong case to make.

“I’m not going to sit here and pretend to speak for all Colorado Latinos,” she said at a coffee shop in Pueblo. “But I know that my grandparents came to this country because they believed in the American Dream, public education, [the idea that] if you work hard, you’re gonna get ahead, a fair day’s wage for fair day’s work. These are issues that Democrats to this day champion.”

Still, many Latino Democrats say the party has been taking support from the community for granted. Pueblo community activist Theresa Trujillo notes she hasn’t seen many people of color running or even encouraged to run for statewide office. All six of the Democrats running statewide this year are white.

But Sol Sandovol, who ran unsuccessfully for the Democratic nomination for Congress in the 3rd district, said she doesn’t think the answer is for Latinos to turn away from the Democratic Party.

Cost of living and high gas prices are the top concerns for Latinos, according to polls

Recent polling of Latino voters by UnidosUS and Mi Familia Vota indicates that when it comes to the issues, there is an opportunity for both parties to make gains.

The cost of living and high gas prices came out as the top concern for Latinos in Colorado, with jobs and the economy coming in third. In between those was crime, mainly driven by the concern that guns are too easy to access and that elected officials need to do more to end school shootings. And abortion also made the list for the first time, with 74 percent of Latino voters saying it should remain legal, whatever their own personal beliefs on the issue.

While Republicans have made Democratic handling of the economy a major campaign issue, support for stronger gun controls and access to abortion could send these voters toward Democrats.

Regardless of the outcomes this fall, Beatriz Soto, a Democrat from Glenwood Springs who lost a bid for local office in 2020, is glad to see the parties showing up for Latinos.

“Both the Democrats and the Republicans are really noticing the power in that voting bloc,” she said. “At the end of the day, I think if either parties are doing their job, it just helps our democracy. And I think Latinos will make both parties better at the end of the day.”

The ultimate test however will be what happens after Election Day, and whether the parties continue their outreach or if they once again fade away until the run-up to the next election.

CPR’s Bente Birkeland, Will Cornelius and Stephanie Rivera contributed reporting to this story.