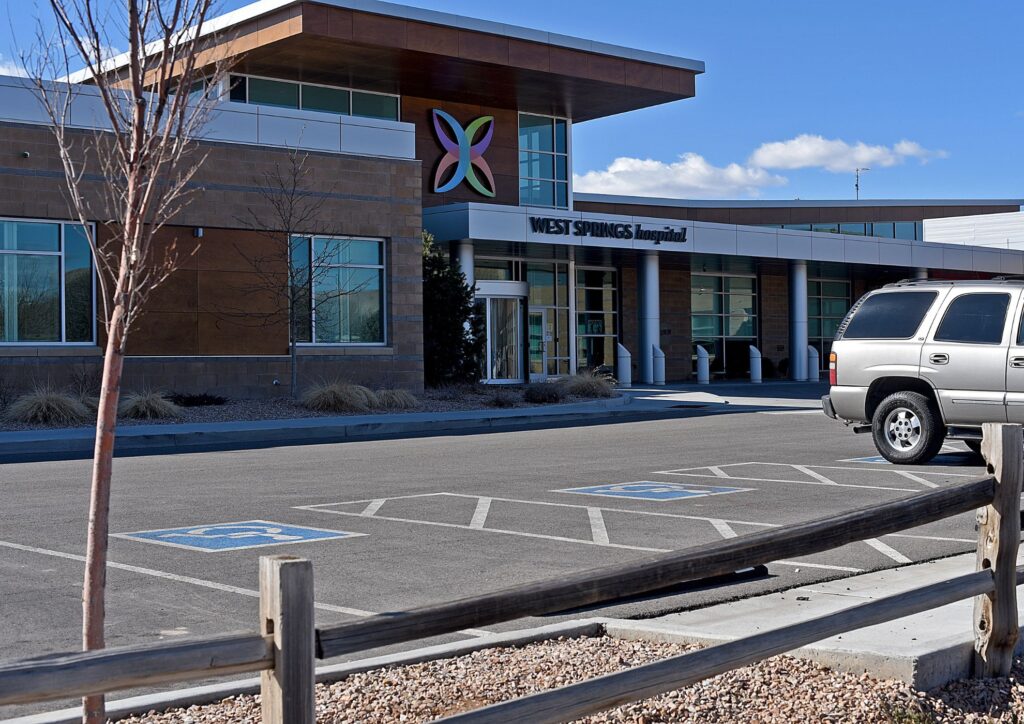 Complaints about safety and quality of care in West Springs Hospital’s adolescent unit have prompted state regulators to shut part of the facility and withhold authorization for Medicaid patients until concerns are investigated. (Photo by Dean Humphrey, COLab)

Colorado’s new Behavioral Health Administration shut down part of the Western Slope’s only psychiatric hospital on Wednesday in response to complaints about the quality and safety of the care it gives teenagers and kids as young as seven.

Also Wednesday, the Department of Health Care Policy and Financing said it will withhold payment for any new Medicaid inpatients until investigators complete a review of safety concerns at West Springs Hospital in Grand Junction. That means Medicaid recipients on the Western Slope in need of psychiatric hospitalization will, at least for a few months, have to seek it in Denver, Salt Lake City or even farther.

West Springs is an arm of Mind Springs Health, the long-troubled mental health safety-net provider contracted with the state to serve residents of 10 Western Slope counties.

The Behavioral Health Administration’s cease and desist letter, served late Wednesday morning, ordered West Springs to stop using an old building north of and across a short walkway from its new hospital to house and treat inpatients. The order says two young patients escaped from Building D in early September – but fails to note they returned voluntarily within an hour. State investigators found patients still housed there as of Friday. The order also says the building contained unsecured cords and sharp plastic objects patients could use to harm themselves or others. Whether any patients did so is unclear as of this writing.

Mind Springs’ spokeswoman, Stephanie Keister, declined to answer questions about the order Wednesday. Her bosses had said Tuesday evening that about eight of the estimated 30 and 40 psychiatric patients hospitalized at West Springs were children and teens.

Wednesday’s cease and desist order comes 12 days after Mind Springs fired Dr. Frank James, a psychiatrist who had been serving as its latest chief medical officer, for what its employment lawyer described as “rude, insolent, harassing and offensive behavior toward fellow employees.” Two days later, sources in state government say, James filed a complaint with the Colorado Department of Public Health and Environment alleging West Springs has been compromising the quality and safety of care for inpatients who are teenagers and children.

State officials will not make the complaint or at least one other they allude to public or release details about them until three separate agencies investigate the allegations. And James, for his part, has not responded to three requests for comment this week.

Chelsea Arata, who worked for about six years as a psychiatric nurse practitioner treating young inpatients at West Springs and young outpatients at Mind Springs, says James effectively put her in charge of West Springs’ adolescent unit earlier this month. She believes at least one of the complaints to the state echos concerns she recently raised in meetings and emails asking for clarity and support about issues such as:

Mind Springs fired Arata last Friday, she says in retaliation for the care quality and safety questions she was raising about young patients’ care. Her wife, nurse practitioner Raelynn Hilgenfeld, was escorted out of Mind Springs’ residential program earlier this year after blowing the whistle about potentially lethal prescription problems in its addiction program.

For his part, Mind Springs CEO John Sheehan said late Tuesday that West Springs is licensed to treat youth as young as age seven. He said he has never spoken with Arata and is not familiar with any concerns she raised about problems in the adolescent unit.

“I don’t believe there is any evidence that she was retaliated against in any way,” he added about her firing.

Rather, Sheehan said Arata “was terminated for directing a (nurse) on the unit to agitate a child so that child could be restrained and moved to another part of the unit” and then being “untruthful” about it. Mind Springs Chief Operating Officer Elizabeth Tice added that Arata failed to file “critical incident reports” about that teenager’s violent outbursts, as all Mind Springs employees have been instructed to do.

Arata countered there’s no evidence suggesting that such provocation actually happened and said administrators twisted the meaning of her comments about the patient and failed to give her and her colleagues clear, updated policies about how to handle violence by patients, including a 16-year-old recently punched in the face.

Since her firing on Friday, she said, “I have nightmares every night about my patients. I love these kids. I’ve been taking care of them for years. I don’t know what’s happening with them and I never will. I feel like a conspiracy theorist as I’m sitting here realizing …how they shape the narrative to justify firing me for” bringing problems to light.

Mind Springs Health is contracted with the state to serve people who are indigent, on Medicaid, or facing mental health or addiction crises in a 23,000-square mile area in Eagle, Garfield, Grand, Jackson, Mesa, Moffat, Pitkin, Rio Blanco, Routt, and Summit counties. It has 13 outpatient offices throughout the 10-county region in addition to West Springs hospital in Grand Junction.

The organization’s outpatient care has been the subject of numerous complaints from residents in those counties about everything from misdiagnoses, misprescribing, and having to wait as long as 11 months to see a psychiatrist. It also has been the subject of frustration among some county officials who haven’t been able to glean answers from Mind Springs or the state about why some services the organization has claimed to offer haven’t actually been available to the public.

Sheehan started running Mind Springs in August after his longtime predecessor, Sharon Raggio, resigned last winter following an investigation by the Colorado News Collaborative (COLab), a nonprofit involving more than 160 Colorado news outlets. That investigation exposed longstanding problems with Mind Springs: quality and safety of care, access to care, and lack of transparency in how it spends tens of millions of state and federal tax dollars. That news report was part of a broader investigation into flaws – some of them fatal – within Colorado’s statewide mental health safety net system and state regulators’ inaction about them.

COLab has since exposed allegations by several former Mind Springs employees that the organization had them falsify thousands of patient records in an effort to make its treatment programs seem more effective and secure funding from the state. Those fraud allegations are currently under investigation by Rocky Mountain Health Plans, which contracts with the state to administer Medicaid funding to Mind Springs, among other safety-net providers.

With its news partners at the Colorado Springs Gazette and Denver Gazette, COLab also exposed a pattern of “life-threatening prescription errors.” A review found that in a sampling of 58 outpatient clients who were prescribed high doses of the tranquilizer benzodiazepine between February 2020 and February 2021, there were concerns about the quality of care given to 52, and 28 (48%) received care so poor they faced “severe, life-threatening impact.” State officials kept those findings secret despite mounting public concerns about Mind Springs. Sheehan has said his organization has addressed the problem.

Responsibility to regulate Mind Springs and Colorado’s 17 other tax-funded community mental health centers is split between three state departments: the Department of Health Care Policy & Financing (HCPF), which doles out Medicaid funding, the Department of Public Health and Environment (CDPHE), which controls the centers’ licensing, and the Behavioral Health Administration (BHA), which launched in July as a cabinet-level agency that, generally speaking, has replaced the Office of Behavioral Health in contracting with and setting care standards for community mental health centers.

Dr. Morgan Medlock, an emergency psychiatrist and addiction medicine specialist who runs the BHA, has promised “vast reforms” to Colorado’s mental health safety-net system, including far greater transparency and accountability. Her agency touts Wednesday’s cease and desist as an example of its commitment to “lead boldly,” even though Mind Springs already had addressed safety problems earlier this month by moving the adolescent unit out of Building D.

Mind Springs CEO Sheehan has since his hiring two months ago acknowledged long standing problems at Mind Springs. He said late Tuesday the organization has, under his leadership, been “improving every day.”

This story is brought to you by COLab, the Colorado News Collaborative, a nonprofit coalition of more than 170 newsrooms across Colorado working together to better serve the public. Learn more at https://colabnews.co