The Other World Cup 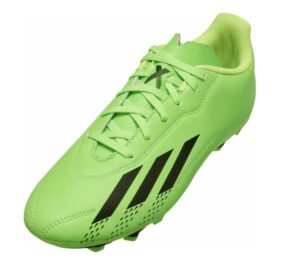 The FIFA World Cup (soccer) begins on November 20th. My wife and I attended a quite different match this week at the Boulder, CO JCC.

To protect privacy and to discourage paparazzi, I use no actual names.

Because of the threat of lightning, the session was moved into the gym.

Warmups began with dribbling exercises. WG did cartwheels across the gym floor. CD primarily supervised. CC looked at the ball with genuine curiosity but declined any contact. OB clomped across the gym floor in his green cleats, sounding much like a carriage horse in Central Park. MC dribbled skillfully in demonstration and attempted a few one touch shots with his feet at the basketball hoops. I was the only one who seemed to notice, but I was impressed.

I should interject that CS, at the previous practice, came up to my wife and me and declared confidently, something to the effect of, “I’m a pro. I get paid to do this.”

Next, small colored cones were placed in goal-width pairs and the athletes were to dribble between as many pairs as possible in 30 seconds. OB did 5 and reported 10. WG did 31 pairs and a dozen cartwheels. CD was enchanted with the cones and removed several from the field of play. WC reset the course and gave CD several of her own cones to play with on the sidelines, which didn’t interest her in the least. At this point, CD had acquired a staff ID on a lanyard, which hung from her neck to just below her ankles.

To properly visualize this activity I suggest imagining Grand Central Station at rush hour with every person changing direction every 3 or 4 seconds – while kicking a soccer ball.

The drill was repeated. OB did 10 and reported 15. WG did 31 and 2 dozen cartwheels. CC made fleeting contact and then went to sit and cough with grandfather – also masked. (CC might mean Covert Covid?) My wife then masked-up too, and I relocated to a safer seat. CD stood in the middle throughout the drill, casually kicking toward any ball that rolled by.

At the first water break, RV buzzed over to his bottle, which was near my feet. I should explain that RV was the second fastest kid, even though he is just 5 and all torso and feet – no apparent legs, thus like a Roomba remote vacuum. He sat to drink and stared at me as though he could read my mind – you probably know a kid like that. I squirmed and looked away. WG cartwheeled by, providing a welcome distraction.

After a few other drills, the squad suited-up for a scrimmage. The uniforms were those really ratty mesh singlets that you might remember from gym class, at least by smell. The athletes were divided into teams – red and blue. Watching them navigate the oversized singlets was quite amusing, as the head holes and arm holes were indistinguishable. CD was quite miffed when excluded from a dress-up activity.

WC thoughtfully gave CD a red singlet that would have fit me. WC helped CD drape it over her body, the hem dragging on the floor like a wedding gown train. CD spent the scrimmage at or near the center of the field of play, dazzling in her singlet, low hanging staff card and now, her water bottle dangling near the floor too.

The scrimmage was brilliant mayhem. OB stood stoically on defense, clattering cleats in a crouched position. WG flew by him, and everyone else, to score the first goal, followed by celebratory cartwheels. Soon later she barely missed and did cartwheels anyway. CC stood on the periphery of the action. TG walked away to go to a carnival.

MC told OB he didn’t have to stay on defense, so OB clattered by himself to the offensive end and stood in front of the goal, waving his arms yelling, “I’m open, I’m open!” The offside concept is yet to be introduced.

CS scored to even things up, but WG quickly countered with a second goal from an angle that would have done Ronaldo proud. I needn’t note what she did next.

Throughout the drills and scrimmage, WC and MC encouraged and praised. “Great OB!” “Nice touch CC!” (even if he completely missed the ball) “Good run CS!” “Great try TB!” Not one word of correction or criticism.

The scrimmage drew to a close and I don’t think any kid knew the score – or cared. Flush-faced and satisfied, both squads were called by WC and MC to form a close circle and put toes of one foot in the middle, touching in spirited camaraderie. The instructions were inaudible, but it seemed like a foot version of the rah-rah exercise usually done with overlapping hands, followed by a rousing “Go Team!”

They let out a great, incomprehensible cheer, and we all went our separate ways. WC came over and said, “We love having OB in this program.”

We love it too. Who needs the World Cup?