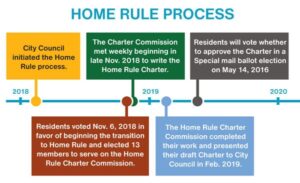 Home sweet home; home cooking; home is where the heart is. The word “home” conjures up warmth, happiness and comfort. Except in Erie, where a somewhat contentious November election faces voters as a proposed transition from a statutory form of government to home rule government is on the ballot.

On July 12, following a period of community comment, Erie Trustees voted to begin the process by placing the “Home Rule” question on the November ballot.  Voters will also choose nine members to form a Home Rule Charter Commission from a slate of 18 candidates who submitted petitions by the August deadline. If the Home Rule question passes, the newly elected Commission has 180 days to draft a Charter which Trustees must put before the electorate in November, 2023. If the Home Rule question fails, the issue is closed and the Charter Commission will not be seated.

“Home Rule is a form of government based on a charter written by residents rather than following state statute. It is based upon the theory that the residents in the community know best how to solve local issues. A Home Rule Charter could give you the chance to determine if Erie should become a city or stay a town, whether the Board of Trustees should become a council, what the term limits are for elected officials, and so much more. Going Home Rule could affect finance, taxation, land use, elections, and administration in Erie.” 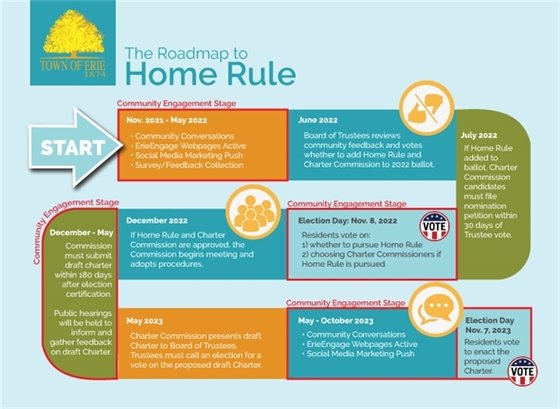 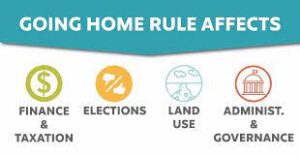 About 93% of Colorado residents live in home rule communities. As a result of rapid growth, Erie is now the largest – by population – town or city in Colorado that operates under a statutory form of government. So what’s the rub? Who could possibly object to the “theory that the residents in the community know best how to solve local issues?” As any good lawyer might say, “It depends.”

It depends on whom you ask.

Although Erie has a growing Democratic majority, the town is still starkly divided on many issues in recent years. For every Black Lives Matter lawn sign, there seems to be a Trump 2024 flag on the back of a pick-up truck. Pandemic mask mandates roiled the town with some businesses strictly compliant and others conspicuously defiant. Part, although certainly not all, of this ideological divide falls on the opposite sides of County Line Road, which serves as a symbolic demilitarized zone between Weld and Boulder Counties. A quick review of voting patterns shows shades of blue to the West, and a mix of red and purple to the East. Erie has multiple groups on social media where anything from polite conversation to character assassination can be found. During the height of COVID tension, Erie even divided along coffee shop preferences!

While Home Rule is not explicitly a partisan issue, the politics of this issue are complex and fascinating. Having local decisions made by local folks is highly desirable, as long as the local folks are your folks – and that’s the rub.

On each side of this divide are highly disparate views on the role of government and the nature of the community going forward. Parsing out these views requires a close look at recent history and a review of public positions and social media statements made by Charter Commission candidates.

The voices in opposition to Home Rule have been critical of Town Trustees, past and present. A $1 million scam related to bridge construction in 2019 is a repeated theme in the “don’t trust government” chorus. This criticism should be moot, as the approval of a Home Rule Charter will bring with it a newly elected City Council, ostensibly reflecting the desires of the majority. But the issue refuses to die.

Perhaps anticipating the approval of the Home Rule question in November, several candidates for the Charter Commission are suspected of being potential saboteurs. This mirrors the strategy of several recent Republican administrations, where cabinet officers were appointed to lead departments whose missions they opposed.  Evidence of this potential sabotage emerged in mid-October when a Commission candidate placed a handwritten “Vote No . . .” sign in his lawn. The flipside reads “too expensive,” which is factually incorrect. 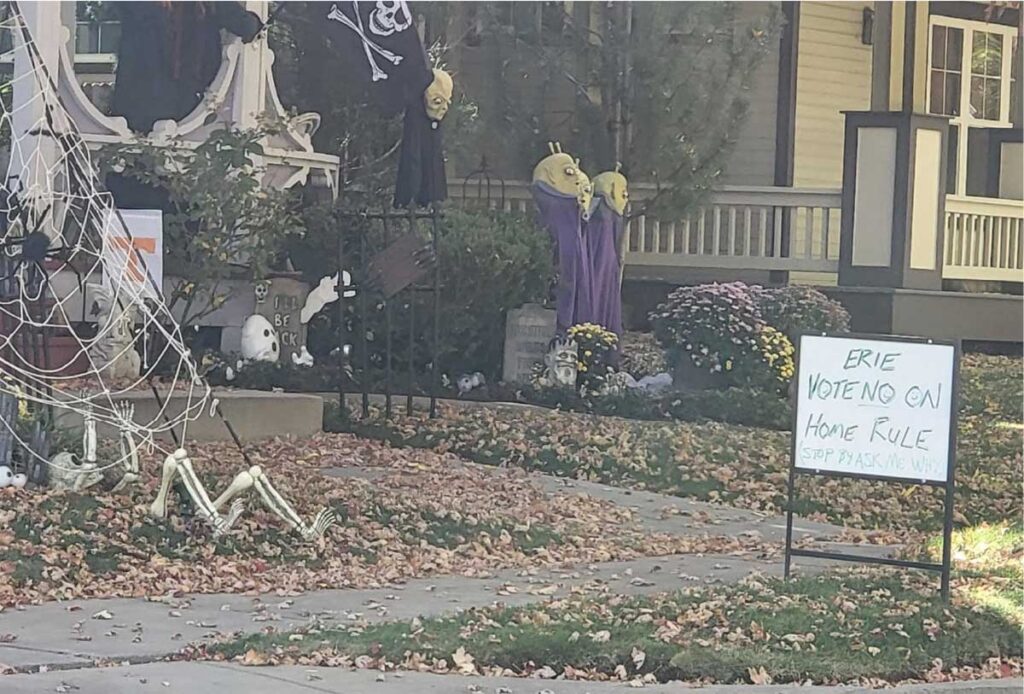 While the traditional shift to Home Rule lends more power and authority to local governance, the opposite can also be true. A Home Rule Charter could also severely circumscribe the powers of the Council and Administration. The make-up of the Commission will be more important than the vote to approve Home Rule itself.

Embedded within the somewhat arcane debate over the form of government are matters of great consequence for the community. Growth in recent years has been explosive, as a quick drive through the area reveals. Once a small village made up of old homes and dirt roads only a few decades ago, Erie’s population has grown to more than 32,000 on its way to a projected 47-50,000 by 2035. By many accounts Erie’s infrastructure and tax base have lagged behind the growth and all sides see the need for prudent planning as the boom continues. Erie is increasingly affluent and 91% white.  There is an understandable tension between affluent “newcomers” and long-time residents, many of whom feel economic and social pressure.

Generalizations can be hazardous, but it nonetheless seems generally true that many businesses want fewer restrictions on residential and commercial development, while the majority of residents seem to prefer stricter zoning and enforcement.

Conservatives generally support current and future oil and gas exploration, which provides minimal tax revenue, while their political opponents are concerned about the environmental consequences; local, regional and global.

Many liberals hope to see an investment in affordable housing, but their conservative counterparts see affordable housing as unaffordable. Home Rule skeptics worry about a spendthrift progressive majority acquiring more open space, while their political opponents fear that poorly managed growth will erode the delicate balance of development and open space that makes Erie so desirable.  Conservatives see commercial development as essential to providing a mix of tax revenues that will not overwhelm residents.

Each side accuses the other of being supported directly or indirectly by outside interests.

The last few town elections hint that a majority of voters will support the Trustees in their recommendation to move to Home Rule. If so, the composition of the Charter Commission will be critically important.  Given a quick review of candidates, it is likely that the Commission will be ideologically divided.  Whether or how they can negotiate these differences will be fascinating to observe.

Regardless of one’s political inclinations, this is a major inflection point for one of the most dynamic and growing communities along the Front Range.

Here are a few valuable resources to guide Erie voters as they make their voices heard:
https://worldpopulationreview.com/us-cities/erie-co-population
https://erieco.us/home-rule-charter
https://leg.colorado.gov/sites/default/files/r20-540_issue_brief_on_home_rule_charters.pdf
https://voteyesforeriehomerule.com/

Herein are the names of all 18 Charter Commission candidates who will be on the November ballot: https://www.erieco.gov/DocumentCenter/View/17132/Resolution-22-104-Home-Rule-Charter-Commision-Ballot-Question 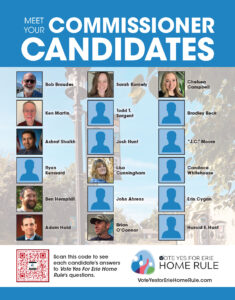 Here are the candidates who answered the Vote Yes for Erie Home Rule Commission’s Q&A that can be found here: