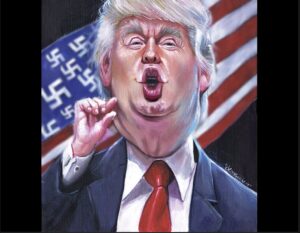 A great many rational people, and more than a few slightly irrational folks, seem mystified by the never-ending Trump show.

Trump himself is not a daunting subject to analyze. He is, and always was, a pathological narcissist, a serial womanizer, an unrepentant fraud, and a remarkably capable sociopath who can lie without a tell. For the uninitiated, a “tell” is an unintended gesture, twitch, or other giveaway that allows a poker player to know when an opponent is bluffing. Or perhaps his “tell” goes the other way and he twitches when he tells the truth. Who would know?

But what about so many others in this disturbing era? What should we think about politicians like New Hampshire’s Senate candidate Don Bolduc who believed the 2020 election was stolen until he didn’t? Or the candidates who were fervent right-to-lifers until their poll numbers tanked or their mistresses were pregnant? Or the 147 Republican lawmakers who refused to certify the 2020 election despite no shred of evidence of fraud?

Throughout the land the Big Lie lives on. Most readers can provide their own list of amoral sycophants who cling to Trump despite the stench. Many are Ivy League graduates, which should lead us to reexamine college ranking schemes. Breathtaking hypocrisy has become so ho-hum – or perhaps so ubiquitous – that it hardly merits a second glance.

Much of this phenomenon is explained by the quest to gain or retain power. Many politicians will say anything to get elected. I’ve lived long enough to have given up hope that they will revert to principle once elected. There are, of course, many admirable legislators including principled Republicans like Liz Cheney and Adam Kinzinger. But the stubborn support for Trump defies logic.

Initially, Trump ended up serving as a useful idiot for conservatives who would have rather seen any other candidate in 2016. Spineless men like Ted Cruz were insulted and ruthlessly attacked in the 2016 primaries. They railed against Trump’s incompetence and lack of character until he became the nominee, after which they serially debased themselves. As humiliating as it should have been, at least they were getting much of what the GOP wanted: a virtual makeover of the federal judiciary; tax cuts and deregulation for their corporate benefactors; a generational Supreme Court conservative majority. But why now, when those long-sought ends justified the tawdry means, don’t they move on?

Apparently, according to most political analysts, it is because so many Republicans fear being supplanted by a MAGA candidate in primary elections or losing to a Democrat if they openly depart from the Big Lie or other far right craziness.

It really is quite astonishing. My political biases notwithstanding, I can’t imagine that most Republican leaders are actually that blind. Trump is conspicuously ignorant, garishly narcissistic, blatantly corrupt and obviously dishonest. He faces possible criminal charges for tax fraud, election fraud, obstruction of justice, violation of the Espionage Act and was impeached twice. And yet, the GOP remains Trump’s party. How is that possible?

It is possible because Trump unleashed the power of white, racist, homophobic, misogynistic nationalism. To Trump, Make America Great Again initially meant military strength, fighting terrorism, advantages in foreign trade, tightening the southern border and other GOP mainstays. He didn’t, at first, understand the long-simmering resentment his slogan would arouse. But when tens of thousands of fervent fans flocked to his rallies, he began to recognize the genie he let out of the bottle. From that point on, he wasn’t leading them. They were leading him.

Anyone following Trump over the years know he has no values or strongly held convictions. He was pro-choice then pro-life. He was a Democrat then a Republican. His only consistent qualities were; the need to be liked, to be a celebrity, to be surrounded by fans and to be admired for his wealth. His reputation in New York City was as an arrogant, preening fool. He was considered boorish and was never embraced by “high society”- not that such an embrace should matter.

There is no better evidence of his bottomless need for approval than his response to an interview question about QAnon, the bizarre conspiracy cult. “I don’t know much about the movement, other than I understand they like me very much, which I appreciate . . .” Unlike Groucho Marx who famously quipped, “I refuse to join any club that would have me as a member,” Trump was delighted to join any club that would have him.

In the dark, conspiratorial, white nationalist corners of America he found the adoration he desperately needed. He easily embraced their values as his own, since he has none. Their increasingly rabid support held him hostage. Now they are holding an entire political party hostage.