Through a slate of dynamic, empowering, and entertaining concerts, region’s premier LGBTQIA choruses to continue ‘Building Community Through Music’

DENVER (August 17, 2022) – Disney PRIDE in Concert, a musical celebration of LGBTQ life, love, family, and perseverance, is among the lineup of Denver Choruses 2022-23 season, the Rocky Mountain Arts Association announced today. The Denver Gay Men’s Chorus (DGMC) and the Denver Women’s Chorus (DWC) will each present three concert series, continuing its tradition of educating about LGBTQ history and the challenges that remain as they strive for equality and full inclusion in society.

Colorado’s oldest and largest LGBTQ arts organization, the Rocky Mountain Arts Association is the umbrella organization of the two choruses.

In a Colorado premiere, DGMC will be among the first choruses to present Disney PRIDE in Concert, scheduled for late March 2023. The concert draws inspiration from Disney’s beloved catalog of songs from iconic films including The Little Mermaid, The Lion King, and Mary Poppins to modern classics Coco, Zootopia, and Wreck-It Ralph and the magical music of Disney Parks. The concert event will feature a 25-piece orchestra, accompanied by choreography and visuals using assets from Disney’s films and archives. 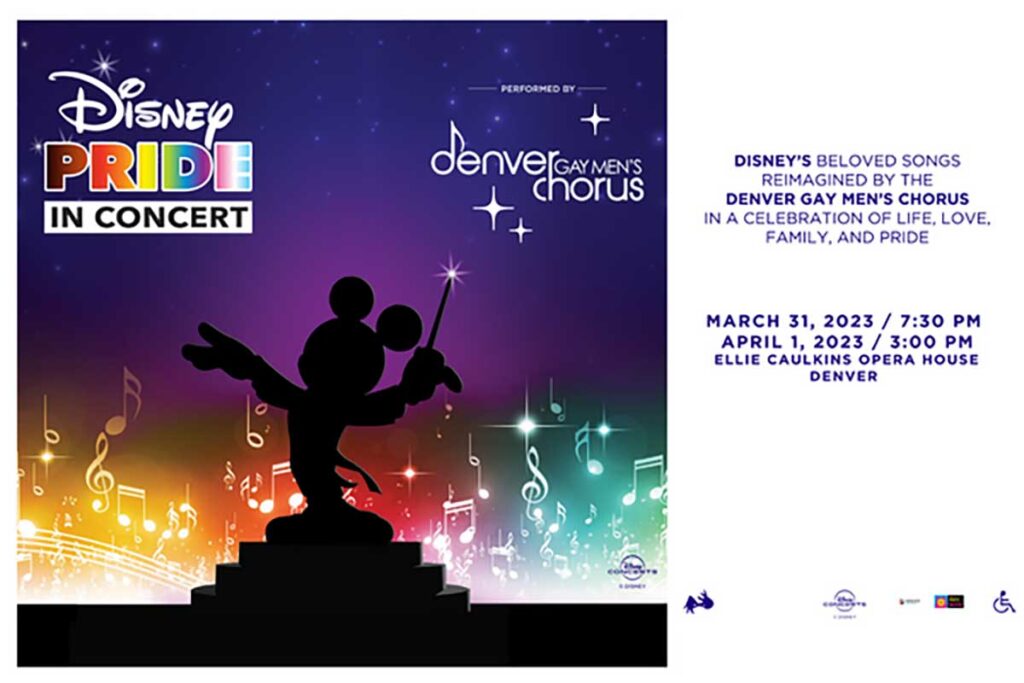 “Disney movies and musicals have long resonated deeply in the LGBTQ community because they often mirror experiences in a society that hasn’t always been welcoming,” said James Knapp, Artistic Director and Managing Director, Denver Gay Men’s Chorus. “The concert will showcase the individual meanings and connections from Disney’s timeless and universal music. This collaboration with Disney Concerts, Inc. marks a Colorado premiere, and DGMC is among the only choruses to perform.” 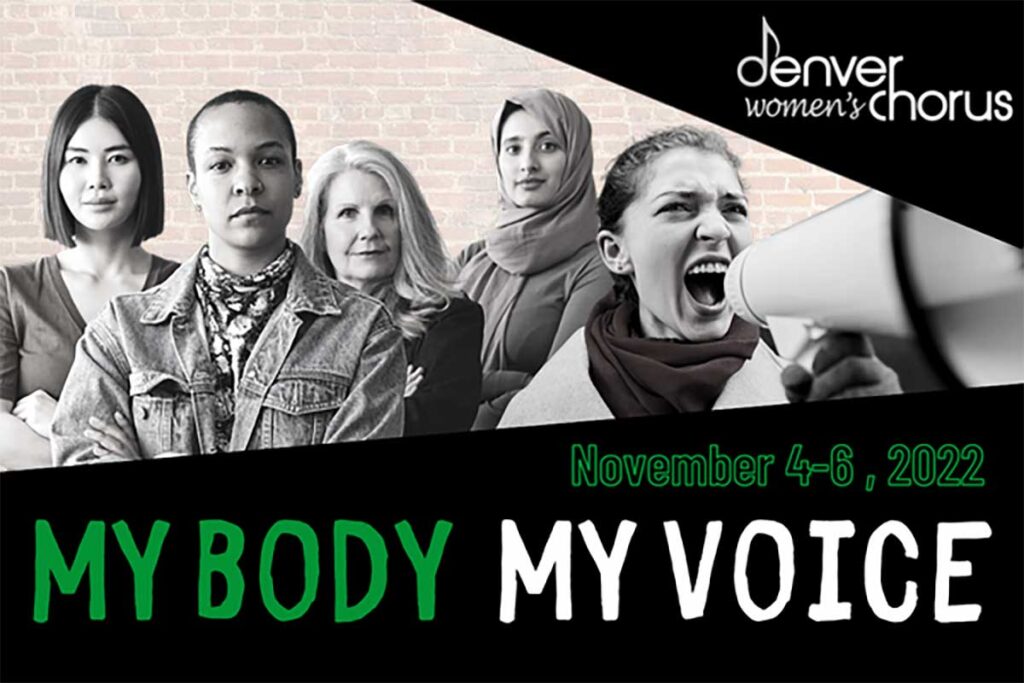 My Body, My Voice
DWC will kick off the season in November, raising their voices in support of bodily autonomy and reproductive rights with My Body, My Voice. The concert will feature songs of protest, bravery, and resilience from Brandi Carlisle, Alicia Keys, Beyonce, and composers Andrea Ramsey and Melissa Dunphy. Saphonia, conducted by former DWC artistic director Marla Wasson, will take the stage with DWC as guest artists in this dynamic performance.

Haul Out the Jolly
A kaleidoscope of classics, traditional, and pop favorites await audiences in DGMC’s annual holiday show in December. Haul Out the Jolly will include JS Bach’s Jauchzet Frohlocket, “Peace on Earth/The Little Drummer Boy,” “The Chanukah Song (We Are Lights), “Rudolf the Red-nosed Reindeer,” “Go Tell It on the Mountain,” “Raise Your Glass,” and a selection of Christmas camp audiences have come to treasure. Accompanied by a three-piece band and grand organ.

P.S. I Love You
In February 2023, DWC presents P.S. I Love You, celebrating the lives and legacy of jazz greats Cole Porter and Billy Strayhorn. The intimate concert will feature classic standards like “Let’s Fall in Love,” “Lush Life,” and “I Get a Kick Out of You,” sung by DWC and backed by Denver’s top jazz players.

Holding Out for a Hero
In their first ever solo concert, DGMC’s a cappella ensemble Off Kilter! will pay homage to their musical heroes, celebrating the iconic musicians of our time with new arrangements, choreographed numbers, and performances that will leave audiences stunned! In addition to the house band, each Off Kilter! member will perform a jaw-dropping solo by one of their musical heroes.

Earth Songs
In May, DWC will heighten awareness of climate change, leaving audiences loving the earth and ready to recycle in Earth Songs. Skip the “Big Yellow Taxi” and hop on public transportation to sing along with Joni Mitchell, Melissa Etheridge, and more.

Tickets for all concerts are available now. The complete schedule is below. Concerts begin at 7:30 pm nightly unless noted; Saturday dates include a matinee featuring ASL interpreters. Visit https://denverchoruses.org for more information and to purchase tickets.

Additionally, Saturday evening shows from Denver will be presented via live stream.*

*Holding Out for A Hero with Off Kilter! will not be presented via live stream.