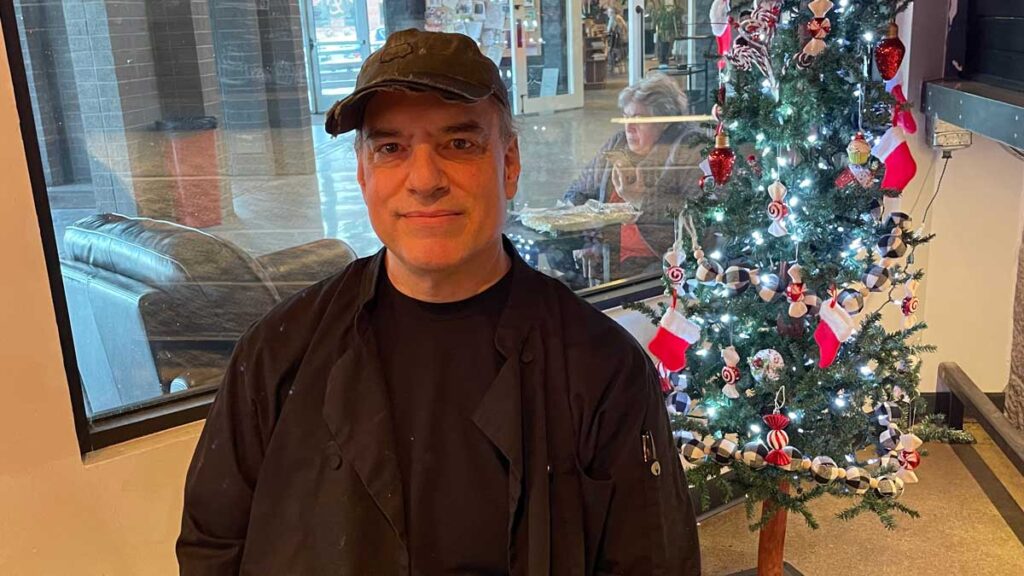 We caught up with John Bauer, the executive chef behind Kenny Lou’s Deli and Sushi in Lafayette, at the end of a long day. Although he said he got in later that morning than usual, he admitted that typically he’s on premise as early as 5:30 am. 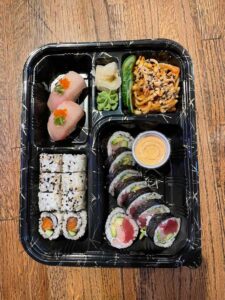 At work, Bauer is steadily busy as he supports not just the deli and sushi, but Button Rock Bakery. He looked tired and energized at the same time, like someone who knows they’re doing what they loved. He seemed to easily accept that he didn’t get a rest after a hectic Thanksgiving week, and wasn’t expecting anything more anytime soon. At this time of year, his immediate future was full of items for Hanukkah meals and Christmas celebrations.

I come from New Jersey, where Chicken Parm was enjoyed at least weekly; taylor egg, ham and cheese was a breakfast go-to; and bagels and deli items were something you could get at the corner shop down the street. In fact, I even spent time serving three-inch tall sandwiches from a small deli on a corner of my home town. For me, walking into Kenny Lou’s was like going home.

I was most interested in learning about the Jewish and Italian food at Kenny Lou’s. Bauer allowed me to sample potato latkes garnished with chutney and sour cream, as well as one of the most delicious versions of matzoh ball soup I’ve had in a while. With these kinds of items on the menu, it’s not surprising that at Yom Kippur this year, and for other Jewish Holidays in years past, Kenny Lou’s was flooded with orders.

Originally from Pittsburgh but having spent significant time in Chicago, Bauer’s first Colorado experience was taking a train to Glenwood Springs in 1989 for a photography internship. He extended the experience in Breckenridge where he also did black and white fine art  photography. While he was there, he cooked and when he moved to Boulder, he experienced a Boulder that existed a generation before all of the shops and restaurants people know of today.

As one of his jobs, Bauer manned the grill Aristocrat Diner on the corner of Broadway and Spruce. “I cooked on a flat top griddle that reached from here to there,” said Bauer, spreading his arms as wide across his chest as he could and pointing across our table.

As follow up work, he took on a couple of other jobs including one at Pour La France where Pasta Jay’s is now. Anthony Hessel, who headed up Pour La France and later served as Executive Chef at The Med, hired him as a line cook and they became friends. Bauer met his wife in Nederland and cooked in South Carolina before coming back to Colorado to cook for rock stars such as Elton John at Red Rocks.

With all of his experience and his lengthy Boulder resume, one of his passions is connecting with people through the Jewish and Italian food he gets to make at Kenny Lou’s. He comes from an Italian family, and his wife has a Jewish background. He appreciates how food in both of those cultures isn’t just something you put on a plate but an event. 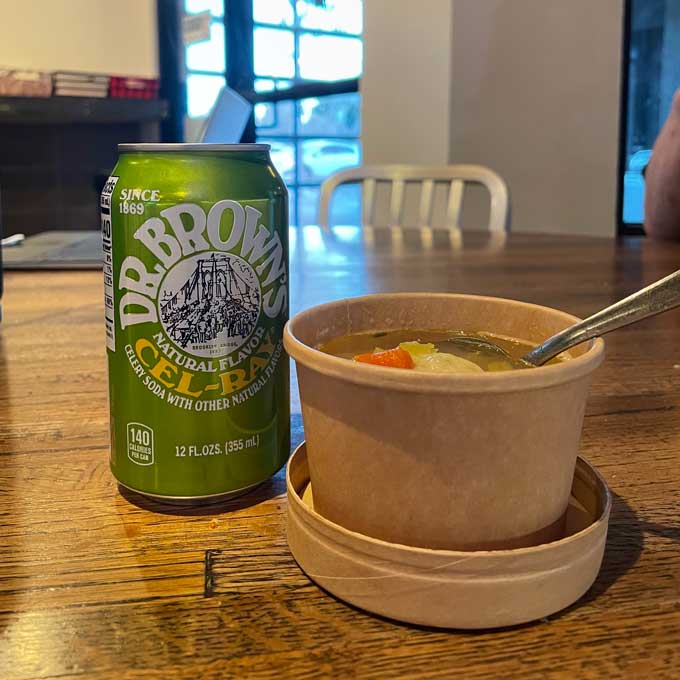 Beyond that, Bauer also loves Deli culture. “I want to keep real corned beef alive. Real chopped liver alive. Real tongue alive. I want to offer  sandwiches, latkes.” He elaborated further, saying that one of the biggest sellers is the veggie burrito made with latkes. “And the Matzoh Ball Soup, I can’t keep it in stock. I’m making 40 quarts in back right now.”

Bauer made a point to share that one of his favorite things was preserving this culture, especially for people like me who knew about it at one point in their lives. He then referenced a move, Deli Man that is currently playing on Disney+:

“If you watch it, Deli Man is how I feel. I want to keep this tradition going. The old school delis in Chicago, I learned a lot about what I like to eat in Chicago. You go in and you see a lot of baked goods, the challah. That’s what I like. That’s what I’m proud to serve.”