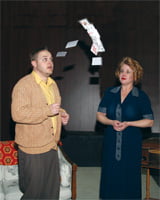 Curious Savage
Some claim that the estate tax is little more than state-sponsored Fascism. Those on the other side argue that it is one of the things that separate America from the old European feudal systems. Either way, we’re betting that if your dad died and left $10 million to your stepmother, which she decided to use to set up a fund to help other people fulfill their dreams, you’d be pretty torqued. The new Gaslight Theatre Company (housed in a renovated vehicle repair shop) debuts in Westminster with the production of The Curious Savage. Welcome this new addition to the neighborhood and enjoy a hilarious show.Thru April 19, Gaslight Theatre Company, Westminster, 720.232.7285

Once On This Island
Does love conquer death? An age-old question, the answer depends on the religion to which you subscribe—or whether there are divorce lawyers in the hereafter. Either way, the question is tackled in the Caribbean-themed, one-act musical Once On This Island, written by Lynn Aherns with music by Stephen Flaherty. The play details the life of Ti Moune and her struggle to find love despite dealing with class and race issues and the whims of jealous gods. Kind of a Romeo and Juliet meets Clash of the Titans meets The Little Mermaid (Hans Christian Anderson’s version, of course). Directed and Choreographed by Colin Roybal. April 4-26, West Colfax E-Vent Center, Lakewood, 303.232.0363

Fiddler On The Roof
Tradition is a central tenet in Jewish life. With 5,678 years on the Jewish calendar, one of the only things that connects the culture across the eons is the adherence to traditions. Holiday celebrations and familial events are approached in a similar manner today as they were 50 years ago, as they were a thousand years ago. And a lot has changed in that time, too. Fiddler On the Roof is the story of Tevya the milkman, living in a Shtetl in Russia, fighting in vain to preserve traditions that are disappearing while trying to keep his family together. Fiddler remains one of the most performed and beloved works of musical theater today. April 25-May 17, Longmont Theatre, Longmont, 303.772.5200