Suspenders
Dubbed one of the Top 10 Plays to look out for in 2008 by a certain Boulder daily newspaper, Suspenders is an entirely local effort; a musical written by Nina Davis and composed by Debi Stevenson. The show explores the lives of senior citizens living in a modern retirement community (think Cocoon without Steve Guttenberg and the aliens, or not. We haven’t seen it yet, we’re just guessing here). The preview is free May 20-21, and includes a talk-back session with the artists. Support local talent and enjoy the follies of old people, all at the same time! 7:30 p.m., May 23-June 1, Longmont Theater, 303.772.5200. $10 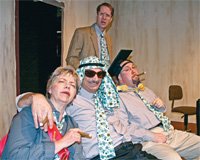 The Memorandum
Constant surveillance, enormous bureaucracy, laughable government—sound familiar? Can you believe the President was able to write an unbelievably poignant and clever satire about these topics? No, not Bush (as if!). We’re talking about The Memorandum, one of the most-oft performed pieces in former Czechoslovakian President Vaclav Havel’s repertoire. Granted, when he wrote the piece, it was a stinging attack on the politics of the Soviet Union and communism in general, but its application today is certainly ironically timely, wouldn’t you say? Madge Montgomery directs this international classic (new translation by Paul Wilson) for the Theater Company of Lafayette. Billed as a “Comedy about communication or the lack thereof,” we’re betting the Dilbert generation will heavily identify. 7:30 p.m., Friday-Saturday, May 9-31, Mary Miller Theater, Lafayette, 720.209.2154. $10+

Sight Unseen
The concept of selling-out is an old one in the arts, and is something that gets revisited by 17-year-old coffeehouse miscreants and burned-out hippies every time their favorite band you’ve never heard of gets signed. Donald Margulies speaks about it with sublime grace in his 1992 play Sight Unseen, balancing it carefully against themes such as love and jealousy—the result was a Pulitzer nomination. It may be more than 17 years since the play’s premiere, but, as with all great works, the themes are as timeless as the backdrop is dated. Mare Trevathan directs this production at the Paragon Theater. 7:30 p.m., Thursday- Saturday, May 3-31, Paragon Theater, Denver, 303.300.2210. $17+