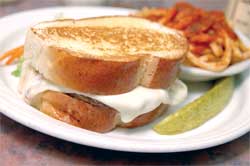 You might remember the frenzy that stirred back in 2007 when Blue Parrot thought of changing the name of its beloved Wopburger to something a little less, well, offensive.

For those who aren’t hip to Blue Parrot’s colorful past, the restaurant was founded by the Colacci family back in 1919 as a haven for Italian coal miners. In the early days of the restaurant’s existence, the Wopburger was born, a natural fit for a family that considered themselves “wops.” Only a year ago, however, one of the restaurant’s patrons took offense at the burger’s name.

Much to the delight of the Blue Parrot’s regulars, the Colacci’s didn’t fold, meaning regulars and newly transplanted Louisville residents alike can still order the 89-year-old concoction of spicy sausage on buttered toast with provolone cheese by its non-P.C name.

And I did, as one would expect of a critic reviewing a restaurant nearly a century old with rabid loyalists.
Blue Parrot is halfway between The Old Spaghetti Factory and Old Country Buffet. Servers jet back and forth in shorts and T-shirts that proudly profess: “I ate a Wopburger at Blue Parrot.” And when it comes to ordering, the jovial sarcasm of a restaurant where everybody knows everybody else is just the norm. A few times my friends and I asked for a refill of this or an extra basket of that. The answer was always the same: “NO,” followed by sarcastic laughter.

As we swapped bits of Chicken Cacciatore ($11.50), Wopburger ($6.25), and Ravioli ($11), the din of young families eking out an evening meal flooded in and out. In some restaurants, this amounts to an uncomfortable evening, noise penetrating dinner table conversation. At the Blue Parrot, it made for better people watching than I’ve enjoyed at dinner in a long time. Instead of holding up invisible walls to separate privacy-obsessed patrons, the servers acted as dizzying court jesters, cracking jokes while drawing tables into conversation over the unfortunate loss of pasta in a 2-year-old’s lap.

I dare say the sausage—the fixture of both my cheese-filled ravioli and, of course, the Wopburger—was delicious. Plump enough to stay juicy, spicy enough to add pizzazz and large enough to satisfy, it could easily be eaten on its own. Without mustard.

The ravioli, however, could easily have been once frozen and mass-produced. The ricotta filling was meager, and frankly, a bit bland.

Leaning over the table after a sip of my friend’s Italian Margarita (a mix of tequila, triple sec, amaretto, and sweet-and-sour with a sugared rim), I forked up a bit of his olive-oil baked cacciatore. The trials of cooking chicken are always the same: impending dryness and ultimate blandness. And while the dish didn’t blow me away, it was a tasty, salty-sweet pair for the homemade (and incredibly long) spaghetti noodles that basted in marinara beside it.

Ah, yes, the marinara. As the menu proudly states, Blue Parrot offers its own tomato sauce in grocery stores nationwide. But if my sampling was any example, poured haphazardly over my ravioli, I doubt I’d go out of my way to purchase it at the store. It was fine, but it lacked character indicative of being homemade.

Our meal ended with a creamy Tiramisu ($5.25) and refreshing, Tri-color Spumoni ($4.25). My only complaint here—not enough.

They were both delicious.

As we wandered out by the bar on our way out, our server jovially wished us a great weekend and urged us to come back—which I would, but more for the experience than the food.

Blue Parrot is a Louisville institution and offers a chance to check out local history. It’s a place to watch neighborly antics, to have fun, and (let’s face it) indulge at least once in the most contentious of its menu offerings—the infamous Wopburger.