Get a Brain, Get in the Game 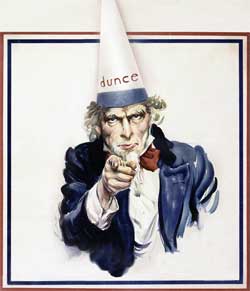 Polls are jet fuel for the news media. They give the partisan pundit gasbags something “new” to talk about—who’s ahead and by how much, how the latest political ad is changing opinions—and analyze ad nauseam on nearly a daily basis.

But the surveys that have caught my eye recently are those showing the abysmal lack of basic knowledge by college grads of things like math, science, history and geography. Knowing how to calculate simple interest can save you money when shopping for a credit card or car loan. But what’s the use of knowing which planet is closest to the sun (Mercury) or who the chief justice of the Supreme Court is (John Roberts)? Will that knowledge earn you more money or add to your sex appeal?

Studies have shown that the more you know the more you make. And the Playboy Playmates almost always list “intelligence” and “sense of humor” as “turn-ons.” So you have that.

Even more compelling is that the more you know about history, government and current events, the more likely you are to be registered to vote and, most importantly, actually vote. And that’s a good thing, because we want people who have a clue about where our country has been or where we are now making election decisions that will chart our future.

So it’s a little discouraging to find, thanks to National Geographic, that by an almost 2 to 1 margin, more youngsters between 18 and 24 could name the latest American Idol winner than identify Iraq on a map. And less than half could locate New York on a map as well.

All this matters because politicians, especially the desperate ones who are scrambling to stay in power, feel that they can lie to our faces in their effort to convince us that we should vote for them. Their 30-second commercials become the basis for our historical and political knowledge. And when that’s the case, we’re doomed.

Without knowing the facts for ourselves, we become pawns in a game rigged against us in which the rich and powerful become more so at our own expense. Even today, some 40 percent of Americans think that Iraq and Saddam Hussein were the ones behind 9/11—a lie repeated just last month by Republican veep nominee Sarah Palin in a speech to the Alaskan National Guard.

And forget about depending on the media to call BS on the BS. A majority of the traditional media quit doing their job about eight years ago (or longer, depending on whom you ask) and they basically let politicians declare that the world is flat without telling us any differently.

As H.L. Mencken said: “Democracy is the theory that holds that the common people know what they want, and deserve to get it good and hard.” So if you feel that you’ve been ridden hard and put away wet for the past eight years, the solution to all this is simple, and relatively painless. Start paying attention and maintain a level of skepticism about most of what you see on the news and all of what gets shoveled as political ads. And register to vote and then do so. Because in all seriousness, the future of our country is in our (You all remember “We The People,” right?) hands and this election has no less at stake than the future of our republic.

Or you could just tune in to The Daily Show and the Colbert Report and laugh as you learn from these political pundit spoofs. Because a recent survey by the Pew Research Center for the People and the Press found that people whose primary source of news was Jon Stewart and Stephen Colbert were more likely to be able to identify Vladimir Putin than those who got their news from Fox News, daily newspapers and even National Public Radio.

And besides, who doesn’t want to be funny, smart and sexy during this election season?