Ruff on the Neighbors 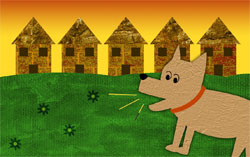 You shouldn’t mow your lawn with a loud, gas-powered chopper at 6 a.m. on the weekend. It’s common courtesy to hold out and allow neighbors some uninterrupted sleep. The same should go for dog owners bringing their loud pups to play at any of Boulder County’s dog parks. Just because they are open at 6 a.m., doesn’t mean you should bring your barking pup to the park, thus waking nearby folks who want nothing more than to sleep a little longer on the weekend. Hence the current controversy at Lafayette’s Great Bark Dog Park. Some neighbors have complained that the early morning noise is keeping them from sleeping on the weekends and want the city to tweak the hours. Sounds like a valid complaint since not all of us like being woken before brunch.

[What’s Next] It’s doubtful that the hours will change, but let’s hope that owners of chatty dogs show a little consideration by avoiditng doggie social hour at 6 a.m.