A mother in Mead, Colorado reached out to ask, relatively casually, “Wondering if you had heard anything about the incident at Mead HS yesterday?”

Yesterday would’ve been Tuesday, May 18th.

“Mead is a small, rural community located 29 miles north of Boulder in Weld County. … A fun fact of Mead, CO is that it was the filming location for Die Hard 2. The majority of the filming took place at the town’s historic Highland Lake Church,” and is the town’s main claim to fame, apart from their annual Sugar Beet Festival.

It’s not the kind of place you would expect to make state, and potentially national, news. That is, unless you’re familiar with the racial dynamics of small towns, in an area of Colorado – from Denver North through Loveland – that’s rife with white supremacist activity, right wing organizations, heavily armed militias, and a history of KKK activity.

The racial dynamics of America – given ongoing police brutality and impunity –  have made waves across America In recent years. Police brutality was nowhere so grossly personified as in the Spring 2020 murder of George Floyd, where officer Derek Chauvin smirked with his hands in his pockets for 9 minutes, 29 seconds, including 2 minutes 53 seconds after George Floyd had already died and was unresponsive.

The subsequent, massive, global protests and demands for justice that took over the streets of Colorado, particularly Denver, through the early months of the pandemic in 2020, and which resulted in numerous class action lawsuits, new legislation governing police activity, and hundreds if not thousands of assaults of citizens at the hands of violent police, were an expression of a world absolutely done with letting police get away with actual murder.

It should be noted that Gordon McLaughlin was sworn in as the district attorney for the 8th Judicial District this past January, representing Larimer and Jackson counties, and just this afternoon indicted two officers for police brutality and complicity with brutality (not the official charges), in the arrest of a 73 year old women with dementia. He said, in part, “Without that law being passed, SB 217, I think this would have been significantly more difficult to prosecute.” This is a direct outcome of the George Floyd murder.

The profound impact of reporting around the trial of George Floyd, the non-stop television coverage, and particular and specific information learned from the testimony of Dr. Martin Tobin – a physician with the Edward Hines Jr. VA Hospital and Loyola University Medical School in Chicago – thoroughly debunked defense attempts to mislead about George Floyd’s cause of death. The testimony, and subsequent conviction, left the world breathing a little bit easier. A collective sigh and cheer erupted internationally as viewers watched Derek Chauvin’s eyes dart back and forth as he was convicted on all counts.

One would think that that painful chapter in history had closed, in spite of the fact that former officer – and current and future prison inmate – Derek Chauvin filed appeals. But… Mead decided that wasn’t going to happen. On May 18th, one student painted his face in blackface and his friend smiled wide for the camera as he kneeled on his friend’s neck. A third kneeled on his back. An unknown number took photos and Snapchats, which is where the image was first discovered.

This is, of course, exactly how George Floyd was murdered, literally snuffed out by a police state that refuses to value non-white lives, which has a history of impunity and disregard for black and brown lives specifically.

The high school student with the black face on had put his face in a diesel truck’s exhaust pipe, then scraped the pipe for more soot to apply. 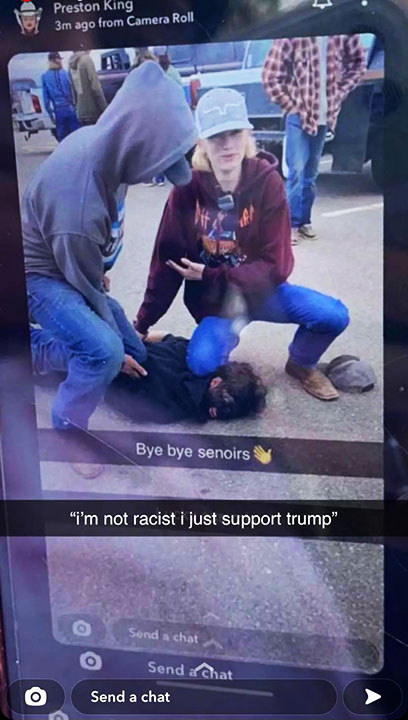 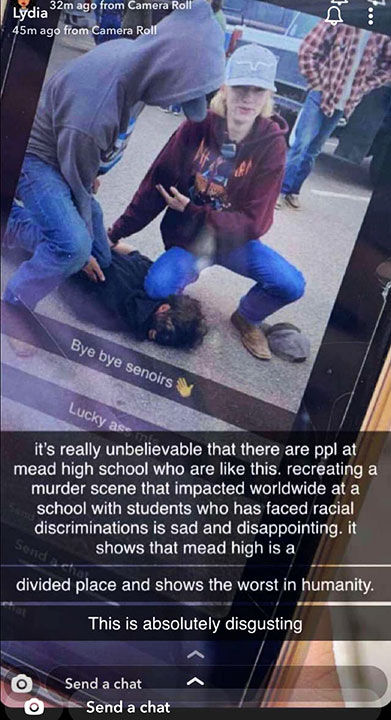 The mother who contacted us said, “My son just showed me a post from a friend who goes to school there. I haven’t heard anything about it in the media and am hoping there will be consequences for the students. My son said lots of racist things have happened there (said there are lots of “white hicks” that go there)… but that the principal never does anything about it.”

A letter, which appears to have been sent to Principal Ayers, which had the sender’s name redacted, said in part, “[redacted] understands that not everyone in his friend and on social media and that people can use things to twist and harm him with their opinion of how they want to view something. After speaking with [redacted] and seeing the post and knowing that he did not threaten anyone, make any racial slurs, or purposely harm anyone we believe no further action or discipline is necessary. As for the student who forwarded this post to you that is their opinion and they have a right to view it any way they want [sic]. This appears to be a letter in support or in defense of the student in black face, presumably from a family member or friend. 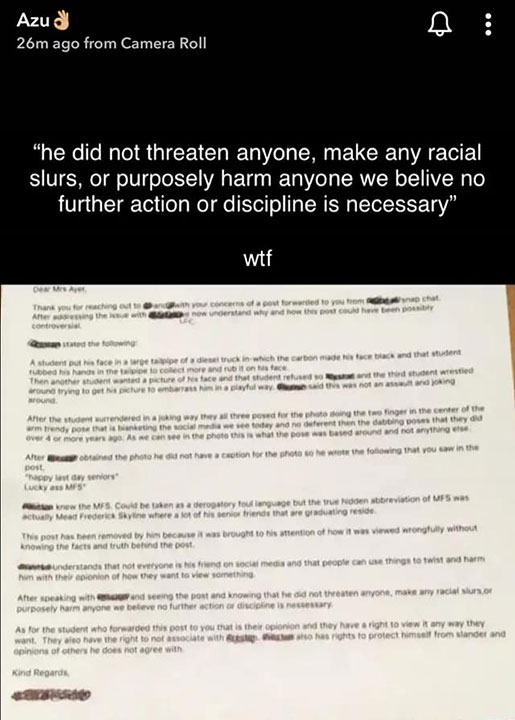 I can’t help but wonder if the person who sent that correspondence has any idea about the impact of racist behavior on the emotional, psychological, and intellectual safety and development of their peers. The research is widely available. Ignorance – especially around education – is a reprehensible choice. Much like being a racist or tolerating racism.

9News has also reported on this incident, and says St. Vrain Valley School District is investigating but has no comment. An email to principal Ayers was not replied to as of the time of publication. This will be updated should that change.

The Principal of Mead High School sent an email, which acknowledged the incident, and said in part, “we take this type of conduct very seriously and have begun an investigation into the mater.” They are also offering counseling to students who may need it. Questions can be directed to 720-494-3940.” 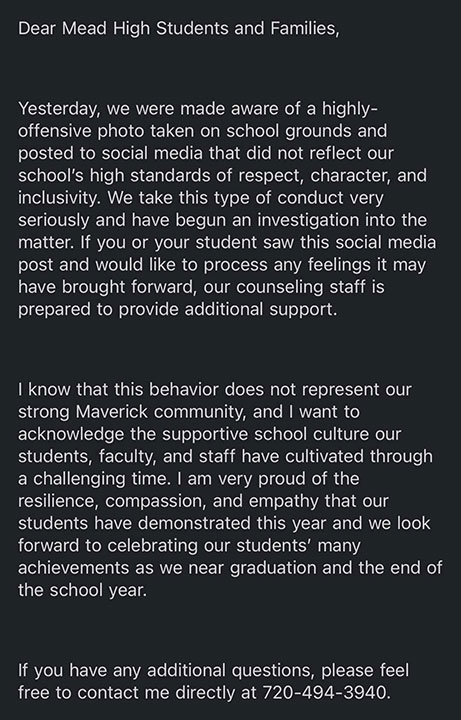 You can reach out to St. Vrain Valley School District Equity Department here:

This story is breaking and will be updated.