On holding Biden’s feet to the fire, disproportionate policing, and white supremacists: the Colorado Capitol on Inauguration Day 2021 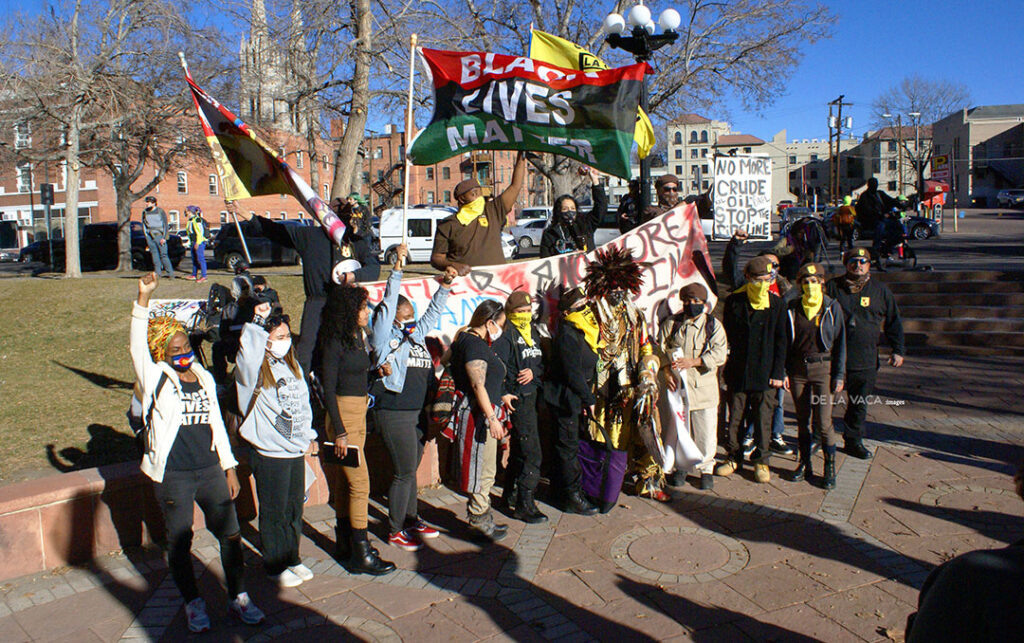 It was a strange morning. January 20th had been in progress since the midnight before and it was just after noon as I left I left my home in Erie and stopped by the local gas station for a cup of coffee and gas. President Biden and Vice President Harris had already taken their oaths of office, Jennifer Lopez had already sung, and Arlington cemetery was abuzz with cannon shots and the official presidential motorcade. As I drove the county roads on my way to the on-ramp, heading into downtown Denver, I noticed the city seemed much more alive than it has in quite some time. This is inauguration day.

It was a view of the town that struck me as being at odds with what I felt inside, knowing I was on my way to photograph and document at the Colorado State Capitol as left leaning rally-goers sought to send a message to Biden and Trump’s death cult pro-coup MAGA-stans were supposed to be massing to demand his installment as king…bit I digress. Here I was in Erie and there were kids walking down back roads where I’ve never really seen people walk before. The streets were bustling. Local work sites were filled up and busy. Maybe it was the 56-degree day, in the middle of winter, or maybe it was me projecting hope or optimism onto a day that, I have to admit, I have been slightly dreading.

It was a nice reminder that even if parts of the world fall apart, not all parts of the world fall apart, that even if parts of America are falling apart, it’s not all of America. Even if Denver might be roiled with turmoil, lots of areas around the Front Range and across our state are holding it together; forward facing, gorgeous, and shining bright like a new administration on its way to the White House to hopefully (don’t hold your breath too long) undo the damage Donald J. Trump inflicted.

Arriving at the Capitol it was clear that none of the Trump supporters, the #MAGAcoup crowd, the white supremacist overthrow collective, were going to make it. I was pointed to a group of about five – “if you wanna see fascists, look over there” on the edge of Lincoln and 14th streets, with masks on, taking pictures and hanging out, but otherwise not engaging. I was also pointed to a “Karen” who had apparently been attempting to instigate, pretending to be a journalist, who had been escorted out a handful of times already.

At this rally, hosted by Colorado Brown Berets and Denver Communists, there were about 200 participants, over the course of the day. They came with intention, to send a message to the newly-inaugurated Biden-Harris administration that the children in the cages needed to be released immediately, that oil and gas pipelines have to be killed, that wars have to be ended, that Black and Native lives matter, and that racist policing has to be curtailed.

And that last part, in itself, is an excellent point because I was here at the state capitol on January 6th as the #GOPcoup acted in sedition and stormed the U.S. Capitol Building. I was here on the Colorado State Capitol lawn, surrounded by right-wing militia members, where I was ultimately shoved into traffic, which was summarily ignored by the Executive Protection Unit of the Colorado State Patrol. There were at least three times as many Trump supporters on that day, but a clear half of the total cops deployed for today’s peaceful rally. The CSP officers today were there from the beginning, not deployed later in the day, as it appeared on January 6th.

Arriving January 6th I was able to hang out for hours before officers arrived or made their presence known. Today, officers were everywhere, obvious, on all four sides of the capital, on both balconies, on side streets, parked at the RTD terminal, willing to walk through the middle of a crowd to insulate a right wing agitator – instead of preventing his incursion – with pepper ball gun in a show of force; a show that told the crowds, yet again, that the officers are always on the side of white people, on the side of white supremacy, on the side of the violent agitators.

There were also armed bike patrol officers on site and, as we know, bike units are there like mounted (horse) units as a riot control measure. The bikes are used as mobile barricades. I approached a sergeant with the bike division on the north side of the Capitol and I asked him if he could explain to me why there were multiple deployments of officers, including riot control measures, when this level of response wasn’t given on January 6th… but I didn’t get my question answered because he motioned to his officers to leave and they fled. That’s correct, they fled a member of the media asking reasonable questions. I later tried to ask the sergeant what his name was, but he ignored me.

That is the Colorado State Patrol, exempted from the state law to hold officers accountable, SB 217, but tasked with and enforcing Denver City policies; a lovely loophole for Colorado state police repression to continue without accountability.

To the final point, there were left-wing community defense organizations on site to help insulate and protect from white supremacist aggression. That was necessary because – apart from the fact that #MAGAtraitors had claimed intent to hold 50 capitols hostage today – on at least three occasions, excluding events that transpired while I wasn’t around, white supremacist agitators approach the crowd, attempting to engage and disrupt. The patrol members on site didn’t prevent that, didn’t engage them, didn’t protect. The agitators were all grown white men. There were children in the crowd at the rally.

White supremacy attempted to rule the day, even though the crowd on the capitol grounds should be allowed to engage in their first amendment rights without threat of violence. That’s literally why the officers were on site, but it seems they only defend constitutional rights, First Amendment rights, when it’s the right wing demanding to be heard. It’s the same as January 6th, where officers were lined up and facing counter-protestors while the officers facing the MAGA crowd were just hanging out; this I witnessed after I was assaulted and shoved in traffic, but it was ignored by officers who told me to get out of the street. 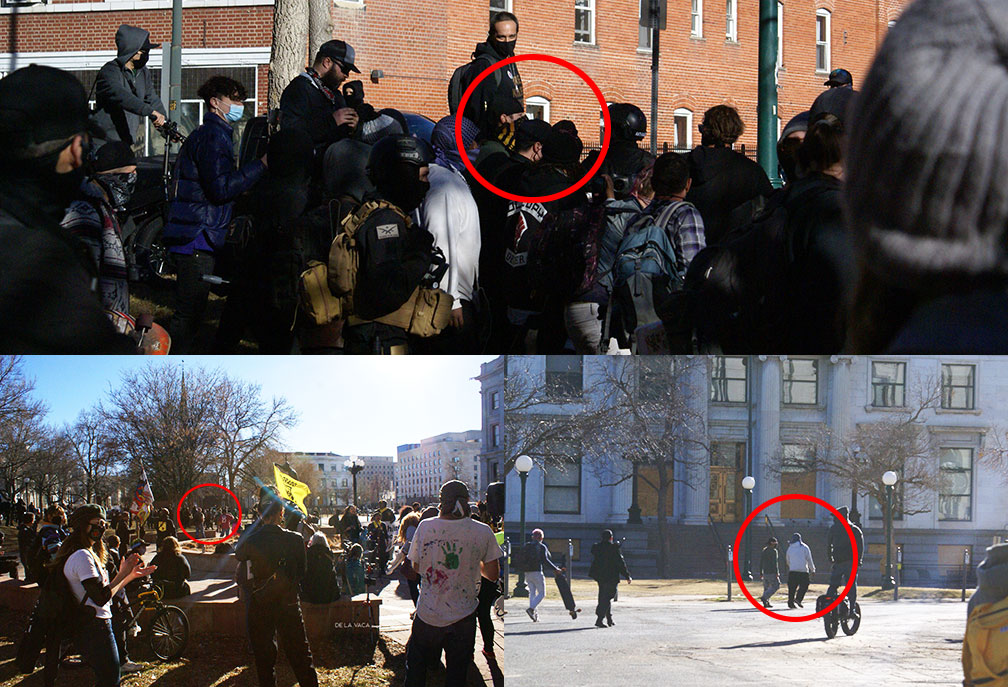 I’m reminded of watching Biden’s inaugural address this morning, and his claim of a peaceful transfer of power, the first in a long line of lies I expect from his administration. Power in America has never transferred as peacefully as people believe it has over the last 240 years but, if there ever was a violent transfer of power, this year was it. We should be clear that it’s Black and Brown bodies, Indigenous bodies across the nation, that fought tooth-and-nail to prevent Donald Trump from having a second term. We can’t forget that it was nearly one-hundred-thousand white supremacists who attended Trumps #SaveAmericaRally and tens of thousands who stormed the US Capitol, prepared to take hostages and execute members of Congress, in an attempt to install Trump as a dictator or King.

This is a letter from #DeLaVacasDesk. 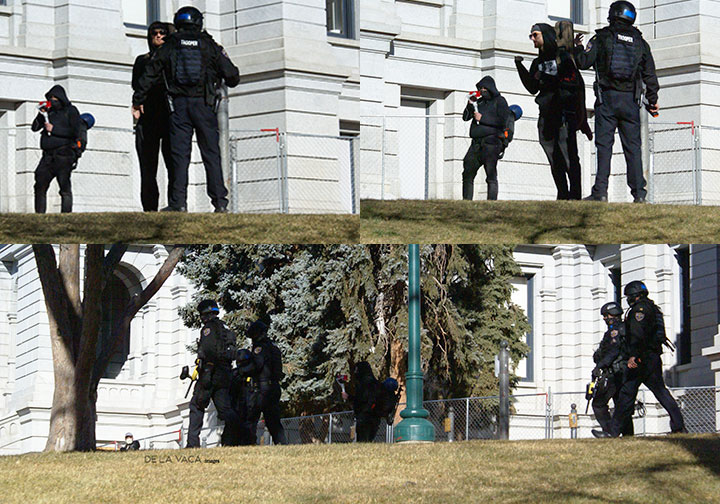 Agitator is spoken to by officers, allowed to enter rally, officers follow to protect 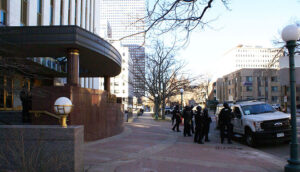 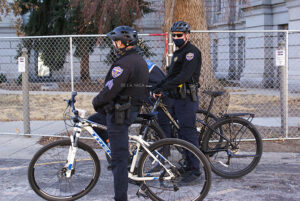 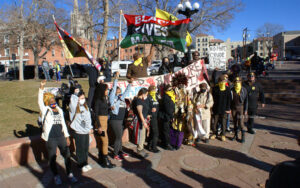 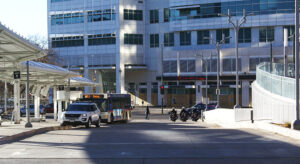 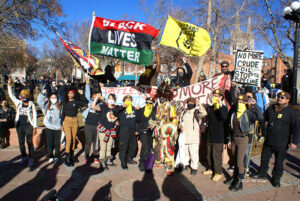 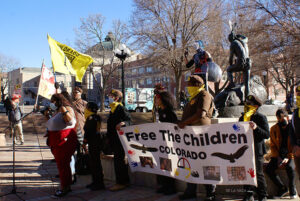 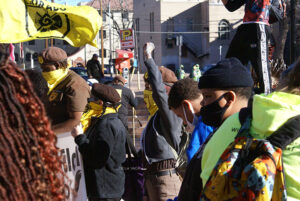 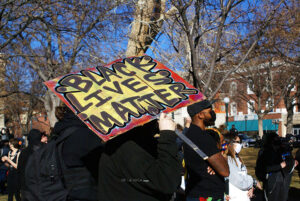 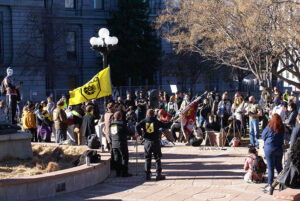 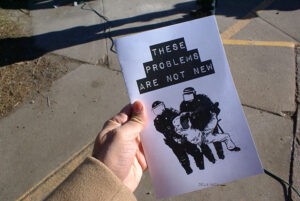 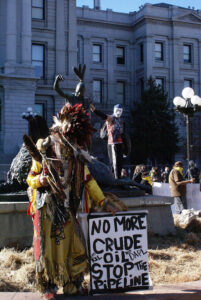 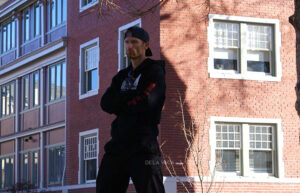 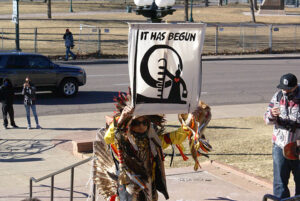 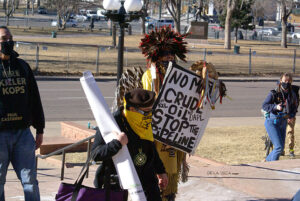 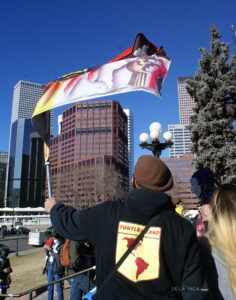 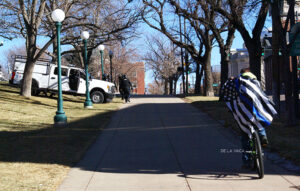 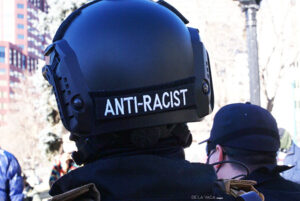 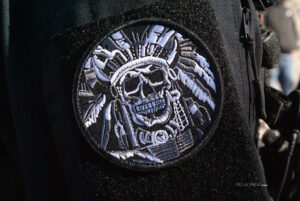 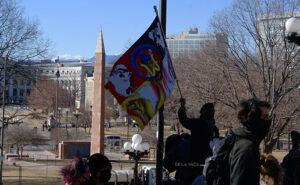 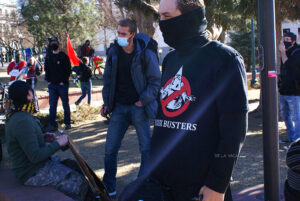 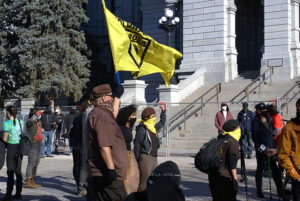