Mile High Music Fest: Traversing the Line Up and the Landscape 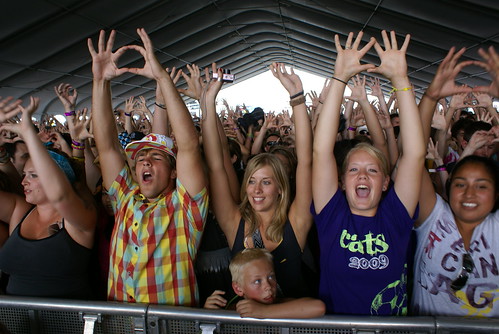 Check out photos from Andra’s visit to the fest.

The Mile High Music Festival will once again turn Commerce City into a destination for musicians and music lovers…not to mention hoards of teens sweating bullets in anticipation of seeing Boulder’s Billboard bosses 3OH!3, whose gauche anthem “Don’t Trust Me” hit the top of the charts this month.

But the gangly, suburban hip-hoppers are just one act in the refreshingly balanced line up at this weekend’s MHMF.

Buddy Guy will be wailing. Will you be there to hear him?

On five stages over two days, the Mile High Music Fest is the state’s premiere music festival, attracting both “local” bands like the aforementioned 3OH!3, The Northern Way, Devotchka and Big Head Todd and the Monsters; big names like Tool and Ben Harper; and a diverse mixture of performers with resilient followings (everyone from jamband gods Gov’t Mule to Lyrics Born to the queen of indie, Ani DiFranco).

While you should let the music be your guide during this exhausting weekend spectacular, there are some tips we can offer to maximize the good times. For more details and to see the performance schedule, hit up milehighmusicfestival.com.

Tips for fest-goers:
Last year’s MHMF was hot—like sweat-all-the-liquid-out-of-your-body hot. Stay hydrated. Drink water before and drink water after. And then drink more water when you are there. When you think you need a beer, drink water.

You gotta prep for MHMF. Check out every band you don’t know (imeem.com, Pandora.com, or heck, dusk off your MySpace page). Map out your priority shows—who you want, need, have to see—and prepare to be flexible. Compare notes with your follow fest-attendees. Maybe they know something you don’t.

Wear comfortable clothes and shoes. Yeah, we sound like your mom, don’t we? Well, kiddos, you’ll thank us later. Because of the heat, you’ll want something that you can sweat incredible amounts of perspiration onto and still feel as comfortable as possible. Plus, you’ll cover a lot of ground during this event. The five stages are spread out; there’s a lot of walking involved…not to mention, dancing and swaying and that awkward shimmying white people do when they hear Ben Harper.

Don’t be that guy. This is pretty much a rule to live by anyplace and anytime, but it’s doubly as important when there’s tens of thousands of people having to put up with your crap.

Eat a big breakfast before you go…you’ll need fuel.

Check Yellowscene.com for coverage and pictures. We’ll be in the front row—just in case you aren’t.