It’s morning, and the house on the hill is filled with sunlight, well-cultivated beauty and a sense of ease. There is coffee to drink and a plate full of pastries.

Architect Matt McMullen casually makes his way through the home: Boulder’s peerless Glass House, a glorious piece of architecture perched above the city like a multi-million-dollar peacock sporting a splendid plumage of rosy flagstone, triple-laminated structural glass and brilliance.

Calling the Glass House simply a house is like describing white truffles as fungi or Lafite as grape juice.

The five-bedroom, seven-bathroom home matches elegance and luxury with comfort and a touch of whimsy. It’s breathtaking and dynamic. It’s airy, yet it stays rooted in the soil of the Colorado Front Range. 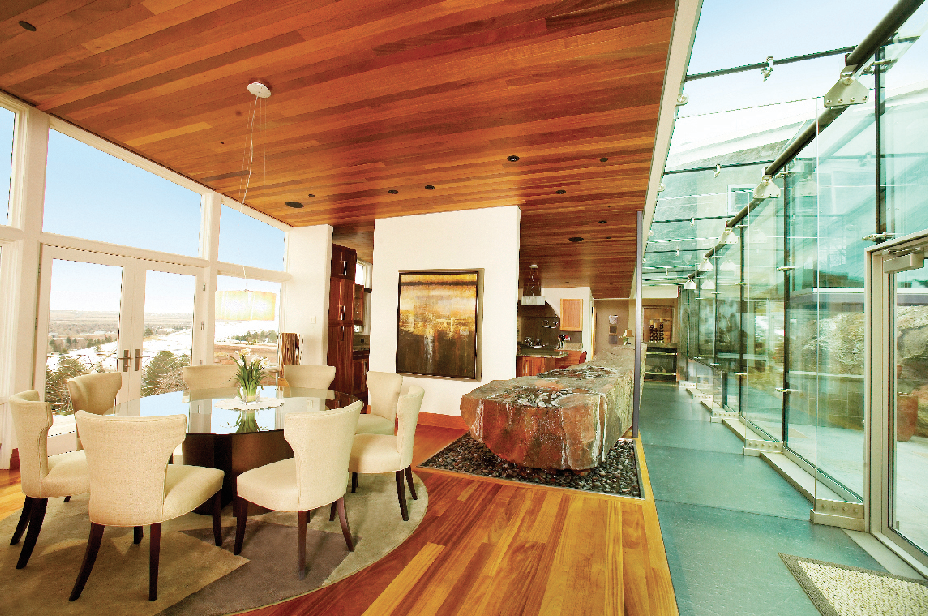 Found in a local stone yard, the large rock water feature helps to create a connection with the large boulder sitting outside and with the looming Flatirons. “As soon as we saw it, we started to talk about how to get it in,” architect Matt McMullen says. “So, we redesigned the structural system and dropped it in through the roof (before the roof was on the house).” The glass walkway is an artistic touch but it also becomes a natural light source for the floor below.

Completed in 2008, the Glass House is technically a radical renovation of an existing house. So radical that it’s completely different. Its features include—but certainly are not limited to—a home theater, wine cellar, locker room, hot tub, secret rooftop patio, a sunroom that serves as an indoor garden with a hidden hose and specialized glass ceiling, and ground-source radiant heating and cooling. Not to mention the 1,500-square-foot carriage house and a huge heated garage.

At one time, the 9,000-square-foot home attracted critical attention from a few Boulderites calling the project’s plans too big or ostentatious. Sure, the house is big and, in places, ostentatious. But the closer you get, the less you focus on the size or the fact that there’s an elevator, and the more you focus on the angles and lines, the materials and textures.

With that in mind, you’ll find that house is made magnificent by the meticulous thought, skill and care put into everything. An example: The heights, widths and angles of the glass walls were mapped out precisely to maximize the view from each room. And still, the glass of the Glass House is balanced with the warm, cozy feeling of home. 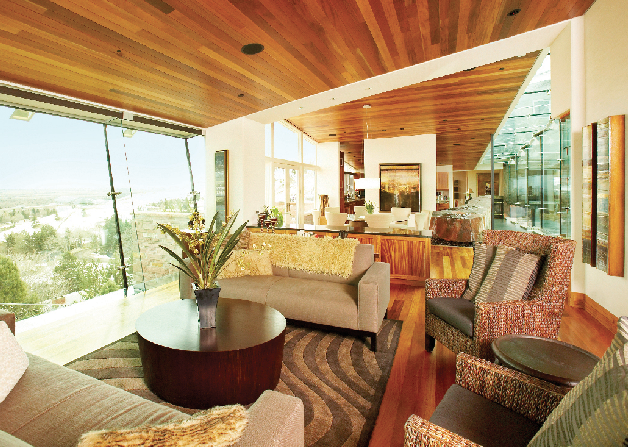 The ceilings and floors of the living room are a rich Honduran mahogany. With all the sunshine streaming in, the dark wood helps to absorb some of the light.

“A home is not an art museum. It has to be beautiful and transcend day-to-day living and the mundane, but it needs function,” McMullen says. “You have to bring all those things together. …How do you create something like this where you are not overwhelmed by the majesty?

“There are some places (in the Glass House) where you get incredible vistas and others where we’ve made these little, Zen views,” he continues.

“If all you had were incredible views everywhere, it would be overwhelming. …You gotta have a place to go hang out in your jammies.” 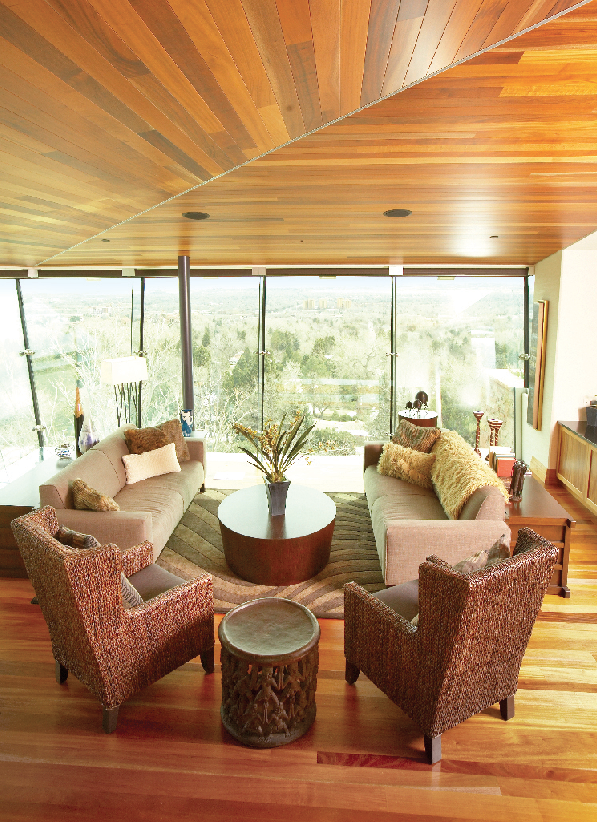 The living room is flanked by two-story Pilkington triple-laminated structural glass walls, made specifically for the home. The walls are angled outward and provide glorious views of Boulder County and beyond.

Inspired by the works of Frank Lloyd Wright and Charles Haertling, McMullen strives to bring colors, themes and imagery from the outside in. As he tells it, the Glass House was built to connect with and act as a conductor for the natural energy and beauty of the farmlands to the east and the Flatirons to the west. 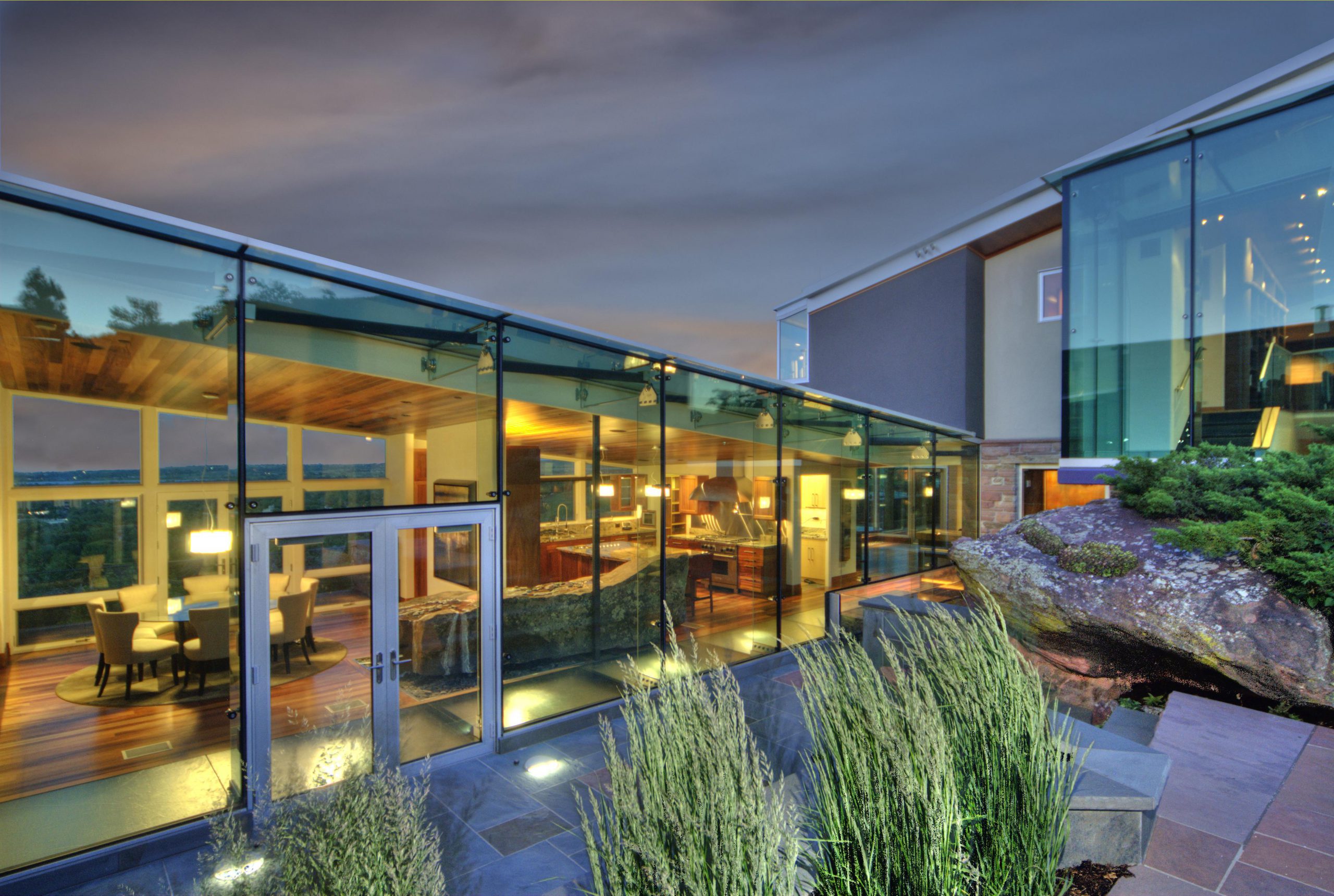 “I was sitting in the existing house, and I was watching this storm roll in,” he says. “It was one of those storms that comes in really quickly when the cool air hits the warm air and it just is tremendous. The kind of storm where you get that feeling of electricity in the air. As I’m standing there, the wind is blowing and all the doors slam shut. It’s starting to rain, so I go inside. For 15 minutes, the storm is just building and building and I’m watching it. And I’m like, ‘Wow, this is a location where weather and landscape really move through.’ You feel like you are in a way station for weather and nature.

“That’s really what led to a lot of the transparency in the home. You can look to the plains and the mountains and you are at this great edge condition. …It’s almost like a platform precariously perched on the landscape and you feel the rush of the mountains going down to the Great Plains.”

He says those contrasts—the so-called edge condition—often make for brilliant architecture (often seen, as he points out, in the modern architecture of the Los Angeles area, where water meets land). 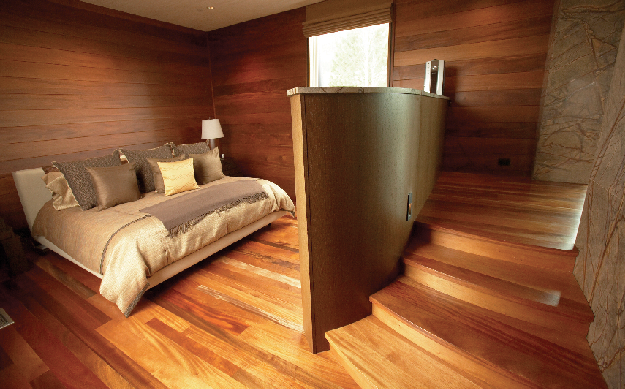 The master bedroom (bottom)—inside the “bird’s nest” that hangs above the home’s entrance (top)—is a cozy womb of curved Honduran mahogany walls. From the west-facing window, you can hear the trickling of water that rolls over the copper wall along the entrance. It was designed to harness the imagery of a marsh.

The scrupulous artist of this functional sculpture shows off his work with unpretentious charm. McMullen has genuine appreciation for the craftsmanship and labor put into the home, for the natural beauty that looms above, around and through it, and for the people with whom he toiled to create the Glass House. General contractor Russ Coover and interior designer Mickey Ackerman played major roles in making the house something exceptional. Coover and McMullen now even laugh about the challenges of implementing McMullen’s crazy ideas (i.e. a glass staircase). 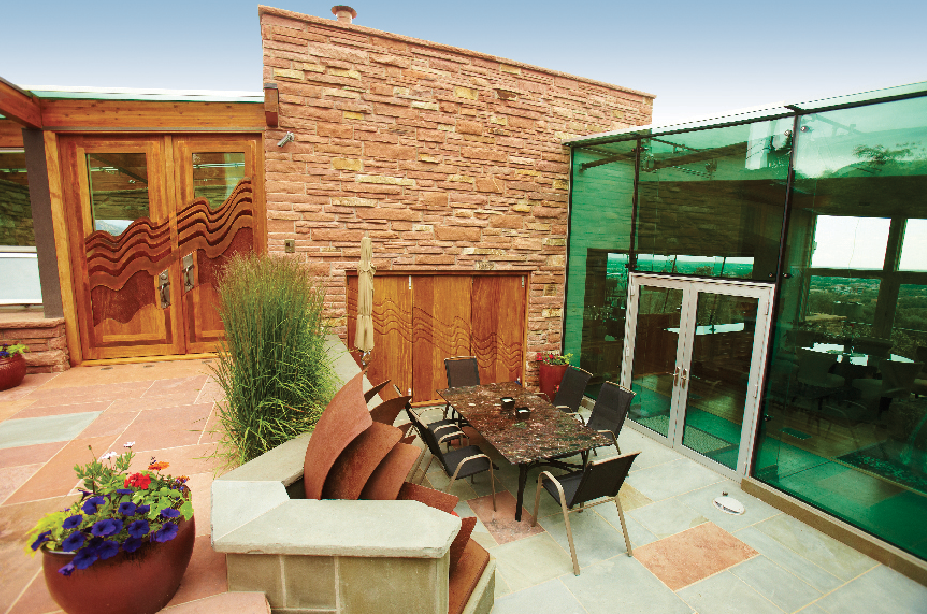 These hand-carved doors, surrounded by Lyons red and buff flagstone, attract visitors to the main entrance and lead into a simple sunroom, which is the one room remaining from the previous house. McMullen calls it a “transition space” between the ruggedness of the outdoors and the luxury of the living room and dining room. Below is an outdoor cooking area and fireplace set next to a pristine pool. 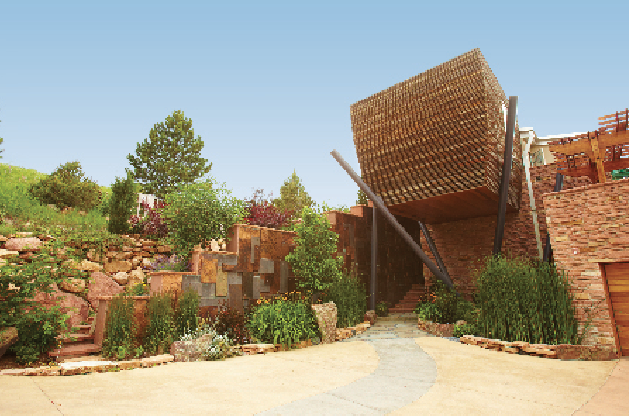 “While I may design the home and I may come up with the idea of how to approach it, it’s a mutual process. As good as the drawings are, these people are out there putting their sweat into crafting this home,” McMullen says.

“I’m just the guy who drew the thing, and they are the people who are manifesting the vision. You are only as good as the tradespeople and craftspeople who you work with.”

McMullen is aware that his work does not exist in a vacuum: Houses are about people—the people who build and create them, the people who inspire them, and the people who call them home. Today, eight years after McMullen started designing, the Glass House is filled with the warmth and energy of a family, which transcends all architectural philosophies, artistic sensibilities, and even a great edge condition.