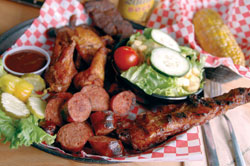 The year is 1987. You’ve just finished teasing your hair and putting on a final coat of Aqua Net when your boyfriend rings the bell. He’s got the top down on his Celica as the two of you cruise over to The Old Man for cans of Schlitz and some barbecue.

OK, so The Old Man wasn’t actually around in 1987, but you wouldn’t know it to look at it. This bar-slash-barbecue-joint that took over the red barn previously occupied by Roosters on 120th Avenue in Broomfield looks like it might have accidentally gotten pulled through a rift in the time-space continuum by an errant Delorian with a busted flux capacitor. All manner of vintage beer signs decorate the walls—there’s even a light-up Spuds MacKenzie in the corner—and the XM radio station proudly declares that it’s always 1980-something as it blares out hits by the likes of Poison and White Snake. Apart from the flat screen TVs showcasing three or four different sporting events (everything from the NBA finals to a rugby match), the place is totally old school.

The effect is deliberate and manages to feel oddly authentic instead of kitschy. When the Little Pub Co. bought the building as it was slated for demolition, they completely gutted it and started from scratch. But they wanted it to retain an old neighborhood bar vibe. Employees and family members have been carving their names into the walls and booths, and vintage photos of them hang in the spaces between the retro signage.

There’s no table service, so we grabbed a booth and studied the chalkboard menu before heading back to the counter to order. Having heard good things about the barbecue, we both ordered combination plates, one with brisket and hot links, and one with brisket and pulled pork. Three homemade sauces are offered: a Kansas sweet, a tangy mustard vinegar and a smoky chipotle. The bar serves up old school beers in cans and a few newer standards on tap. I got a Shiner Bock in a can just for the novelty.

The place was smattered with an odd mix of clientele: A guy in work clothes played rounds of video golf by himself in between bites of his chicken wings (smoked instead of fried—a specialty of the house); a woman decked out in designer knock offs flirted with the friendly bartender; a skinny white guy dressed exactly like LL Cool J circa 1992 and his friend ordered another round.

As soon as they called our order up, we dug into the enormous portions. Corn on the cob, perfect fried okra and killer baked beans rounded out our platters. But the meat did nothing to compete with the sides: It was barely room temperature and surprisingly fatty. While the mustard vinegar sauce, became more and more appealing the more we ate, the other sauces lacked noteworthy qualities. In fact, I found myself wishing I had just ordered a bunch of side dishes, which is never a good sign at a barbecue joint.

But the crowds dig The Old Man—which is something that needs to be noted. The place is usually filled with happy drinkers and diners. Surely, the patio and volleyball courts will only get more popular as the summer goes on.

That’s just how it goes. Restaurants and bars are more than just eating and drinking establishments. They are cultural institutions where we meet friends and make friends, celebrate and commiserate and, yes, even remember what life was like in 1987.