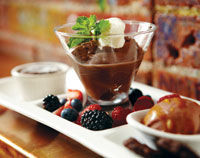 If you haven’t heard of Jax Fish House in Boulder, you’ve probably been living under a rock that does not get cable. You definitely can no longer call yourself a foodie if you’ve copped to the above. Anyone with even an ounce of foodieism should know about Jax—if not for the food, then for the reputation of its chef, Hosea Rosenberg, who won local and national celebrity with his win on Bravo’s Top Chef.

Dining trends are as fickle as fashion (though only sometimes as tasteless) and, despite its 15 minutes of televised fame, Jax is not necessarily the hip new place to try in Boulder. Yet show up there at 6:30 on a Monday night and you’ll find the patio full, the barstools occupied and the line for tables winding out the door. Why? Because it’s just damned good fish.

Platters of raw oysters sail through the restaurant, and the simply dressed tables are frequently littered with shells and lemon rinds: the remains of a happy repast. Walls of the narrow brick building are covered in crayon graffiti, where patrons have gleefully scribbled their names and added themselves to the annuls of happy customers. My husband picked up the crayons as soon as we were seated and started working on his own mini masterpiece.

There’s something sort of otherworldly about fish as a meal. It can be the height of haute cuisine or as common as a crawfish boil. Nothing in the world tastes quite the same, nothing melts the same way against your tongue, and few things are quite so capricious to prepare. A scallop might not provide the same health risks as preparing raw blowfish for consumption, but over or undercook it, and you have something just as inedible.

I am undeniably finicky when it comes to seafood. At an untested restaurant, I will eschew the fried calamari and forgo the scallops every time for fear that they will be chewy or fishy or tough. Nothing can ruin an evening faster for me than poor quality seafood; it simply turns my stomach.

At Jax, I ordered with abandon. Fried calamari as a starter was so lightly breaded as to almost be unnoticeable, but added a fine texture and crunch to the delicate mollusk. The sweet and spicy dipping sauce invoked an almost Asian quality to the dish. My husband had the chicken and crawfish gumbo, which arrived dark and heavy with spices and garnished with a whole crawfish (despite my instructions, he was too intimidated by the creature to try to eat it whole). The striped bass entrée arrived skin side up to showcase its natural beauty, but when flipped, revealed the beauty of the simple preparation in a brilliantly browned filet. As for the scallops, I was delighted to find them sweet and soft, a beautiful texture and flavor that needs only the slightest enhancement by a well-wielded skillet. We swooned over our triple-chocolate dessert—including a malted chocolate ice cream that was to die for.

The entire raison d’être for Jax seems to be creating a happy dining experience. From the glass fish mobile to the crayon-etched walls; from the house special strawberry-infused vodka and lemonade to the chocolate ice cream; from the one-dollar happy hour oysters to the most expensive filet on the menu, the entire experience is designed to make a diner abandon any fear of fish and just enjoy.