The “would you care for dessert?” that we have come to expect while dining out often leaves us groaning at the failures of culinary diversity (lots of places sell the same stuff). Luckily a few special places throughout Boulder County are bucking the boring trend of brownie sundaes and chocolate cake (ok fine, we love those, too, but we have a sweet tooth craving for more). Here’s a few culinary sweets ranging from the culturally authentic to classically simple. 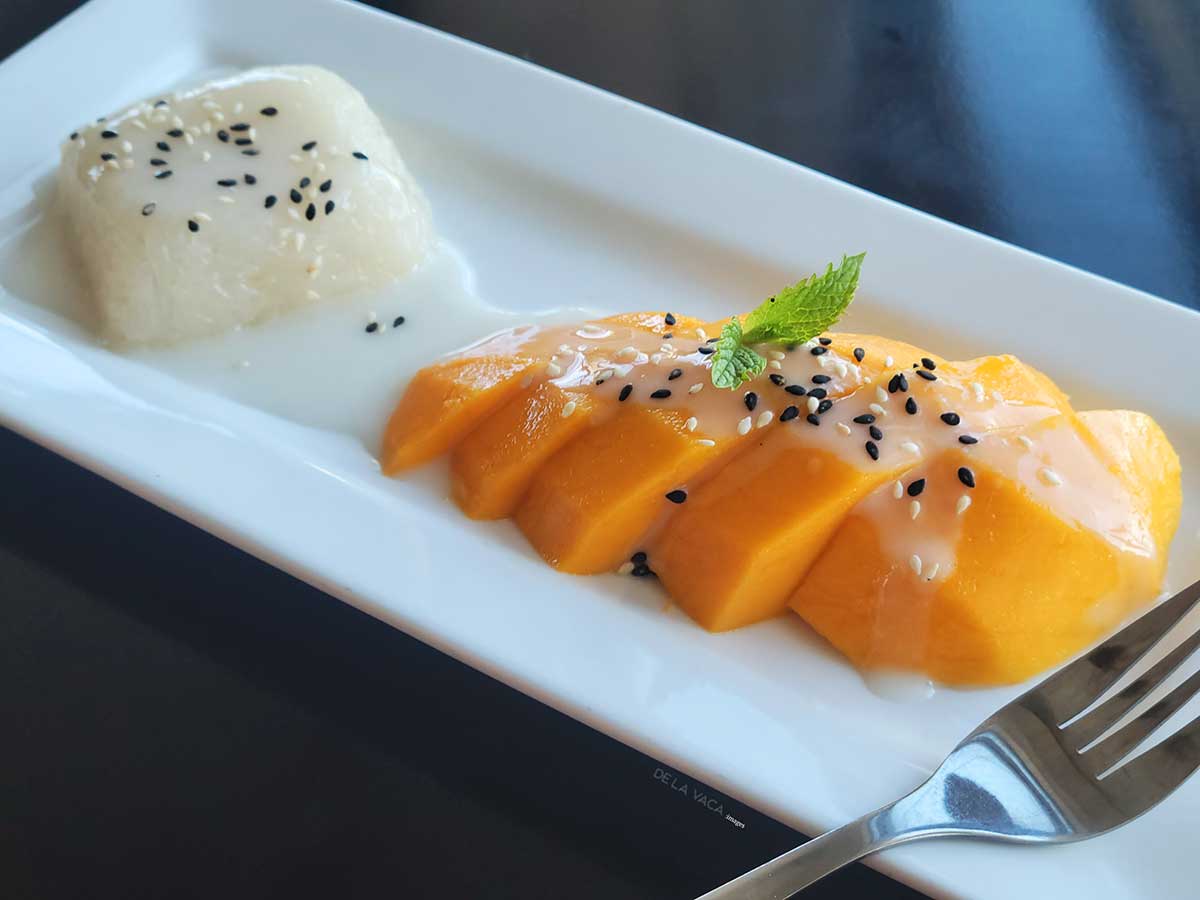 Rice may seem second fiddle to the tangy flavors of favorites like stone fruit, but this classic Thai dessert will make you think twice. Busaba’s rendition becomes an expertly executed and perfectly presented example of the intersection of culture and taste. Steamed sticky rice with coconut milk, sliced mango, and a coconut milk drizzle with a bit of chef’s secret spice fulfills the classic Thai dish requirements while the toasted sesame seeds and pandan leaf add a unique finish to this amazing desert. 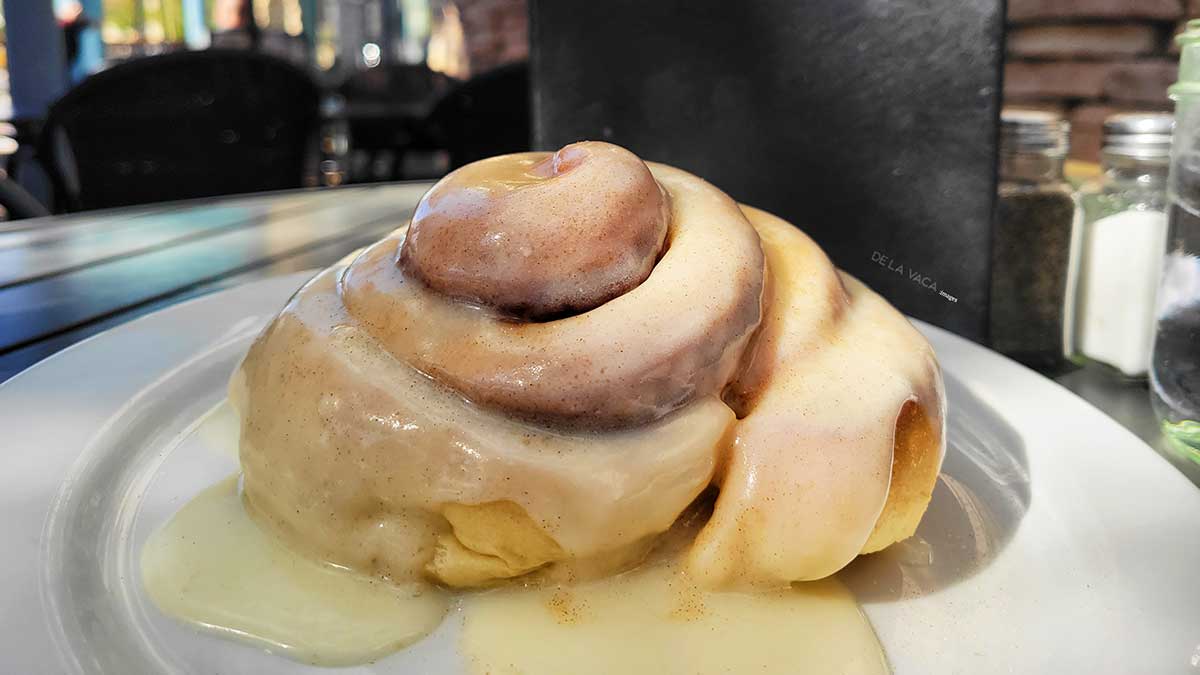 Lots of desserts seem to jump the shark lately. Drizzles, shavings, powders, sauces, and wild ingredients have seemingly made dessert into a rather complicated business. Eat! Food & Drink swings the pendulum from complex to wonderfully simple. GM Brittney was proud to present this huge and wonderfully crafted cinnamon bun for dessert. Everything is made fresh in house: the dough, the cream cheese drizzle icing, and it really creates a unique Eat! Food & Drink-perfected cinnamon bun. It looks like something set on a lavish table pontificated over as an artifact of slight overwindulgence by Dickens himself. This cinematically perfect cinnamon bun is also big enough to share with a friend. This gooey sticky sweet pastry will finish you off, leaving you licking your fingers and audibly moaning over your plate. 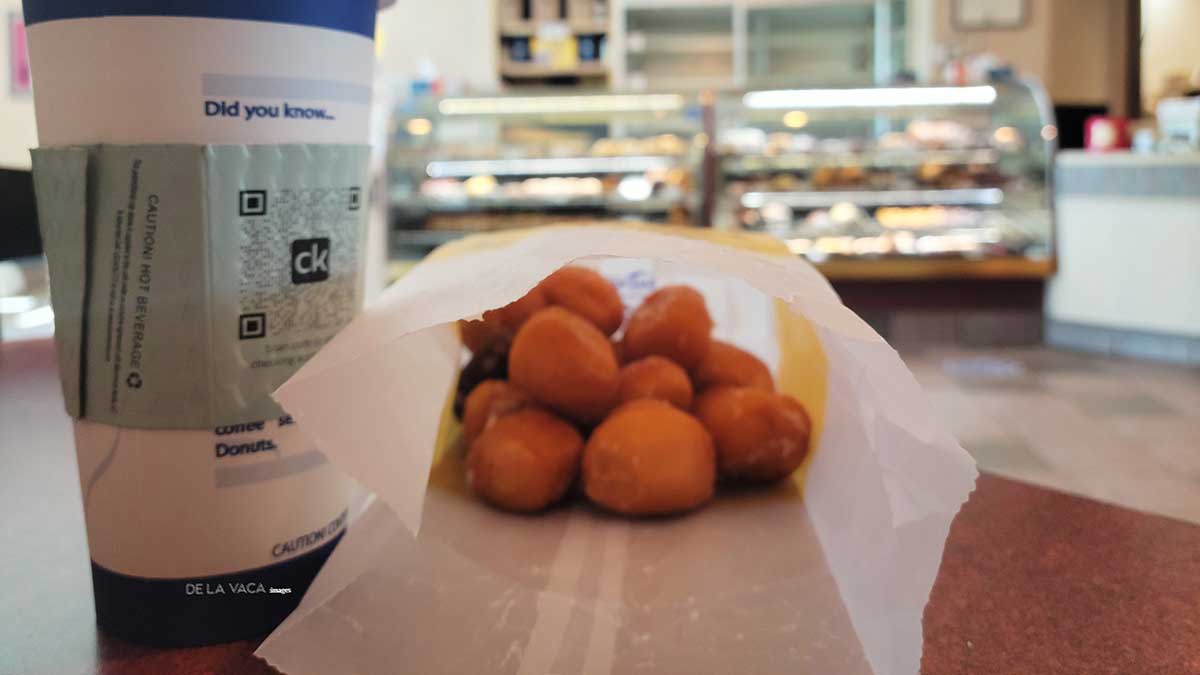 Desserts may not always be what you eat after dinner. Sometimes it’s what you get at the end of a great night. Donuts (and especially donut holes, in our opinion)  make for the perfect off-site dessert for dinner or a party. While Denver has a great selection of donut places, few shops serve up such reliably delicious deep-fried sweet dough as Lamar’s (26 stores in 5 states, cooking up genius since 1933. Our editor used to work at Krispy Kreme and loves donuts). Small bite-sized soft golden browned, glazed or chocolate treats could be considered a walking dessert, as we took hours to go and scraped some glaze off the car seats the next morning. Oh well. This easy-to-grab dessert with a cup of coffee makes for a great finish, or start, to a day. 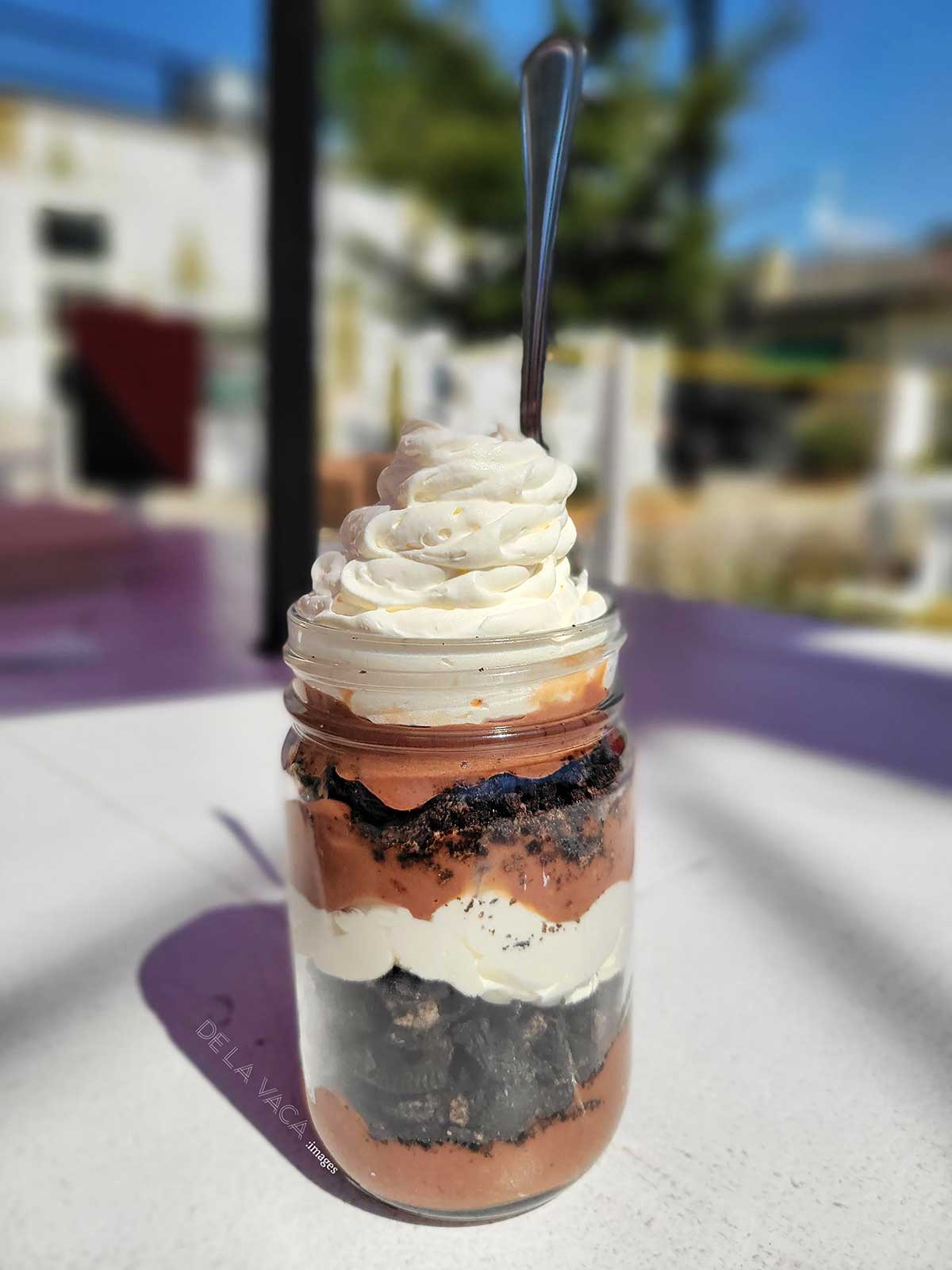 The Sink – Chocolate Oreo Mousse Pie In a Jar

When you look at a jar one of the last things people think is, “hey, I can fit a piece of pie in there?”. Conversely, stuffing delicious chocolate mousse into a jar is about the last thing you think when you see a delicious piece of pie. Chocolate Oreo mousse pie in a jar. Now that the Nabisco strike was won The Sink has developed this layered chocolate mousse pie in a jar that is a decadent dessert guaranteed to hit the mark. The Sink has plans to introduce other pie in a jar desserts, such as apple pie, cherry pie, peach pie. All in a jar. Certainly a chef favorite for being a classic dessert, this new spin certainly puts a fresh take on both presentation and overall experience of a classic high end dessert staple. 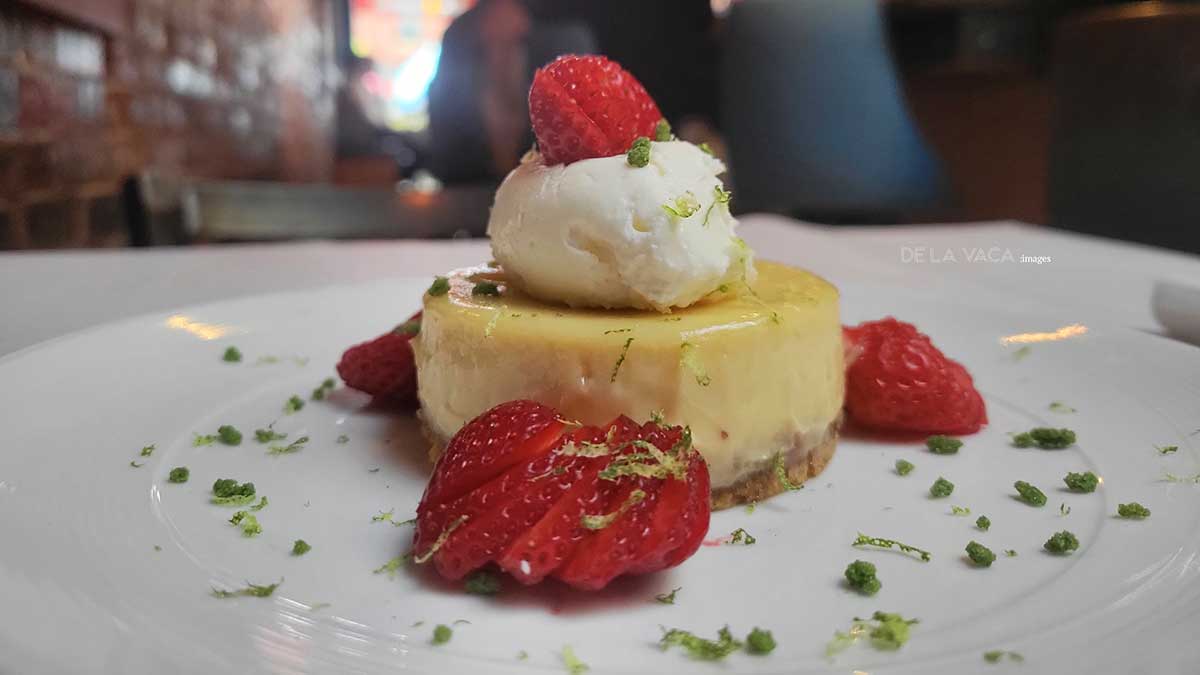 Put a key lime pie in front of this former Florida girl and you may not get it back. The zesty tang takes me far south, across Three-Mile Bridge, to the most recently seceded land in the United States: the Conch Republic. Eggs, condensed milk, sugar, and of course key limes, was once a staple of fishermen on long trips. The first creation, often attributed to a woman named Aunt Sally, recorded the recipe decades later. Jax’s take on the staple dessert of the southernmost part of the United States is decadent. Perfect graham crust with some of the richest key lime filling I’ve had, molded to a perfect circle. The addition of mascarpone certainly enriches the already tangy richness in the most indulgent way. Topped with in-house fresh-made whipped cream and peppered with fresh strawberries, Aunt Sally herself would be proud of this perfectly executed pie. 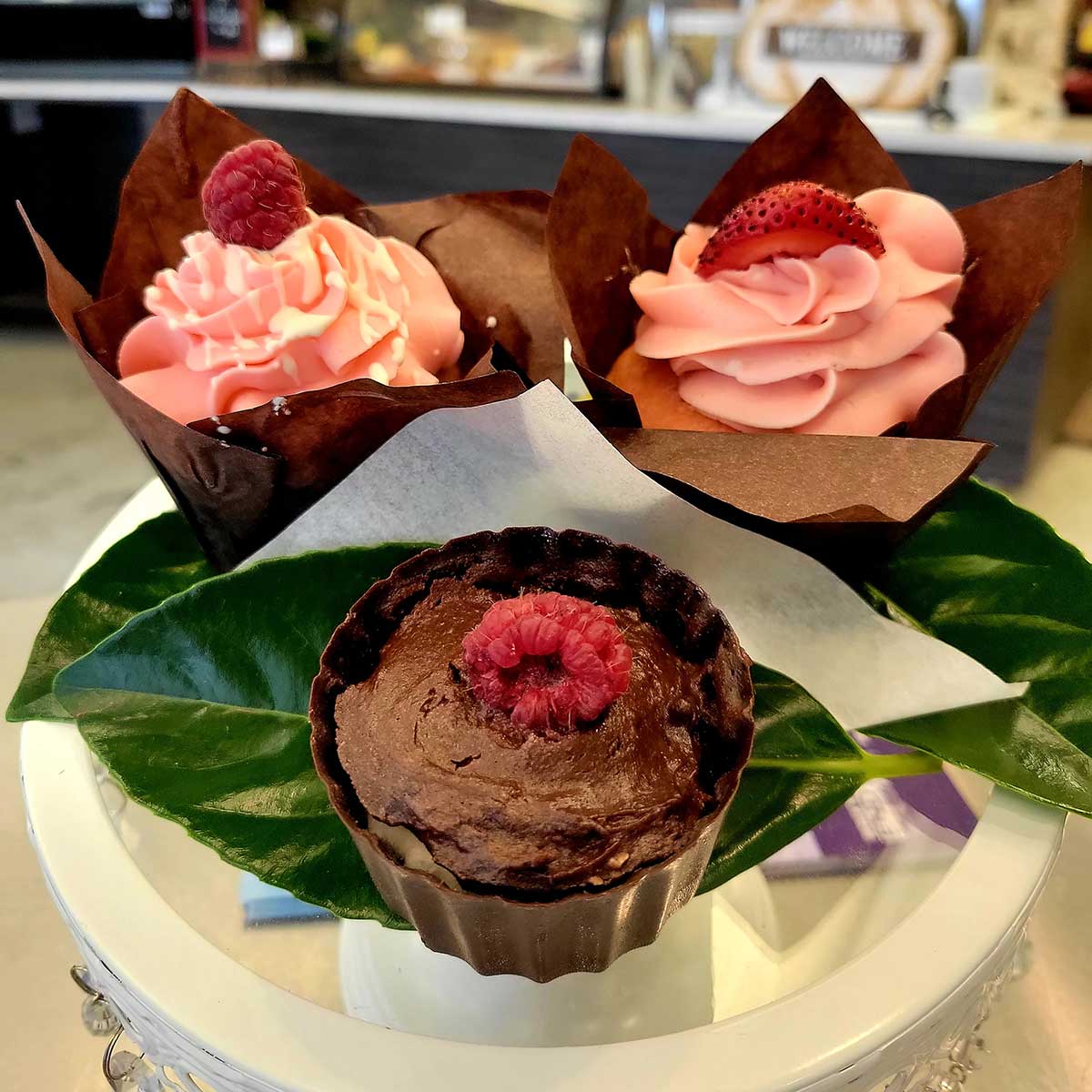 White chocolate raspberry is the best seller from Cherry on Top bakery in Thornton, featuring a creamy white chocolate center with a fresh raspberry crowning this singular achievement. Eaten in the car on the way out, we realized we really couldn’t drive until it was finished. Too good and too creamy. The raspberry chocolate mousse is “to DIE FOR” and the rich dark chocolate contrasts with the sweet fruity raspberry in this absolutely complete dessert. Even the cup that the cake comes in is edible dark chocolate. Yes, we ate that, too and OMG. Cherry on Top has been in business for three years and into a store front, featuring self-taught pastry creations. So pop in!

Starters, appetizers, apps – whatever you call them – these are the warm up dishes we come to expect while waiting on our main course. At many places the appetizer list reads like some ancient liturgy, a sacred monument to the early 90s: potato skins, wings, and, if you’re lucky, some form of green chili. Few places ask whether or not items like jalapeño poppers or blooming onions provide any inspiration about dining, food, and ordering more luxe items. Luckily we are blessed in Boulder County to have not just some real innovators, but also some classic executions that will inspire you to eat. The following examples of what an appetizer can be will really leave you wondering if a main course is even necessary. 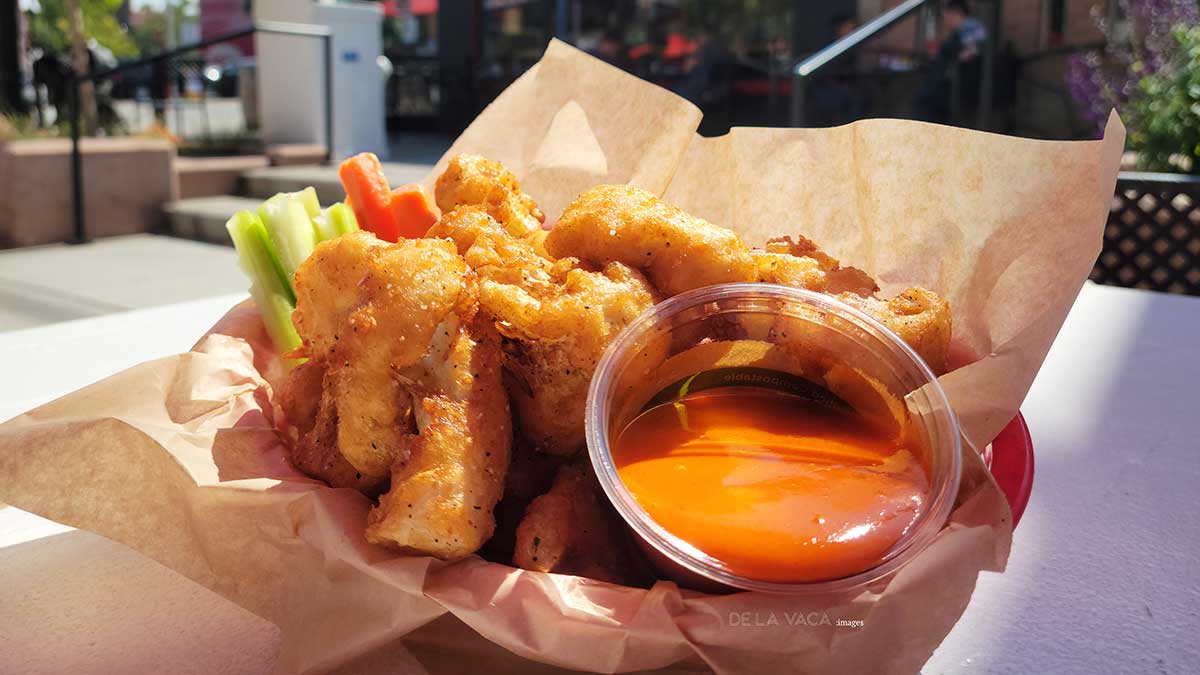 When you think of appetizers, cauliflower is not what comes to mind. We substitute cauliflower for a lot of things these days: pizza crusts, mashed potatoes, and other keto and paleo foods. The Sink, however, has developed what could be the pinnacle of cauliflower cuisine with Buffalo Cauliflower wings (until someone makes cauliflower bacon of course). Beating the wing shortage back, these bite-sized tempura-battered deep-fried delights will leave you wanting more. They were nice enough to point out that they truly need to be eaten on premises to get the proper experience. I can imagine the remaining moisture in the cauliflower would turn it soft, losing some of those important textures that make them special. Good news: we finished them on-site. 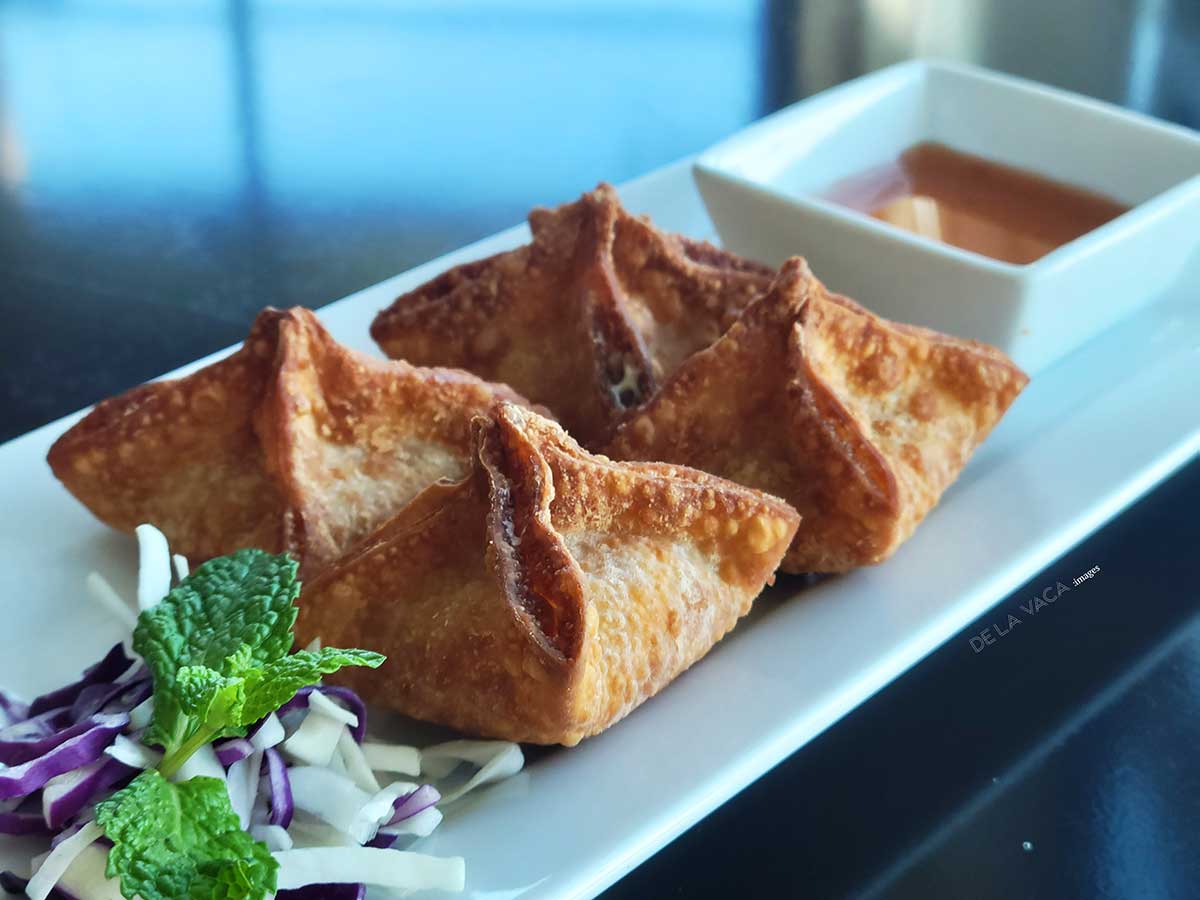 These may arguably be one of the best appetizers known to man. A favorite everywhere, from fine dining to those special holes in the wall take out kings and queens. While many figure that Crab Rangoon was created by Trader Vic’s owner in the mid 50’s, another story is that the deep fried treat is supposed to be based on a Burmese recipe and named for the Burmese city of Rangoon (now Myanmar and Yangoon). Filled full of cream cheese, spices, onions, and crab meat, perfectly pocketed in wonton wrapper and deep fried, you get the perfect crispy corners and the delicate hot sweet and savory center. Basubas take on these golden fried dumplings can best be described as “plump”. While some renditions of the dish leave you wondering where the crab is, these bulbous fritters leave no doubt. Served with plum dipping sauce, this appetizer will leave you wondering if you can just order two. 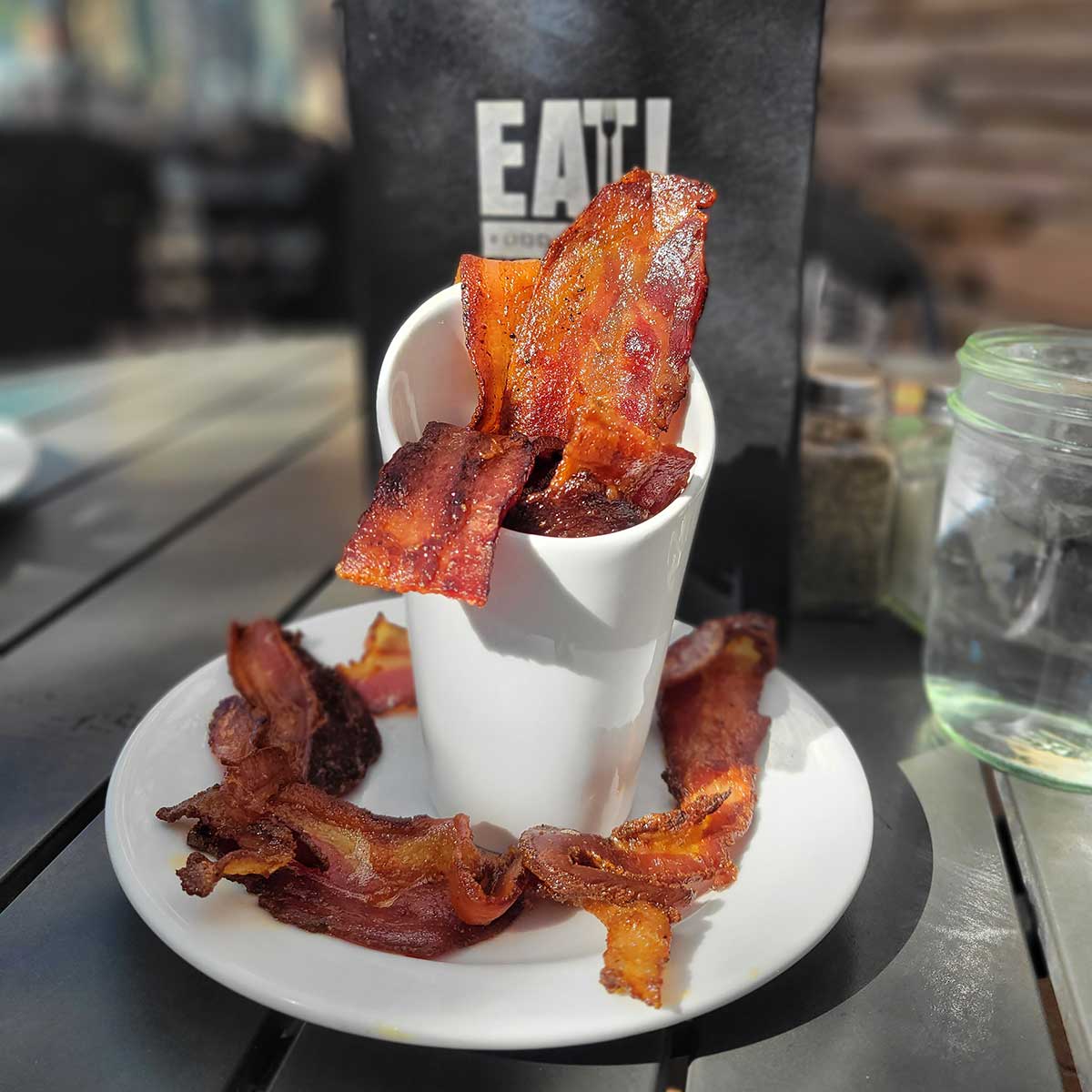 When I was told I had to write up a single ingredient appetizer my brain first goes to wings, no, maybe ribs? No! Ohhh, I know. Fries! While none of these even fit the single ingredient rule, the right answer is so brilliantly obvious. Bacon! Sure bacon can be found wrapped around many classic Americana appetizers, but is it possible to stand on its own? Abso Bacon Lutely! Eat! Food and Drinks knocks simplicity out of the park with this perfect balance of sweet and savory. Let’s check off the appetizer requirement boxes on this one; Salty, check. Fatty, check. Crispy check. Sweet, check. Savory check and mate. Salt and smoke cured pork bellies sliced and cooked to perfection and served in visible abundance should be topping the appetizer section everywhere from bar grills to posh Brunch hotspots. Truly an example of how you can never lose with bacon. 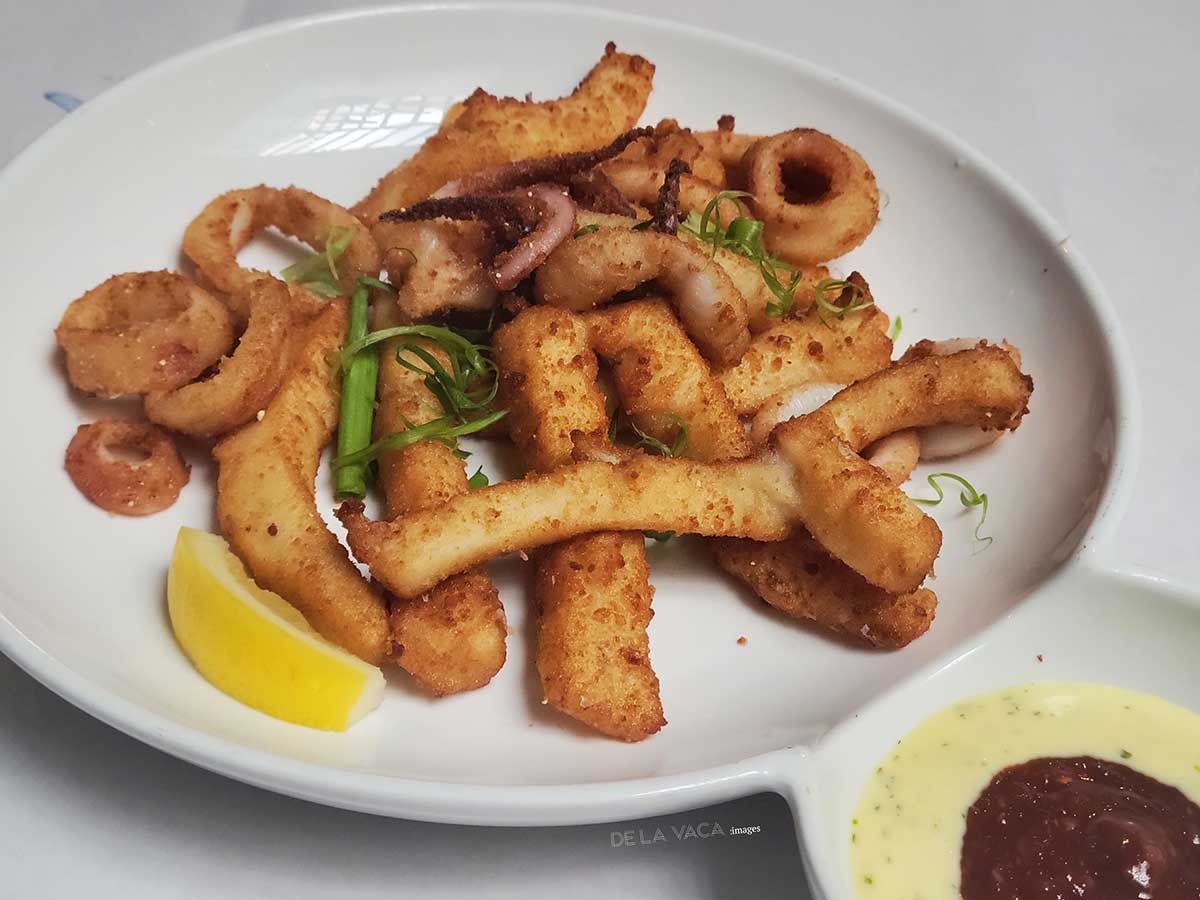 If you asked me what my favorite appetizer was I’d probably say, ‘ceviche!’ If you asked for my second favorite it would definitely be fried calamari. While a seemingly simple appetizer, fried calamari requires ridiculously precise cooking times, which is dependent on size and thickness and types of pieces of calamari. It’s an endless equation that would make the most seasoned food engineer gulp, and is one of the most remade dishes ever, which is why it’s my second favorite. It’s difficult to get it done right, even for people like me with tens of thousands of hours of cooking experience. Jax’s simple take and perfect execution has me reconsidering what my favorite truly is. Pretty much every piece. While I might not think about oysters enough, especially since not being anywhere near the coast, it was such a refreshing sight to see at a table in front of me. Served with horseradish, cocktail sauce, chili oil, and lemon. All this former Florida girl needed was some tobacco to finish off one of the greatest appetizers of all time, I love raw oysters. 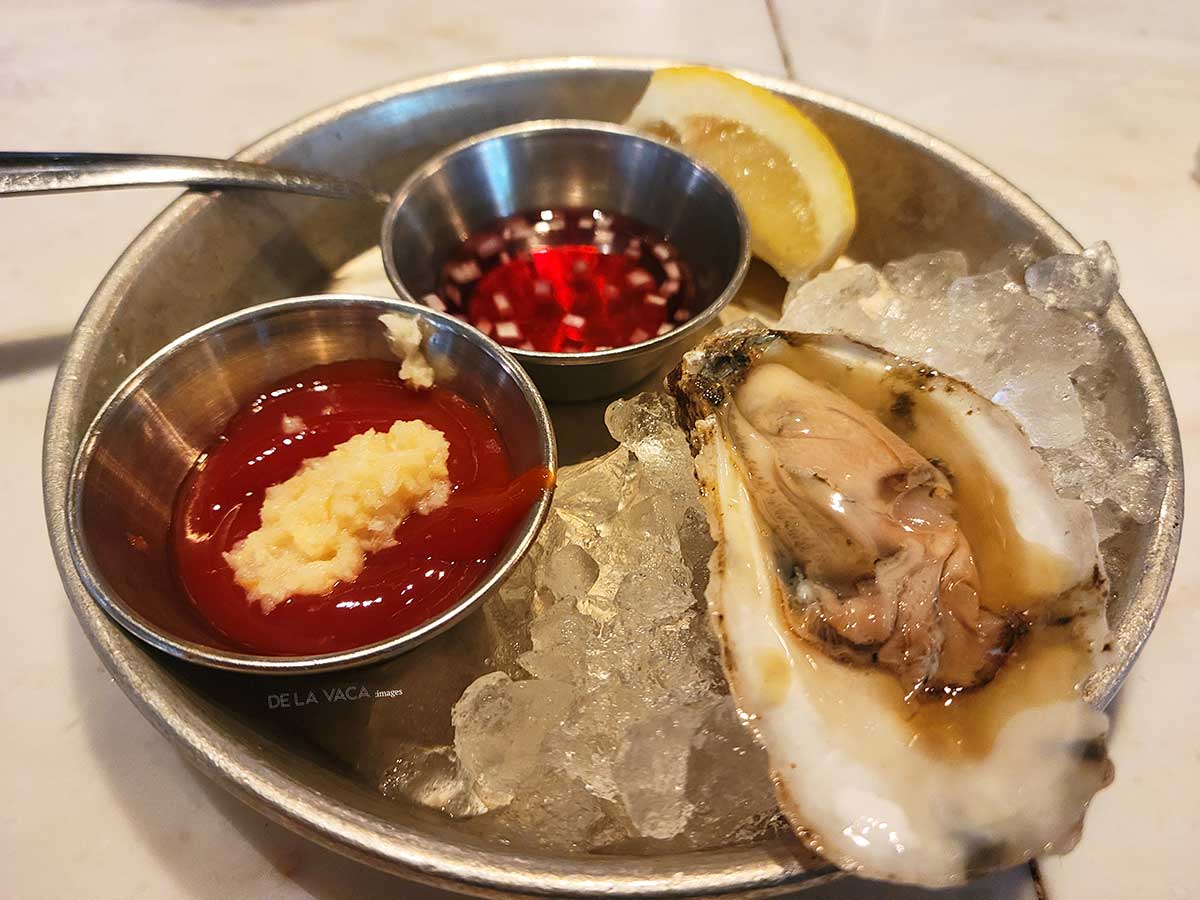 Absolute Favorites We Need to Remind You About

View all posts by Erin Reese →