It was about as star-studded as Broomfield gets. But maybe the North Metro city should get used to the glitz and fanfare. 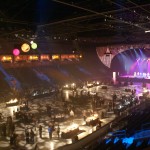 1stBANK Center...Live and in Color

The 1stBANK Center, formerly known as the Broomfield Event Center and The Odeum, opened its doors on March 3 to a crowd of journalists, music industry folks and the mover-and-shaker crowd. Bands played, speeches were given, s’mores were made, drinks were served.
It was more of a grand re-opening: The facility’s management was taken over by Peak entertainment, a partnership between AEG Live and Kroenke Sports, about six months ago; in the past, the BEC struggled to draw crowds and performers.

The venue has now been given a serious rock-and-roll makeover. An art-deco treatment—with a new coat of ruby paint, stylized windows and redesigned signage—flow throughout; pieces of art hang where beige walls once stood bare. Giant glowing globes float from the ceiling and a large screen now frames the stage, decorated with feathers or stars or whatever else a performer requests.

The overall transformation has one thing at its roots: taking an arena and making it into a music venue. From first impressions, it seems as though the facility’s new management is on the right track.