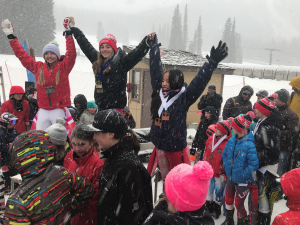 We love stories about girl power. About the cool stuff chicks in Colorado are doing. About ladies who tear it up in the mountains every weekend. Who bring intensity like no one else. Specifically, we love this story about one particular Coloradan girl who has trained her way to skiing glory, all before graduating from the fifth grade.

We caught up with Lucy Oliviero high in the  Colorado mountains. Ok, fine, it was a coffee shop in Boulder, but let us pretend, ok? The mountains are where she’s been training for the past two years as part of the U-12 ski team with the Eldora Mountain Ski & Snowboard Club (EMSC). Lucy was three years old when she first strapped on a pair of skis, but now she’s reached impressive heights in her still very young career as an athlete by becoming the overall Rocky Mountain Division champion in her age group. Lucy’s success was a culmination of three impressive wins and a fourth place finish throughout the season in races at Winter Park, Loveland, Cooper and Eldora, and an exciting (and huge) win at championships.

EMSC has recently become the best program in the Rocky Mountain Division, and has won the overall junior girls championship two years in a row, thanks to Lucy and her teammates. That’s a huge deal, especially coming out of a non-traditional ski town and going up against academies from winter sport giants like Breckenridge and Vail. “We’re competing with programs that have athletes on the hills five to six days a week,” explained Eric Vogel, the junior race director. The EMSC junior programs run either one or two days over the weekend, so their success is actually pretty unprecedented since extra time on the slopes matters. 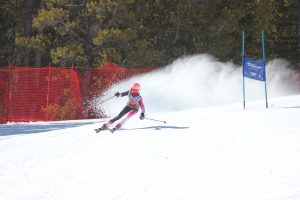 That’s why we find it especially impressive that Lucy’s first season of training was last winter. Her family moved here from Maryland, which Lucy admits doesn’t have great skiing (sorry, MD). They would come to Colorado for one week each year to ski, and according to Lucy’s mom, “that’s all she got until last year.”

Part of Lucy’s success can be attributed to training with her teammates, who are all strong competitors. “It’s cool to see them have that peer-to-peer competition,” said Eric. “That elevated all their skiing.” Lucy also complimented the supportive atmosphere the team has created. “I love my team,” she says. “This year was really amazing because everyone was there for each other, no matter what your level was.” Ski racing is not actually a team sport. As Eric explained, “It’s more about you versus the clock.”

Lucy doesn’t pay much attention to the clock when she races, though. Instead, she makes use of a tactic that many more mature athletes employ: visualization. When her race is nearing during a competition, she takes some time to picture her run and mentally prepare. “I close my eyes and I imagine myself going on the course and skiing it the best I can, and that usually takes a lot of the pressure off. I don’t even think when I’m on the course. I don’t even hear the cowbells or anyone. I’m just too focused.”

The age class is the next step up in competition, which Lucy will move to next year. When asked about competing in the Olympics at some point, she stated, “I think if I really wanted to, I could.” And she does want to – we checked. Keep an eye on Lucy in the future. She’s a girl on a mission and a force to be reckoned with. With every race, she’s showing us the amazing things girls can do. 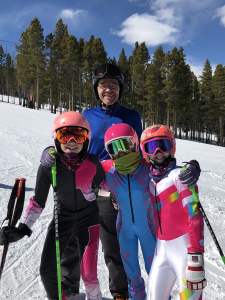