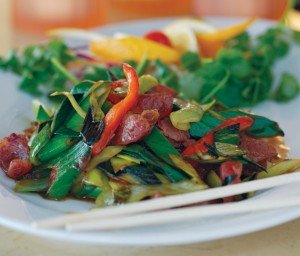 Owner David Fan told us Mok would have preferred to use Chinese leeks for their stronger flavor, but they aren’t in season; and chef Kiwai lamented that American leeks don’t have the same power or depth of flavor French leeks do. But those restrictions didn’t seem to deter either of them from producing quality results.

Fan invited a few of his best customers to be co-tasters and to help decide which dishes would make it onto the specials menu in honor of the challenge.

Chef Mok presented us with an array of dishes, including lamb chops stir-fried with leeks and a beautiful presentation of tempura-fried leeks stuffed with shrimp, chicken and scallops in garlic sauce. But the overwhelming favorite was his preparation of Chinese sausage and leeks. The depth of flavor in the Chinese sausage brought out stronger onion notes in the leeks while the slight sweetness of the sausage’s spices played off the inherent sweetness of the veggie. It was an excellent pairing of flavors in a relatively simple preparation that allowed the nature of the ingredients to shine.

Chef Kiwai wowed everyone with his tuna gazpacho—an innovative combination of Japanese and Italian flavors. Gorgeous slices of seared tuna dressed in garlic and tamari sauce sat atop a bed of basil over sushi rice prepared with garlic and black pepper. The entire sculptural creation was topped off with fried leek strings and a tomato leek sauce that really brought together the flavors of the Mediterranean with traditional sushi elements. This sort of unexpected fusion is a hallmark of Kiwai’s dishes and an area in which his talents truly shine. The slight char of the tuna accented the acidity of the tomatoes, while the fried leek strings gave the dish an intriguing textural element as well as a mild dose of sweetness for balance.

Overall, the consensus was clear: whichever dish you choose to sample, you won’t be disappointed.

Chinese sausage with leeks and tuna gazpacho will be available through April at Spice China, 269 McCaslin Blvd. in Louisville. Call 720.890.0999 or visit spicechina.com for information.