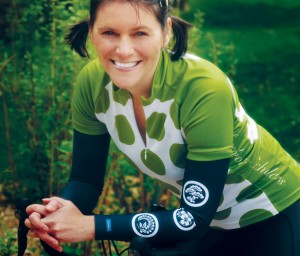 Teresa Robbins occasionally grabs a Snickers when she’s out riding. Sometimes, it’s a cup of coffee. Other times, she just wants to hang out with her friends or meditate with only her bike and the open road. Robbins’ philosophy on cycling—“I don’t want to race. I want to push myself, but I still want to have fun.”—has inspired the fast-growing women’s only bike ride known as the Venus de Miles. The ride started in 2008 with 661 riders; this Aug. 28, they expect more than 2,200 riders. There’s also a Venus de Miles Bike Club organized through Full Cycle. And Robbins said she hopes to eventually take Venus de Miles on the road as a national event series, starting with a Chicago ride in 2012.

“I see growth. There’s really nothing like this in the country,” Robbins said.

It was a circuitous path that led to the creation of Venus de Miles. It has something to do with the fact that, yes, Robbins saw a need for a fun yet challenging ride specifically for women. But it is also rooted in her want to raise funds for a group of students.

Robbins found her way into the role as director for VDM in 2007. She was working as an accountant for Greenhouse Partners, a Boulder-based marketing firm, and attended a symposium for Greenhouse Scholars, a nonprofit organization created by the firm that provides personal and financial support to high-performing, under-resourced college students from Colorado. At the symposium, Robbins was taken aback by the scholars.

“I was so bowled over by their passion and their enthusiasm,” she said. “What they have overcome is absolutely astounding. I wanted to make a difference.”

And then, it just seemed to happen. She didn’t know if they would even have 50 women at the first race. When almost 700 showed up, she says it was a dream come true.

“I wasn’t an event planner,” Robbins said. “I was an accountant. But I surrounded myself with a wonderful team of volunteers. We figured it out. And we are taking it very seriously.”

While the event includes men in drag, music, Trek demos, wings, burritos, chai and post-race cocktails, facials and massages, its foundation is in charity. Many of rides and races benefit some sort of nonprofit organization, but Robbins ensures that the focus is on the young scholars. They are at the ride, and they participate in the ride.

“We make sure it’s clear: The reason we are riding is for the Greenhouse Scholars,” Robbins said. “We also concentrate on the fact that we are empowering women and encouraging women to get outside. A lot of the women riding are being re-introduced to the sport or they haven’t been on a bike.

“It’s amazing to see the change you are creating in the scholars’ lives and in the lives of the riders.”

On progress: “The whole thing feels remarkable. Where I am most satisfied is getting to know the (Greenhouse) scholars. Their stories really resonate with me. I feel we are leaving a legacy.”

On the ride: “When you cross the finish line, it’s such an accomplishment. It’s so rewarding. That feeling of sisterhood is unparalleled. That’s what fuels me and gets me energized.”

On biking: “It’s my sanity. It’s meditation. It’s time with my girlfriends. It’s a bike. I have to satisfy that.”

“We can see every rider on the course,” she said. “If your husband wants to see how far along you are, he can easily find out.”

Don’t know how to ride?

“We can teach you! …It can be really intimidating in Boulder, but it doesn’t have to be. This ride is for women who want to get fitter and become better.”