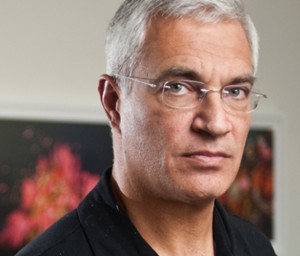 Louie Psihoyos’ first flick garnered an Oscar while bringing millions of people into an cove in Japan to watch dolphins as they are herded and slaughtered for their meat. It transformed viewers—at least for the movie’s length—into activists, and The Cove showed American audiences that their love of friendly Flipper had turned the animals into a commodity.

This time around, Psihoyos, who lives in Boulder and serves as the executive director of the local Oceanic Preservation Society, is once again looking to change people’s perception of their relationship with sealife (even if we are in a landlocked state). But instead of the violence and blood we found in the cove, Psihoyos will show us something emotional and lovely: Singing Planet.

What can you tell us about Singing Planet?

A: Well, it’s dealing with the songs of all animals. When we finished The Cove, I had taken two books with me to Sundance, and both of them, I didn’t know it, but both of them were talking about the mass extinction of species caused by mankind.

One…was talking about the five major extinctions that have happened on the planet; we’re going through the sixth one right now, called the anthropogenic extinction—the man-made extinction. The other book that I was reading was about the Great Barrier Reef, and it too was talking about how the beasts were disappearing and that this was a precursor to a mass-extinction event. And I thought, ‘That is the biggest story in the history of the world.’ I don’t care about the economy and whatever else humans have going on their lives—the idea that we could be losing half the species on the planet by the end of the century, I think, is the most important story out there, especially when it’s caused by one species: humanity. The question is how do you talk about this stuff to get people to care about it. I had the idea of talking about it through the loss of the song of these animals. Humpbacks, of course, are the most vocal animal, but it turns out that everything is singing. We just haven’t been listening. Music and song are parts of our primal brain. It’s natural for almost all species with a heartbeat to communicate to other species, to mate, to announce that they’re alive. Who knows why they sing, but we’re losing the voices of these animals. Right now we’re losing species faster than our ability to record that they’re even there.

How did your experience with The Cove influence your work on Singing Planet?

A: The Cove is the first film I’d worked on, and we did it right in my backyard. And I always thought I could be delusional when I was making the film, that I could make a film that anyone would want to see, and every day I would walk from my house to the backyard and I’d think, ‘My God, what am I doing?’ I could be wasting all my time and my friend’s money, my kid’s college account, my own retirement account. When we had the first screening at Sundance, we had some standing ovations. I realized that I wasn’t delusional, that you can transfer the emotion that you feel when you shoot and put together a film so that the audience is experiencing the same thing.

With The Cove, we only thought of the educational campaign after the movie was complete. We just had barely enough money to finish the movie, and then we had to attach this whole campaign at the end of it. Now we’re reverse engineering: Starting out with educational campaigning and getting the movement in place so that when the film comes out we’re in place to take advantage of what the film has created. There’s are different kinds of documentaries, but I’m interested in the social revolution that can be caused by new technology: films as weapons of mass construction. You know, you drop a bomb, you kill people. You create a film, you create allies. We want to create millions and millions of allies around the world with the new film. The film inspired thousands and thousands, billions of activist really, to help us on the subject, and I guess mainly thinking we could do the same thing. …Everything that we do, right now, we think what’s the end result we’re trying to create. What we want to do is save the voices of these creatures—the amazing songs that these animals have. We want to preserve them for future generations. It’s a whole different premise than making a movie where Hollywood’s just trying to put butts in seats. What we’re trying to do is change the minds of the people in those seats.

Are you considering Singing Planet an eco-thriller, like The Cove?

A: That’s exactly what I’m calling it, an eco-thriller. I love documentaries, but I think most people view them as sort of, you know, Brussels sprouts. Brussels sprouts are good for you, but this is not what you want when you go out for a meal. We’re trying to change that. We went to the Academy Awards last year, and George Clooney came up to me and said, “Great film. I love what you’re doing. You take a film like that and shine a light on it.” I told him we created our film after his Ocean’s 11, and he said, “The Cove was much better.” I asked him why, and he said, “Because it’s real.” So, a lot of people are looking at what we’re going to do next. It’s our Ocean’s 12 now.

The Cove was your first movie, and it did incredibly well. Do you have high hopes for Singing Planet?

A: I think when I go through the movie in my head, I think it’s going to have a bigger audience. We’re not going to have anything that horrifying in our film, but it will be emotional, thinking about species dying off. I can’t think of one thing more horrible. What you need to do when you’re making a documentary or you’re trying to move the needle on the issue, you have to get at the emotions of people. We did that very well with The Cove, and I think we’re going to do the same thing with Singing Planet in a different way. We’re going to do it through a very positive source, by exploring the music of these animals.