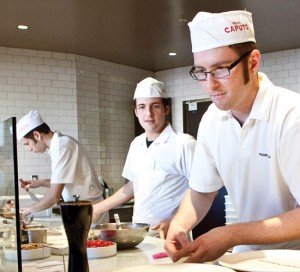 The farm-to-table concept of making a connection between farmers, food and consumers has finally, in recent years, become cherished—and people in Boulder County are taking food authenticity to a moralistic level.

When you step into Pizzeria Locale, the first thing you’ll notice is the massive 1,000-degree wood-burning oven forged together from pecan and oak wood and volcanic rock culled from Mt. Vesuvius—the only Ferrara oven in Colorado. While the folks at Locale understood the value of producing culturally authentic Italian food and incorporating tools and materials, including the Ferrara oven, the Transportation Security Administration didn’t. Stefano Ferrara originally sent over all of the materials to build the oven in Boulder, including brick, clay and dirt from the heart of Naples. But all TSA saw was raw organic material.

“They were like, ‘Why don’t you just use dirt from Boulder?’” said Chris Donato, general manager of Pizzeria Locale. “They didn’t understand that it was an authentic thing, that it was going to be more of an art piece.”

TSA destroyed those materials. What you’ll see when you walk into Locale is the second attempt, an oven made by Ferrara and shipped over, pre-made on the soil that is the home of what most agree is the best pizza in the world.

Traditional European food culture embodies the elements of simplicity and craftsmanship—a duo Americans haven’t, until recently, been accustomed to seeing served together. Only in the last several years have Americans started to value high-quality food (U.S. sales of organic food and beverages grew from $1 billion in 1990 to $26.7 billion in 2010) and make an effort to become knowledgeable about where their food comes from.

Chef Jordan Wallace of Locale spent four months in Italy working at pizzerias, studying the art of pizza-making in Naples before the restaurant opened in Boulder.

“We wanted to have the exact same thing that’s offered on the streets of Naples,” Donato said.

Everything from the V.D.F. prosciutto slicer (hand-crafted by father and son team Mirco and Gary Schnidero) to the arrival of the pizza to your table uncut—which annoys some diners—is a nod to authentic Napolitan style and tradition.

“The pizza isn’t pre-cut because there’s lot more moisture to it; our mozzerella is very fresh so it’s really watery, the San Marzano tomatoes have more water to them, and we store mushrooms in oil so they’re richer,” Donato said. “If we cut the pizza for you, the water seeps into the dough faster, compromising the integrity of the dough.”

Donato said Locale is not about kitsch, but rather, holding true to tradition.

“People have been doing things this way for hundreds of years,” Donato said. “If you do things one way for that long, you end up producing something beautiful.”

After spending two years in Girona, Spain, fiancées Coral Ferguson and Will Frischkorn opened Cured, a cheese shop, in downtown Boulder. But they haven’t left their European ideals behind.

“European culture around food is so thoughtful. It’s not convenience-focused,” Ferguson said. “It takes more time out of their day, but it’s time they enjoy because so much of their life is focused around food.”

Cured has a small-market feel, with sections of the shop dedicated to local fruit and vegetables, cheese, bread, cured meats, wine and freshly made to-go items such as salads and sandwiches.

Frischkorn said he hopes to help people become more knowledgeable about their local food and farmers through the presentation of their products (read: samples abound!) and hosting weekly classes.

“We’ll bring in different purveyors, cheese makers and brewers, and teach people how farmer’s grow things, about the composition of the soil,” he said. “None of the cheese will be cut and wrapped in plastic. You’ll be able to try everything.”

“We have so many incredible restaurants here, but we want to teach people that if you have quality ingredients, you can create incredible meals anywhere,” Ferguson said. “It doesn’t take a massive amount of tools or skill.”

Sarah Amorese designed downtown Boulder’s Piece, Love & Chocolate like a European boutique based on her travels.

“There’s a chocolate shop on every block in parts of France,” Amorese said. “It’s just the way they treat food: everything is smaller, there’s more attention to detail and craft, and there’s such respect for the purveyors and the ingredients.”

“I was in the Camargue [region] where fleur de sel comes from, and there was this huge festival of rice going on. Just rice. There was even a rice princess,” she said.

The shop’s open-glass chocolate case, based on that of a shop in Beaune, France, displays the truffles like jewels.

“We designed it so there would be more conversation,” Amorese said.

This sense of personal connection combined with experience of European culture provides the backbone for well-traveled locals trying to maintain the authentic experience.

“Our whole shop will be filled with products that speak to us,” Frischkorn said.

And if you don’t see the oven first in Locale, you’ll definitely see Jesus. Floating prominently above the bar and hand-carved in 1905, the piece was an opening gift representative of the religious and cultural tradition in southern Italy.

“If you walk into a pizzeria, there should be some Jesus,” Donato said.

Amy Segreti is a journalist and editor living in Boulder. She strives to live purposefully with regard to place, pleasure and palate. Especially palate.