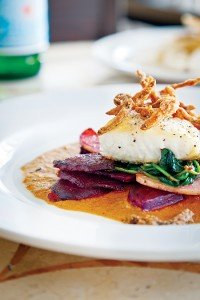 When a time mishap put 503 International Cafe on its toes, general manager Ado Salguero didn’t miss a beat—he snatched a little flavor from his Salvadoran roots and used pumpkin seeds as readily as salt.

That is a challenge,” he’d told me the day before when I gave him pumpkin seeds and a day to make me a dish with them. Sure. He also refuses to call himself a chef. Great non-chef, terrible liar.

So while his spiced jicama with lemon and an earthy ground pumpkin seed topping alternately surprised, burned and snuck a little sweetness over the tongue, he whipped up a pan-seared halibut and a mellow pumpkin seed spin off of a traditionally almond-based romesco that soothed the burning beast his appetizer created. “I didn’t want to make anything too generic,” he said.

His menu isn’t Salvadoran, but it hides none of its love for the country’s cuisine, nor did his dishes—the jicama dish is pretty traditional Salvadoran. However, where papusas, cassava and the like might be processed, souped, fried or pickled, Salguero’s intimate relationship with international cuisine shone through in the consistencies of each element: from the crisp jicama to pan-searing on the halibut to the white fish’s bed of thinly sliced fingerling potatoes, little chunks of earthy, never gelatinous, beets and pliant spinach.

His platings are simple, never presumptuous or scanty, and his time spent serving in the restaurant industry showed especially in his love of describing each bite as it came off of the plate. His cooking lessons started during childhood with his family, he said, but 12 years serving polished his palate…and his plans for 503.

“We’re trying to bring a higher level of food (to Lafayette) without having to break the bank,” he said. “With the pumpkin seeds, there were a lot of generic things I could have done and we opted to do something much more catching to the eye, much more pleasant to the palate.”

“We’re trying to change the culture of Lafayette’s dining experience,” he said.

He divulged a few plans for international favorites that’ll grace the menu in coming months, traditional dishes hailing from Spain to Japan. Frankly, we can’t wait.