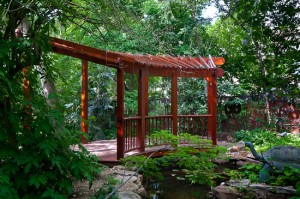 Fifteen years ago, there was no garden here.

It was—to be frank—something quite similar to a mudslide. The big backyard set a primeval tone, with overgrown foliage and large, dying trees. When the current owner purchased the home and half acre in Boulder, the first thing she wanted to do was terrace the yard, much like the beautiful terraces she had seen in South America. There was a swimming pool but no fencing. The soil needed major rehabilitation. So the yard was fenced, the dead trees were cleared away and there was an intensive soil-amendment effort. Simultaneously, a large, sweeping staircase was built, taking visitors down into the heart of the garden. Rhododendron, peonies and other perennials as well as small trees were planted. Later, the decorative fencing and the serpentine wall were added. The water feature was built, as was the pergola at the western edge of the garden.

Today, the breathtaking garden feels wild and tropical with sculptures hiding in the dense foliage and a fence that tells the story of a princess in search of a wizard and a prince in search of the princess. The water feature flows naturally from the top of the garden to the bottom, finding its way over waterfalls and into koi ponds.

“I grew up in the Midwest,” said the homeowner, who wished for her and her garden to remain anonymous. “I didn’t have the sound of water. And I just knew it was very soothing. It’s a very personal thing.”

The whole garden feels magical and faraway. That was the initial intent: to create a space of peacefulness and serenity and a place that is “out of time.”  But as much as the garden seems enchanted and effortless, it’s a whole lot of work. During spring and fall, they spend 40 hours a month maintaining it.

“It takes a lot of maintenance,” the homeowner said. “It looks wild and free, but everything is taken care of monthly and seasonally. …To create the canopy effect, there is trimming. There is fertilizing and lots of work to keep the soil up to par.”

It has also taken time and a little imagination.

“Quite, simply,” she said, “without applying magic to it, you’ve got to have a vision.”