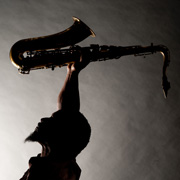 Saxophonist Karl Denson may have gotten his break with Lenny Kravitz, but as far as Colorado’s concerned, he’s his own man. Fronting his own Tiny Universe as well as the Greyboy Allstars, Denson’s funk-flavored jam is a much-beloved dance flavor in Boulder. Denson’s popularity here is second only to his likeability, and the affable acid jazzbo shares his opinions on the local jam-band scene, avoiding music fatigue and jamming with James Brown’s trombonist/arranger Fred Wesley.

French Davis: Why do you think your music does so well here?

Karl Denson: We always say that Denver is the L.A. of the Jam Band Scene. I think the cool thing about Colorado is that it’s kind of where the scene happened, initially, and the fact that we’re kind of iconic for that scene now…is why we’ve stayed so popular in Colorado.

KD: Well, I think the Allstars have always had more of a band dynamic in terms of the writing and the leadership. Whereas Tiny Universe is really my idea and my thing and, you know, it really just kind of highlights what I like and what I think.

FD: It seems you’re on the road a lot. How do you keep exhaustion from setting in, both physically, and musically?

KD: Well, that’s a good one. If we can travel in a bus, it typically doesn’t take as great a toll on you. But musically, I think that we try to rehearse on a fairly regular basis, so that we’re creating new stuff, changing arrangements, things like that. That’s really how you do it. And you do it at sound check by going, “OK, let’s do some old stuff,” or, “I got a new tune, let’s learn it at sound check to see if we can actually finish it and play it tonight.” So, you just try and spice anything up in any way you can.

FD: How does adding Fred Wesley change things up when you’re on stage? Aside from making it trombonier, I mean.

FD: What and/or who inspires you when you look around at today’s musical landscape?

KD: There’s a lot out there. I mean, you just keep hearing stuff all the time. I’ve always loved what Marco Benevento does. Garage A Trois with Marco and Stanton and Skerik is pretty amazing. There’s a new band, The Alabama Shakes, that I just sat in with a few weeks ago, and they’re pretty amazing. I’ve been listening to a lot of them. You know, my kids listen to certain things and every once in a while, I’ll grab something from them and go, “Wow, that’s really good!” Like I got Regina Spektor from my daughter and I really
like her.

Julie Miller contributed to this story.