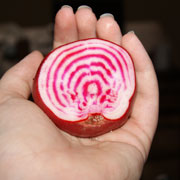 It’s one of the hottest topics in food: Genetically modified organisms are center stage with farmers suing ag corporations over the right to grow non-GMOs, watchdogs suing food corporations over the word “natural” on products with GMO ingredients, and protestors targeting Whole Foods’ GMO labeling.

Boulder drew national attention when officials with Boulder County’s Parks and Open Space agreed to allow genetically modified beet crops to be grown on public lands. But what’s the fuss all about? Are GMOs really the devil incarnate, as some food crusaders would have us believe?

A genetically modified organism’s genetic material has been altered through technology. This means combining DNA from different sources to create new DNA that produces a specific, desirable feature. Most often, that feature in crops is resistance to an herbicide, to make clearing away other weeds easier, or production of an internal pesticide.

Doesn’t sound like evil hocus pocus on the surface. In fact, farmers have done the low-tech version of this from time immemorial: crossing two different plants or animals in hopes of getting the best qualities of each. Think pluots (part plum, part apricot) or Labradoodles.

Some see GMOs as the natural continuation of this process; others believe we cannot possibly comprehend the full ramifications of engineering these organisms without the natural “fail safes” that are built in by the limitations of crossbreeding.

Although big ag companies claim GMO crops produce higher yields, studies have failed to back that up. In addition, GMO crops are often bred to resist highly toxic herbicides, which are then sprayed onto fields in high doses to kill off competing plants. This process only increases reliance on chemicals and contributes to pollution of the environment. Another big complaint is the addition of “terminator” or “traitor” genes that cause crops to yield sterile seeds—requiring farmers to buy new seeds from the seed producer every year, rather than gathering and saving a portion of the seed to replant.

There simply isn’t enough research to know whether GMO crops are a hazard to our health, but there is plenty of evidence to say that they are hazardous to our environment and our community, if only by proxy. The question, then, is not so much one of an outright ban—but one of education and of helping us as consumers make informed choices. Unfortunately, choosing non-GMO products isn’t as easy as going organic or even buying local. But the more often we go the extra mile to vote with our dollars and go non-GMO, the more likely a national standard will soon be set.

1. In the U.S., GMOs are in as much as 80 percent of conventional processed food.

2. Worldwide, use of toxic herbicides like Roundup has increased 15 times since GMOs were introduced.

4. Milk, meat, eggs, and honey are also at high-risk for containing GMOs because of contaminated feed.

5. The Non-GMO Project Verified seal is the only third-party verified label for non-GMO products.