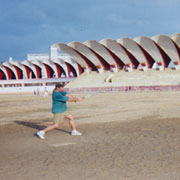 “No estampan mi passport, por favor.” A customs official, who couldn’t have been more than 25, slipped a piece of paper into my passport, pounded a blue ink dolphin stamp onto it, and my friend Johnny Rev and I were off for a week-long adventure in Cuba.

The whole week was stupid cheap, from the Spring Break round trip airfare from Denver to Cancun to the $30 a night (including breakfast and paid in U.S. currency, thank you) high-rise apartment accommodations, we were buzzing with excitement.

Both of us brought things to leave behind: Pencils, candy and gum for sure, but we each really wanted to play some baseball with the locals. That was our quest, and we were armed with gloves, hats, T-shirts and real Major League Baseballs.

It took us a couple of days of exploring out and around from our apartment on Avenida de los Presidentes to find it, the monolithic, abandoned, poured concrete edifice to sports: Parque Jose Marti Stadium.

The 10-block walk down to the ocean-front facility brought us to the dusty dirt expanse where dried weeds and bits of trash occupied the infield of what looked to be a soccer and track stadium.

Johnny and I brought our gloves and a ball in the hopes of playing catch. But the dirt field was already hosting a game among 14 or so college students. In my nearly forgotten college Spanish, I asked if we could play. At first there was hesitancy; these kids weren’t too keen on letting some old gringos who could barely speak the language horn in on their game. But when they saw the MLB ball—and realized they could replace the hard wad of masking tape they were using as a ball with the real McCoy—we were in. And being that there were two of us, it made it easy; I was on one team, and Johnny was on the other.

There’s something magical about throwing yourself at a random adventure. If you bring the correct gear and the right frame of mind, providence has no choice but to take your life to 11. Such was the case on that sunny March day 12 years ago.

Johnny took shortstop for his team and, as is his way, acquitted himself like an All Star. He made diving, Superman stops of sharply hit grounders. For my team, I roamed about in left center and chased down long, arching drives from the eager bats of kids who had never connected with a real baseball in their life.

Fielding is one thing, but in a pick-up game, it’s all about the offense. My team was thrilled that I scored three times on my four doubles in four at-bats. But Johnny capped a stellar defensive display with hitting for the cycle. We were heralded and cheered and our teammates chattered their excitement in machine gun bursts of Spanish.

We returned two days later for another game and were greeted like old friends. After the game, we left our gloves, balls (three), hats and T-shirts with our teammates, who shook with excitement about such gifts. I even traded my moderately worn Adidas tennis shoes for another guy’s cheap knock-offs of Converse All Stars that were held together with prodigious amounts of duct tape and twine laces.

I have no idea what the score was for either game we played, but I do know that Johnny and I were the undisputed winners.