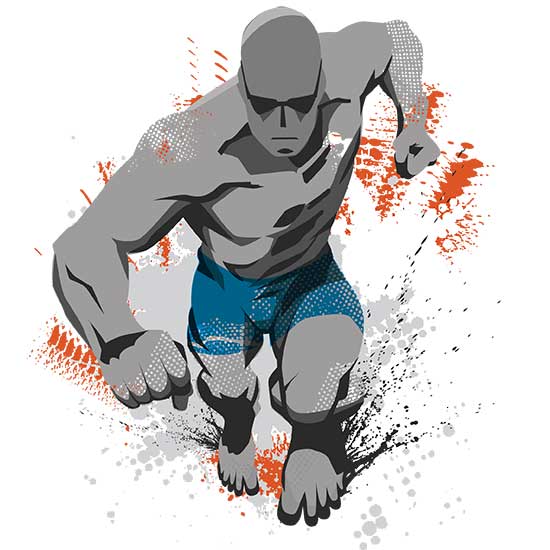 My high school track career came to an end on the second day of practice, with a well-timed but poorly acted sprawl across the roots of a tree. I didn’t have to fake the hobbling because both of my knees felt like shattered glass, a sensation that developed within minutes of what would be a two-mile “warm up” run around the perimeter of a local park. I was in agony. I hated running. But I didn’t want to just stop in the middle of Day Two and quit. I needed an excuse. So I faked a twisted ankle and begged off the team.

Fast forward two decades to the annual Turkey Trot in Fort Collins, a leisurely 5K circling downtown on Thanksgiving. It was my wife’s idea, a pathetic stab at physical fitness on a day that would involve nothing but sheer gluttony otherwise. The first quarter of the run went well, but then that grinding glass feeling came back. I hadn’t seriously attempted running since my ill-fated high school days and had forgotten the piercing pain it produced. By the end, I was barely walking, being passed by people out walking their dogs. I think I was the second-to-last person to cross the finish line, everyone but my wife gone by the time I finished. It took two weeks for the pain in my knees to subside.

Any normal person would chalk this up to a clear sign from the heavens that I am not meant to be a runner. My knees, perfectly strong and healthy in every other circumstance, weren’t built for running. If this were the caveman days, when survival depended on running down prey, I would have succumbed to Darwinism back in my teens.

Or would I have? There’s a fast-growing niche of running enthusiasts who’ve embraced a return to those Neanderthal days, before the invention of the multibillion-dollar running shoe industry, which is only a few decades old. Mankind has run barefoot since we appeared on this planet some 195,000 years ago, chasing antelopes and impalas (or at least their Pleistocene equivalents) until they tired enough for us to bash them with a rock. Nikes wouldn’t come on the scene until 1978, and with them came the marketing message that men and women can’t run without their scientifically designed footwear that altered the foot’s impact upon the ground. Today, heavily cushioned heels and space-age arch support purportedly make running easier and more comfortable.

While that might be true for many runners, scientists have shown that running shoes fundamentally change how our feet meet the earth—and that has consequences that might explain the pain I experienced in my knees. Shod runners hit the ground heel-first, which transfers the energy of a foot strike directly to the fibula and tibia, transferring as much as three times the runner’s weight directly to the bones and the knee joint. The shock is absorbed directly rather than transferred in a way that lessens the overall impact on one area of the body.

Running barefoot, on the other hand, encourages runners to hit the ground closer to the balls of their feet (or land full-footed), which allows the energy of the ground strike to dissipate through the natural hinge of the ankle and into the calf muscles, resulting in a more comfortable stride. As a result, the hypothesis is, barefoot runners can minimize the possibility of stress and impact injuries to the bones and joints. They also tend to run faster. Just ask any barefoot Kenyan who has won the Bolder Boulder.

Hmm, I thought, on first reading about this trend in the New York Times. I wonder if that would work for me. As much as I hated running because of my past experiences, I’ve always harbored a secret jealously of runners. Look at that red-faced wheezy bastard, I would think while driving past some skeleton in flapping shorts lunging into what might be his 20th or 30th mile, openly mocking his masochism, but privately envious of the fact that, because of his body’s natural release of endorphins, he’s sailing on a plane I’ll never experience.

So one day, after my normal workout at the gym, I approached a machine I’d long regarded with fear and loathing: the treadmill. I took off my shoes and dialed in a more-than-speed-walking-stride and began loping along. Immediately, I sensed a difference. Being barefoot forces you onto the balls of your feet, resulting in a gait that’s more like prancing than running. Ever vigilant for the first pangs of stabbing pain from my knees, I pranced somewhat apprehensively, drawing more than a few wondering glances from my neighbors, who were pounding along as if they were being chased by terrorists. I, on the other hand, looked like I was chasing butterflies. After 10 minutes, I had no pain and a nice buzz. So this is a runner’s high, I thought.

A few weeks later, I decided to up the ante. I bought a pair of Vibram Five Fingers, those oddball shoes that look like gloves for the feet, with individual pockets for your toes. I’ve derided these more than once, so it was a real leap of faith to put them on and leave the house. My plan, derived from an article in Runner’s World, was to ease into my life as a potential runner. It involved a series of run/walk intervals that gradually increase the length of time you’re running. The first week was one minute of running followed by one minute of walking, repeated 10 times.

I admit to some self-consciousness here. The gait is just too unusual to leap into with bravado. I looked like I was hop scotching around the neighborhood, like a guy prancing over hot coals. But within a few strides, I realized how natural it felt to run this way. The model of Vibram I wear has no cushioning or arch support at all. It’s just a skin for the feet to prevent injury from rocks and hot pavement.

But there was no denying that I was running. As I write this, I’m now into week four of the eight-week regime, which now involves three minutes of running to a minute of walking, repeated six times. It will eventually ratchet up to 10 minutes of running to one of walking, times five. The hardest part is the workout given to my calves, which now have the size and density of artillery shells. My feet, which although a bit sore, haven’t suffered from the lack of cushioning found in more typical running shoes. And best of all, I’ve not felt a murmur of complaint from my knees. Considering I’ve never run for so long in my life (not counting the Turkey Trot, which was more of a hobble than a run), this, to me, is a major accomplishment.

It’s gotten to the point where I’m no longer content to look out for foxes and rabbits in my neighborhood. I’m on the lookout for antelope.