I feel sorry for the squirrels living in the upper reaches of the towering cottonwood tree in my backyard. One of their favorite pastimes is staging raids on each others’ nests and then running down the massive trunk as one of their buddies, perhaps startled out of a midday snooze, gives a high-speed angry-squirrel-chatter pursuit. They make themselves dizzy chasing each other in spirals around the trunk until one of them has had enough and springs to the cedar fence to make tracks for another tree and another raid. 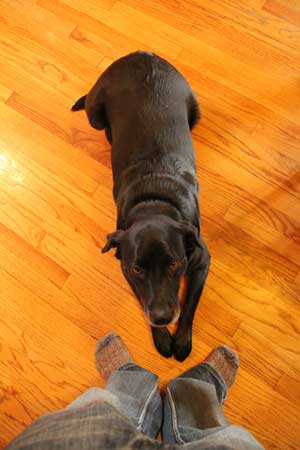 But she’s far from perfect. Ellie seems genetically incapable of not giving chase to animals that run. Squirrels, rabbits, cats, mice, other dogs, you name it…if it’s quick and furtive, Ellie is on it like she’s possessed. Or at least she tries to be on it. More often, she ends up clothes-lined by the leash and whoever is walking her ends up with a sore shoulder.

She’s great in a dog park where she’s free to approach other dogs, assert her alpha-female status, and then go about sniffing as if she were the only four-legged creature there. But while on a leash, every dog we pass is like some long-lost enemy who must be pounced on and made to pay.

And then there’s the doorbell. Ellie goes completely haywire at the sound, like one of those creatures in I Am Legend. The only benefit is that random solicitors rarely make the mistake of ringing our bell twice when they hear the frantic growling, barking, gnashing and clawing on the other side, the stuff of nightmares.

All of these various trouble points came to a head (minus the doorbell) in the training room of the Petsmart, where we were enrolled in obedience school. Ellie was among six or seven other dogs, most of whom were nonplussed at the presence of other canines. Our dog, however, was behaving like a wild boar brought straight from the jungles of some remote island filled with flesh-eaters where the ethos was kill or be killed. I grappled with the leash like I’d just lassoed a spooked horse. It was beyond absurd for me to be struggling with this apparently out-for-blood beast—who typically is the sweetest and most docile creature when she’s not in the presence of other animals—while pretending to listen to the trainer, who choose to ignore the spectacle.

But once it became clear that Ellie would knock herself into unconsciousness before giving up the fight, the trainer grabbed a squirt bottle and shot a quick stream of water at her butt. The effect was amazing—you could practically see Ellie thinking, “What the heck was that?” She was confused and distracted by this ghostly touch and thrown off her game enough that she actually calmed down.

Ellie improved greatly during the class, helped immensely by a new collar that circled her shoulders and some general all-around conditioning around other dogs. But I kept marveling at how the squirt bottle had immediately brought her under control. I was torn by it…did it constitute a punishment? Was it just a gentler way of giving her a smack, something I’d promised not to do? I asked the trainer about it.

“As long as you’re not shooting her in the face or causing her discomfort, it acts like a distraction, like a tap on the shoulder,” I remember her saying. “Sometimes, dogs need to be brought out of that tunnel vision they get and back to reality.”

Still, I was undecided about whether to try this approach. Opinion on the Internet (where I of course turned for more guidance) seems about evenly split between those who see it as cruel and those who see it as no big deal. It’s clear that how squirt guns are used makes a lot of difference here—screaming “bad dog!” while repeatedly soaking her in the face is mean and unnecessary, but a discrete spritz on the back, along with a reinforcing “uh-uh” (or whatever term you use to mean “no”) could serve as a gentle reminder that whatever she was about to do is off limits.

I bought a small water pistol and decided to see if I could use it to produce some behavior changes at home. The first experiment came when we invited a friend over, one who Ellie routinely pummels by jumping up on her…but with a single shot to the hind end just as she was about to launch, she became as docile as a mouse. You could tell she wanted to jump, but thought twice about it. All it took was once or twice more of this ghostly spray (I tried to make sure she didn’t see where it was coming from, so that it would be all the more mysterious, as if some doggy-god were tapping her from the heavens) and we broke her of the jumping habit.

To my great delight, I found the same was true of her tendency to lunge at other dogs during our twice-daily walks. Sure, I looked a little strange holding the leash in one hand and a water pistol in the other, trigger finger at the ready, but result was amazing. One of Ellie’s biggest nemeses is a huge great Dane whose owner seems to be on the same walking schedule. She can spot him a block away and starts straining at the leash; I’ve been on opposite sides of the street from these guys and been stuck holding back my snarling dog until they’ve turned the corner.

But on the first day of water pistol training, her tune changed completely—as soon as she spotted the great Dane and got into her “I dare you to come closer” posture, I shot her on the butt, totally short-circuiting her. “What is that?” she would have said if she could, looking all around for the source. Finding none, she turned back to growl and I sprayed her again. Now completely discombobulated, she resigned to just continue with the walk.

This is a miracle, I thought. The trick even worked on a rabbit—I sprayed her just before the rabbit bolted and, amazingly, Ellie stayed put.

Maybe the best thing about the water pistol is that I barely had to use it. Being sprayed out of nowhere is apparently so distracting that it makes an impression (see the tips below to be sure you’re being as effective as possible).

The one thing I didn’t bother trying to change was Ellie’s self-imposed vigilance against squirrels entering our back yard. A dog’s got to have some mission in life, after all, not to mention a venue for her natural instincts to take over.

As for the squirrels? Until they can figure out how to use their own water pistols, they’re just out of luck.