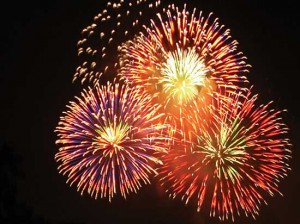 While there will be no shortage of options to enjoy the Fourth of July, one that really stands out is the festival atmosphere that’ll be lighting up Waneka Lake all day long and well into the night. Starting at 4 p.m., the small-town fair blossoms into an Independence Day extravaganza, featuring plenty of food and beer concessions, pony rides, bounce houses, face painting, balloon sculpting and live music from Chris Daniels and the Kings. Then, once the sun sets, one of the top fireworks displays this side of the Continental Divide. Grab the kids and the sunscreen and come on out. Check out lafayettecolorado.com.

Nothing says Fourth of July like a simmering rack of ribs, especially if that rack is replenished—over and over and over again. That’s going to be the case at Ribstock, a music and meat extravaganza held at The Rib House in Longmont from noon to 8 p.m. The event will feature performances by Nelson Rangell (noon-2 p.m.), Dotsero (2:30-5 p.m.) and Hazel Miller (5:30-8 p.m.). While the jazz will surely be hot, the all-you-can-eat BBQ (available in two seatings from either noon-4 p.m. or 4-8 p.m.) is bound to be sizzling. See www.theribhouse.com.

Speaking of festivals, the 5th Annual Boulder Festival of the Arts returns this year, bringing with it works across myriad media from some of the most talented artists in the region. Beginning at 10 a.m. on June 30, 29th Street transforms into one of the most eclectic and beautiful places in Colorado as it hosts this outdoor juried show, along with plenty of shopping and some of the best dining options Boulder has to offer. Check out bit.ly/boulderartfest for more information, or to download an application if you’re interested in participating as an artist.

Five fun facts about the Fourth from French:

The first official 4th of July celebration at the White House was in 1804.

The first 4th celebration west of the Mississippi was in 1805, thanks to Lewis and Clark.

Both Thomas Jefferson and John Adams died on July 4, 1826, 50 years after the Declaration of Independence was signed.

The 4th of July was only declared a national holiday in 1941.

The Declaration of Independence was actually submitted to the Continental Congress on July 2.