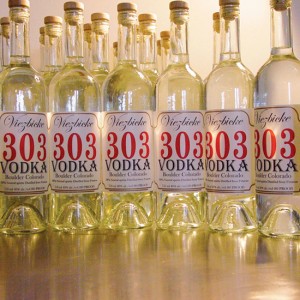 When growing a business from the ground up—where sweat equity and family labor is the norm—success depends on growth. And growth, in turn, is a result of demand for a consistently high-quality product, successful marketing and distribution as far and wide as possible. Like a three-legged stool, no two legs will keep a business from failing for very long.

Getting picked up by state (Elite) and national (Republic) distributors is huge for the distillers and drinkers alike.

“We’ve had to triple production to keep up with demand,” said Boulder Distillery owner and founder, Steve Viezbicke about his flagship 303 Vodka. “It’s been awesome for us. We’re now on a 24/7 schedule and we’ve had to hire two more people.”

Ted Palmer, president of Roundhouse, said the impact of getting picked up by Elite hasn’t been huge, but it’s freed up his time to attend to distilling and getting their new offering—an aged Anejo—through the regulatory hoops and

“Self-distribution is a full-time job,” Palmer said. “I could make more if I did it myself, but it’s a wash because of the time it saves you. I’m not a distributor, I’m a distiller. This way I can focus on doing what I’m good at: making gin and corretto liquor.”

Fans of these Boulder distillers also benefit because the products are easier to find in bars and liquor stores across the state.

“You’re finding liquor stores putting up Colorado sections because of all the craft distilleries that have opened,” said Rob Richardson, vice president of spirit sales for Republic about the 20 distilleries currently operating in

But as the numbers of craft distillers continues to grow, Richardson sees many parallels to the craft beer boom.

“Seven to 10 years ago, you saw craft breweries popping up all over the place,” he said. “Today they’re doing well and are starting to take market share away from the big boys like Bud and Coors. I think you’ll see the same thing happen with craft spirits. As people become more educated about what they’re drinking—and feel a loyalty to their local distiller—I think you’ll see much bigger (sales) numbers from the craft distillers.”

Does that mean that Absolute and Smirnoff need to start looking over their shoulders? Not quite yet. But like the robust growth seen in the craft beer market, just pulling 2-3 percent away from the big boys would be a huge victory.