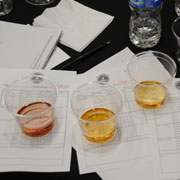 It was 9:30 a.m. on a sunny and unseasonably warm Saturday in February when I settled down in front of four unmarked plastic cups of vodka in a windowless room in the bowels of the Omni Interlocken Hotel in Broomfield. Hair of the dog? No. Day four of a mid-week bender? No.

I had company: a dirty dozen of sommeliers, bar managers, distributors and liquor geeks. We were putting our pallets to work as judges for the first Denver International Spirits Competition.

Modeled after the hugely successful San Francisco World Spirits Competition, now in its 12th year, the Denver competition garnered just less than 100 entrants (compared with 1,100 entrants from 61 countries for the San Fran event). But competition CEO and co-founder Christopher Davies says he’s happy with the numbers.

“It’s all about the marketing,” Davies said. “Accolades help a distiller’s product stand out.”

The judging includes more than 100 categories with several broken up into sub-categories by price. Such a system ensures that a Gordon’s bargain vodka doesn’t beat out a Crystal Skull vodka at five times the price. And while there were some categories—like absinthe—that had only one entry, that doesn’t ensure a medal.

Unlike the iconic Great American Beer Festival (which last year sold out in one week; tickets go on sale in June so keep an eye out at greatamericanbeerfestival.com for details), it’s unlikely that there will be a mass sampling of spirits for the public.

However, the top spirits winners will be announced and featured at a spirits and food event at the Omni Interlocken on March 17. Tickets are $60 for the Pairsine: Shaken not Stirred competition that will feature six chefs and six mixologists from acclaimed restaurants and bars in the metro area to put the award-winning spirits to work in food and cocktails. See denverspiritscomp.com for info.

Pucker up and drink

Avery Brewing’s third annual Sourfest is June 2 and tickets ($45) go on sale in early April. Check averybrewing.com for info. But don’t snooze; the Strong Ale Festival March 9 and 10 sold out in less than three days.

Sampling dozens of craft beers from around the country while jammin’ to stellar blues in one of the most awesome locales on the planet; it must be the Blues and Brews Festival, Sept. 14-16 in Telluride. The lineup has yet to be announced (check tellurideblues.com in late May), but with icons like the Flaming Lips, BB King, Willie Nelson and Umphrey’s McGee headlining in years past, it’s a sure bet that the music will again be stellar. So if you’re even thinking of going, get your tickets early.