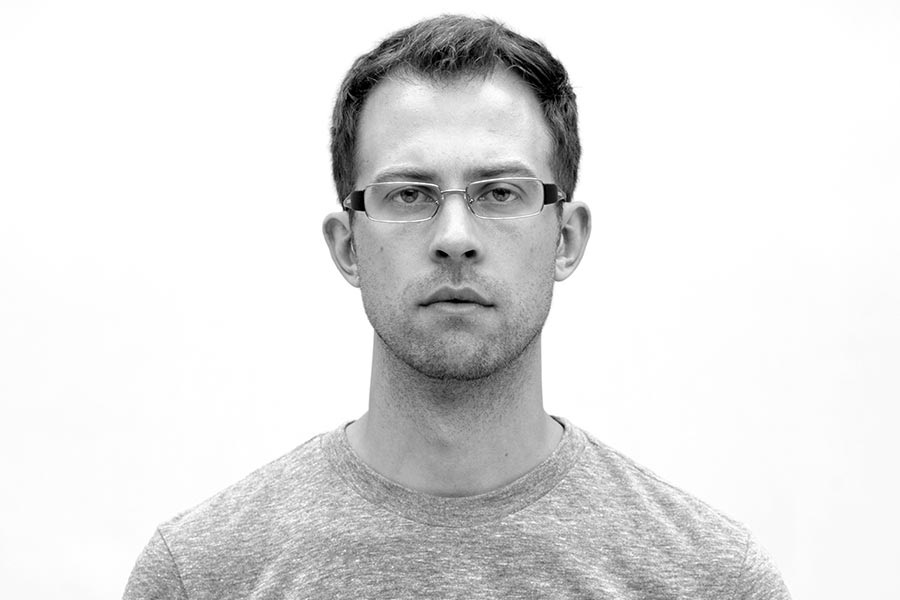 Local artist Conor King presents a series of portraits that he has been working on since 2011 at the Boulder Museum of Contemporary Art at Macky. Each photograph captures isolated close-ups of six individuals against plain backgrounds. We had a chat with King about what to expect with Conor King: Seeing, as I am.
L

Yellow Scene: Tell us about your upcoming exhibition at Macky Auditorium.

Conor King: The exhibition includes works from a series I’ve titled Portraits. I started that in 2011 and it came to a conclusion, or at least a really hard pause, in 2014. The work is in the form of traditional studio portraits. I drew from artists like Julia Margaret Cameron, to contemporary artists like Thomas Ruff. Following that tradition I’m asking people who I’m acquainted with, all creative people or people living creative lifestyles, to come to my studio and sit for these portraits. While I was shooting it was a very slow process for each portrait, and that’s intentional. The camera equipment that is used, all the images are shot on 4×5 film, is a view camera and because of the lighting situation at the studio the exposures are about a quarter of a second. Which sounds really fast but in photographic terms it’s actually a long time. The studio sessions also took a little while as well. I would shoot 10 images in about an hour and half or two, which allowed for some conversation and some down time allowing the sitter and myself to slow down and work at a pace that’s very different than Instagram and smart phones. I think the images show that a little more too. They kind of reveal themselves a little more slowly.

YS: What sparked this three-year project?

CK: I was interested in the challenge of shooting something that had been established in photography. I think it’s difficult to do something and bring a new voice to it. In photography there are many photographers who have shot portraits and so there was a challenge there. So that was the initial hook into the project for me creatively, and I had to come up with something that was my own. My very early photo work was a photo documentary project that was portraits of a family that I spent many years photographing. I was familiar with portraiture through the documentary, and I wanted to engage and participate in it at the studio level.

YS: Some of the series has been displayed before, what was the reception to the portraits?

CK: Right, two portraits were shown in 2011at VERTIGO Art Space. Since then I’ve shown four of the pieces at the Biennial of the Americas in summer of 2013. But I’ve never shown this many before. I think that overall they were received pretty well. People are always interested in portraiture because of the people sitting. There’s always a certain level of engagement because somebody is looking at somebody else. For those in the know as far as photography goes, well to the technical aspects, they are technically challenging to make because of the size and detail. There’s always photographers geeking out together when we look at work in regards to camera and equipment.

YS: Before Seeing, as I am, you’re last solo exhibition was in 2007, what’s going through your head after 8 years of doing collaborations?

CK: In 2007 I graduated from Pratt in Brooklyn, which culminated in show and then after that I spent some time in New York before picking up a three year residency at Redline in Denver where the portrait series started. So I was in the studio pretty regularly between 2007 and now, but I focused on experimenting and doing different projects. So the portraits project is most complete and has gained some interest locally. So when BMoCA invited me to do this thing it seemed like the perfect time because the series had come to a pause. It seemed like a good time to have a solo show, and display about a third of the series. It’s always nice to have a solo show because it is a chance to really dedicate some time and space to your idea and see it on the wall. It’s a nice kind of moment to pause and look at the series. I’m very excited.

YS: After your time in New York, what brought you back to Colorado?

CK: I never intended to live in New York for the rest of my life, so the door was open to move somewhere else. So knowing Denver and the Front Range, I really liked it here and it seemed like a good place to come back to, and it has been a great thing. With the Redline residency, and now with Tank Studios, I’m surrounded by 20 plus other artists that are really fantastic, and it’s been a really great place to work.

Join King at 5:30 p.m. tonight, January 15, at the Macky Auditorium Concert Hall, University of Colorado Boulder for the opening reception of Seeing, as I am.