The prototypical DIY-er in the music industry, Ani DiFranco launched her own Righteous Babe label back in 1990, thumbing her nose at a top-heavy music industry and blazing a trail legions followed. But make no mistake — that was a means to an end for her, which was about putting out her own music on her own terms. She’s quick to remind us that she’s artist, not a businesswoman, further evidenced by the fact she didn’t realize this year marks her 25th anniversary since she launched the label. Here, Ani talks about her reluctant business accolades, motherhood, and getting the entire Fox Theatre topless.T

Yellow Scene: This year marks the 25th Anniversary of the launch of your label. What are you doing to celebrate the occasion?

Ani DiFranco: Just plugging away. Just marching along to my destiny as usual. Gee, I didn’t really even know until you said it. But maybe me and Scott Fisher, my partner, will have to have a beer together.

YS: In many ways, you’re a proof-of-concept for musicians who don’t want to tie themselves to a label — and you did it long before the age of MP3s and file sharing. In some minds, that might even be as big a legacy as your music itself. How do you feel about that now?

AD: Well, you know, I guess that statement certainly makes me feel dubious. I’m very happy to have contributed on that level. I think the general or the greater public perceives me as a trailblazer in the realm of independence in music, and that’s super cool and I, of course, relish being an inspiration to others to find their own path in this world. But, I think the sort of media that focuses in on me “the entrepreneur” or the “independent business woman” there’s a grain of untruth to that, because what I am is a writer and a musician. And I think that the people who are more focused on the way I conducted my career are the people that aren’t listening to the music. The people that are listening to the music, that’s why they come back, not because I didn’t sign with a record company, you know? I think it’s the music and the connection that we make with each other through the music that is most important. 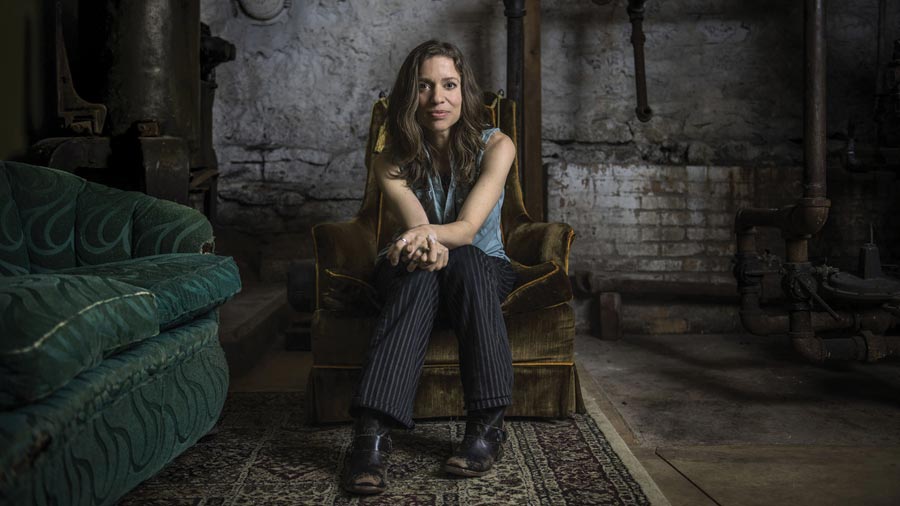 YS: How has the industry changed, in your opinion, since you started?

AD: Well, as it appears, radically. As we all sort of perceive. You know, people ask me all the time to comment on the state of the music ‘biz’ and the evolution of this, that and the other, and it’s funny because I don’t feel that I am the expert opinion. Getting back to what we were just talking about, I just feel like a poet and songwriter and a performer who got lucky, living out her political ideals. I ended up with a job that pays my bills by pursuing my art and my desire to make political change, you know? I sort of mutated that into a job, somehow. But I don’t have any savvy or special connection with or an ability to understand the music ‘biz’ or how to manipulate it.

YS: Aside from the natural maturation of a studied musician, how do you think you’ve evolved over the last 25 years? What makes the Ani today different than the Ani of 1990?

AD: Well, I mean, so many things are different. Between the 40-something-year-old me and the 20-something-year-old me. As a singer and a writer your instrument is always changing. I’ve always had this feeling like “wow, if I only played the flute or something I could just pick up my instrument every day and I would know what I was getting into.” But, when you’re singing from an evolving voice from an evolving soul, you have to evolve your art along with it or it stagnates. When I started singing, I had a lot of useful energy and drive. Yes, I’ve had anger, you’ve read all about that, about the sort of social injustices that I’d see all over the world, especial the ones that affect me on a daily basis. I had that incredibly useful but incredibly sort of egotistical sort of youthful outrage to fuel me. And now I don’t have that anymore. As you get older, so much of that perspective changes. Part of it can be a detriment, in that you get used to the outrageousness of the world and it’s hard to maintain a state of outrage. You have to move into some mode to just keep existing. But at the same time you gain a lot of humility as you endure on the planet.

YS: How has motherhood impacted you as an artist?

AD: It’s definitely brought a lot of peace and balance to my life. In the sense that it takes me away from my work and it makes me not completely immersed in my work. It forces me to get out of myself and focus on somebody else. There is a lot of sacrifice and a lot of giving in parenting and so that’s been very grounding and a really beautiful Zen exercise — “It’s not about you anymore Ani, sorry.”

YS: When you look back over your own canon, what are you most proud of so far?

AD: It depends on what aspect you’re talking about. I think I’ve made some good recordings, and I think I’ve made some bad recordings. I think I’ve made some good songs and some bad songs and everything in between and those aren’t necessarily the same. I’ve made great songs with terrible recordings and vice verse. I think that there were moments in my interfacing with the public and trying to respond to the questions asked where I communicated effectively and other times where I was lost. What can I say? I think that one of the good things about me and one of the things you can count on, is that I’ll just be open and true with the process. I hope that makes the art more interesting. I always know, in art, in my sensibility and what I’m interested in is when it’s not all polished and refined and perfected before it gets to you. You can see an artist succeed, you can see them fail, you can see them struggle, you can see them change and mutate, and with me it’s sort of all out there, so I’m hoping that’s a good thing.

YS: What do you wish you could change?

AD: So many things. You know, I used to be mired in that. I would walk off stage every night and I would lie away until dawn, thinking about all the things I said wrong and all the stupid mistakes I made. Thinking about how I failed, just that night, let alone making a record where you can fail forever. That’s a wonderful opportunity for regret. But at a certain point, in order to survive this life in the public eye I had to learn to step back from that sort of self-criticism mill and realize it was really hurting my health. Again that’ s where the kids help. Who cares if the rest of the world thinks you’re an asshole, what’s important is that your kid is happy and that you’re doing it right. That kind of thing.

YS: Talk about your relationship with Colorado. What do you enjoy about our home?

AD: Colorado has so much — the incredible, beautiful and inspiring landscape and the progressive culture and the trailblazing elements. And then also the flip-side of the political spectrum. Of course you know, and everybody there is so aware of the mash up of Colorado human culture. It’s a fascinating frontier on many levels. I have a very small crew these days, a very small and very dear family that I travel with, and one of the very important members is a Colorado and longtime Boulder resident, so ending the tour with a couple of nights in Boulder is going to be a real party. Party in Jay’s town. Jay Anderson is my front-of-house engineer and a wonderful soul, so I think of him as the like Mayor of Boulder. He’s the kind of guy that everyone knows and loves because you can’t not love him.

I love playing a couple of nights in a place and getting to get down and stretch out. This will be really fun, it’ll be the end of the tour and two nights. Probably 20 years ago, we filmed a show that we played at the Fox, it was just me and my drummer Andy Stochansky at the time, it was a really memorable night. I can’t remember why we were filming, probably it was just someone who was like, “hey we film music shows. Wanna give use $300 and we’ll film your show?”kind of a thing. Anyway as it happened, it was a super high-energy sort of day. There was a mosh pit of mostly young women up front, and they had these kind of security goons stationed at the front of the stage. And some of the chicks started taking their tops off because it was really hot, it got all hot and steamy in there. And the security guy went over and was telling the audience to put their shirts back on. I didn’t even know this was happening. I was just playing, doing my thing. And I can hear my drummer, Andy, plaintively in the background, on his mic saying, “Hey man, leave them alone man. These chicks are making my night right now,” so it became this thing, and I was like, “Okay power in numbers, everybody shirts off!” and that’s what happened. If you watch the footage, of course there are cameras around and chicks were like, “do I do this?” and many of them did. If you watch the footage from that night it was hilarious you see all these righteous babes out there topless, boobs swinging, dancing. And all these sensitive dudes trying to face forward, but their eyeballs swiveling around in their heads, thinking, “oh I so want to ogle all these tits right now but I’m trying to be cool,” so there’s a Colorado memory for you.