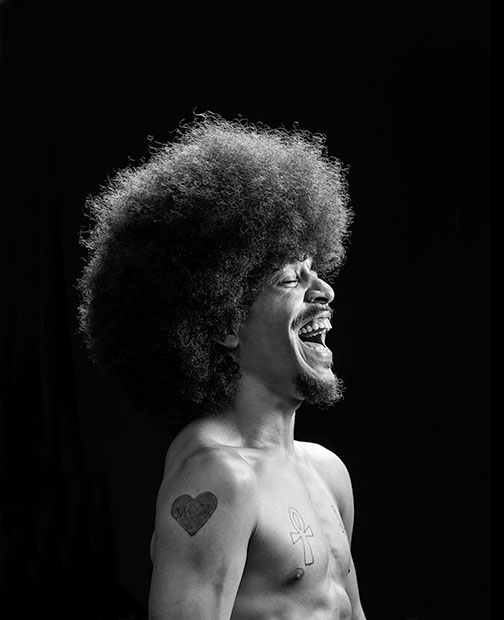 All photos by Paul Wedlake

A DiverCity conversation with Sammie Leon Lawrence, the Fourth of his Name, Holder of Custom-made Dragon-topped Walking Aids, Gardener of Souls, and Weilder of Badass Afros. Long may his humanity be known.

It’s easy to think about ourselves and each other in terms of base didactics: failures or accomplishments, wins or losses, wealth or poverty. It’s simple to separate our humanities out from who we are perceived to be. The idea is important to consider in a world that doesn’t see all bodies as able, all flesh as equal. The truth is, strip away everything else – the pretension and ego and image – and all we have left is our humanity, or lack thereof.

At base, we are all humanity. But even then, not all humanity is created equal. Have you met Sammie?

“My name is Sammie Leon Lawrence IV. I’m the fourth Sammie,” he says, “the first Native American and Black Sammie”.

When I asked who he was, he began by telling me that he was “born a blonde haired, blue eyed, white baby. That’s the first one we should start off with.” It’s ironic because today he’s known for his Blackness; a new icon of black strength and black vulnerability here in Boulder, Colorado. The same Boulder that’s been in the news, nearly non-stop of late, for police overreach or violence or aggression against community members.

He has had PTSD since age 6, recalling watching, “my mom get beaten by my dad. Not only that, I watched him get carried away… After he was arrested they put them in handcuffs and drove him away. I chased after the car and it started to rain. That is literally the memory that follow me for 13 years.” One of his PTSD triggers is violence against women, violence against humanity in general.

He’s a community activist. He says,“I support all people in my community. I am a gardener of the souls of people.” It’s an interesting metaphor, being a gardener, and one he comes back to throughout our conversation.

But the conversation bounces around. He pauses, in between nibbles of tako (octopus) sashimi and refills of black tea at HAPA on Pearl, then asks, “I believe you’re familiar with Spiderman? There’s a line in there called, ‘Sins of our fathers’. I’ve had plenty of times when I’ve been a villain in my own story, feeling lost or worried. I am who I am because I choose constantly not to be the villain. To be the hero of my story.” But heroes also make mistakes.

When asked about his mistakes, he says, “learning about my anger. Learning about my emotions and learning to be in control of my emotions fully. Being a man who didn’t grow up with my father, it’s a different aspect. I had to teach myself how to be a man.”

Being a man is hard when the world seems to keep throwing new issues at you. He tells me, when asked what he’s doing now, “I am healing my brain”. It’s a clear statement that may seem a little odd unless you know his history. Sammie has brain issues. They’re actually rather new. I have to wonder how that affected his work in dealing with his emotions of late.

“I ended up dealing with a brain injury last year that impacted my ability to work and basically function with everyday life. I got a brain injury from a workplace injury, from an unsafe work environment, in Boulder actually. As I was walking,” inside of a marijuana dispensary he was an assistant manager at, he says, “there’s a metal beam that starts falling down. There were multiple other beams behind it.” 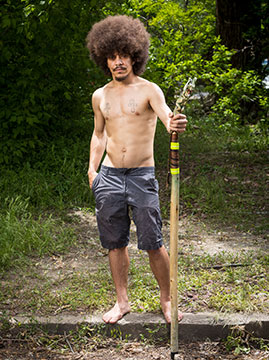 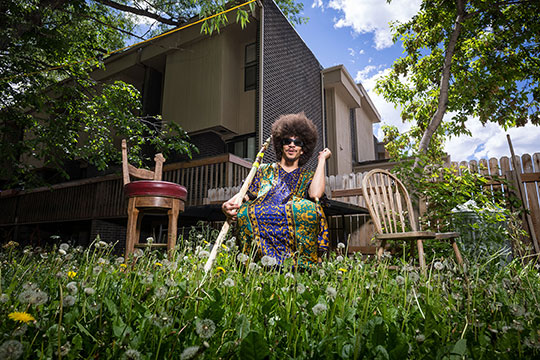 He was struck in the head and immediately knew something was wrong; slowness in movement, uncharacteristic for a man with ADHD, issues with walking, problems with thinking. As with all injuries, but especially with head injuries, immediate medical care is critical. Sammie wasn’t able to access health services for a few days, he tells me, while waiting for health care access information from his work. So much for humanity.

A couple of days later, he says, he was fired. He ended up having neck issues, spent time in physical therapy, and the issue with his work place became a worker’s compensation issue come over which he had to file a lawsuit. From the injury he developed non epileptic seizures, a form of brain damage and a condition I’ve personally witnessed manifest. He had a small seizure in the parking garage near the HAPA where we talked; construction crews were working and a machine making piercing beeping sounds triggered it.

It reminds me of Mexican students protesting under banners that read, “they tried to bury us, they didn’t know we were seeds”.

You may know him today for his recent, filmed interaction with the Boulder Police. We won’t spend a lot of time on this because there are plenty of news reports and videos out there for you to form your own opinion. In fact, every citizen has the right to film the police. And Sammie was there filming to keep unhoused people safe. From the perspective of an outside observer, it seems like as a formerly unhoused person himself, he understood the struggle and as an activist he understood solidarity; that’s why he was there. All part of his humanity.

His real passion is youth. “Eventually I’m going to be working back with Attention Homes. They are… a model example of how a shelter should run. They’re not a one-size-fits-all kind of place”, accepting and understanding the different goals and aspirations of people.

Which brings us back to his gardening. He tells us, as others have said before, “one of the reasons why I work with the youth the way I do, you get to see the fruits of your labors.”

On the humanity of Sammie Leon Lawrence IV: Sammie’s a gardener. Boulder is a garden. And we are all seeds.

When we are buried, unwillingly or in the wrong way, or in the wrong places, maybe while on a sidewalk eating a sandwich facing down oppression, may there always be a Sammie there to make sure we’re grounded, planted, and that our humanity is seen..