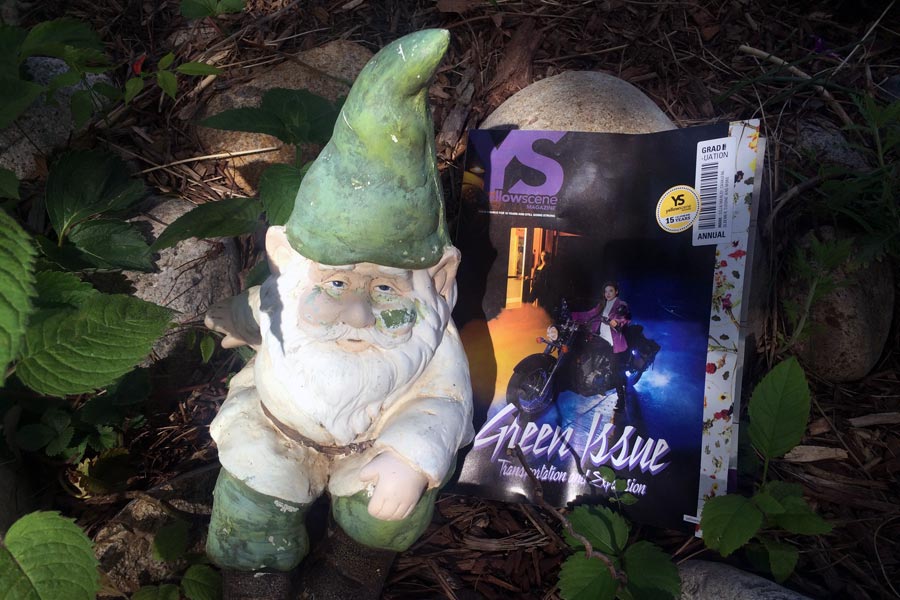 Gnomes: they seem like cutesy garden characters, but they can in fact keep us healthy. Through them this month, we try to find ways to incorporate exercise into our daily routine.G

Getting moving wasn’t always a problem. As kids, we walked to friends houses, ran to the crick, and spent afternoons climbing trees.

You got even more exercise if you were a rascal. In the course of any average summer day, the author ding dong’ed and ditched and toilet-papered houses. Running from adults and cops provided cardiovascular training and virtually guaranteed he would never attend a prestigious college.

It has been years since the author fled anything on foot (besides angry ex-girlfriends). Perhaps uncoincidentally, his belly protrudes far enough to nearly conceal his feet. But a recent news article changed that.

“Gnome liberation movement strikes Boulder,” read the February headline in the Daily Camera. It seems that someone stole Boulder resident David Smith’s gnome. “The location of the Smiths’ faithful lawn guard is currently ‘ungnome,’” wrote Sarah Kuta. “The bandit did not leave a ransom ‘gnome.’” This article was greeted with much attention and mirth.

Gnome-stealing is a world-wide prank. There is a whole silly movement, the “Gnome Liberation Front,” dedicated to freeing gnomes from “slavery.” The meme achieved prominence in the movie “Amelie,” Travelocity borrowed the meme for an advertising campaign, and there was a phone app, Gnonstop Gnomes, that promised “a gnome in your pocket,” which seems like it should be a crime in itself.

This led to questions: how much exercise could one get while “liberating” gnomes? Would one have to run from the owner? Would carrying a gnome mean extra calories burned?

On a recent Sunday in Boulder, the author dressed in his most athletic outfit — Nike Free sneaks, knit pants and dry-wick performance shirt — and walked north from the Pearl Street Mall. Immediately, at the intersection of 14th and Mapleton, he spotted a quarry. The little mythical ceramic creature was white and green, reclining on a bed of freshly-tilled soil. The author thought of stealing it and running, and thereby getting his exercise. But the gardener — and presumed gnome-owner — was milling around the garden with her brown dog, still gardening. The author is, at his heart, a giant flailing wuss. He wasn’t brave enough to “liberate” a gnome right under the nose of its owner.

So the author walked more than three miles through Boulder neighborhoods, looking for a gnome that would be easier and less risky to “liberate.” Boulderites have plenty of lawn ornaments, but they’re very Boulder-ish: smiling Buddhas, meditating Buddhas, serene Buddhas, meditating smiling serene frogs who look like Buddha. No gnomes.

So the author returned to 14th and Mapleton, to the only known gnome. The area had, if anything, grown busier. A hatted man electric-sawed wood. A curly-haired dude stepped out toward the garden. A silver Chevy Impala creeped close. A young couple with a stroller headed west.

But the author, though aging, is dedicated both to improving his fitness and to being stupid for the sake of being stupid. So, in full view of about six people, the author snatched the gnome and, cradling it like a baby, sprinted east on Mapleton. He was running as if he was being chased by a bear, or an ex-girlfriend, or the IRS. His tongue waggled, breeze-blown. Bystanders looked perplexed. The young couple in the stroller gingerly stepped off the sidewalk and watched and laughed.

Studies have shown that interval training is very effective — walking for 30 minutes and then sprinting for three might be more effective than walking for an hour. The problem for the author was that he cannot sprint for three minutes. After thirty seconds, his heartbeats per minute surpassed Einstein’s IQ, and his coronary felt like it was verging on thrombosis.

Then, things got oddly real. The silver Chevy Impala was driving alongside him, matching his pace. The four occupants craned their necks toward him, surveilling. Good citizens. Vigilant. They had seen him sprinting with the gnome, and were on the case. The author could not outrun an Impala, gnome or no gnome. He can’t really outrun a medium-sized poodle or an especially spry ferret.

Panicking, the author took evasive action. He pivoted and sprinted back the way he came. The Impala u-turned and followed. Quickly, the author ducked down 16th Street, and ditched the gnome in the garden of a small yellow house. The impala drove by, occupants glaring. The author walked slowly and literally whistled, international code for, “I’m going to pretend I was doing nothing wrong.”

The Impala must have called the authorities. A minute later, a Boulder Police cruiser arrived. (Possible 911 transcript: “Yes, police? We just saw a man bolting down Mapleton — he has large ears and a bad complexion but is handsome in a certain light. He appears to have purloined a garden decoration.”) In the presence of the cop car, the author aggressively feigned innocence. The cop, after passing him twice, receded.

Anyway. The author received quite a workout. His pedometer reports that he burned 381 calories and traveled 4.3 miles over the course of two hours. He ended up drenched in sweat; probably half from the running and half from the stress of facing legal sanction for ganking gnomes. He took a photo of the elfish creature with a Yellow Scene magazine, the way rebels do with desaparecidos in the Colombian jungles. Three days later, he went back to find the gnome and return it.

And, even though it was decent exercise and an interesting way to pass an afternoon, the author hereby apologizes for his juvenile behavior, distances himself from the Gnome Liberation Front, and discourages his readers from disturbing any troll, elf or gnome lawn decoration, even in jest, even in pursuit of exercise. Buddhas, however… are a totally different story.