Under A Blood Red Sky at Nissis 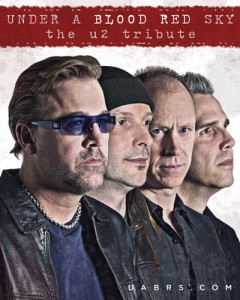 U2 tribute act Under A Blood Red Sky takes the stage at Nissis in Lafayette on June 4 at 7:30 om. (Tickets start at $15, book now at nissis.com). We took a few minutes to chat with drummer Jerry “Larry” Bousquet about playing for one of Colorado’s most popular tribute acts. Check them out online at www.uabrs.com

YS: What makes U2 so special for you?

JB: I got turned on to U2 in 1983 when the War album came out. I think I was 14, growing up in Southern California. I remember listening to it, thinking there was something really cool going on here. It sounded more like a concept album to me when I first heard it. I was drumming for my school’s concert and jazz band at that time, so when the drums started off with the first song Sunday Bloody Sunday, it really caught my attention. To follow with songs like Seconds, Two Hearts Beat As One , Surrender and 40. Well, I was hooked! Great song writing, amazing lyrics, and they looked the part singing those rebel songs. I’ve been a fan ever since.

YS: Why do you think UABRS resonates with audiences here in Colorado?

JB: We can probably thank one of the best venues in the world for that — our very own Red Rocks Amphitheater! There is no denying U2 has had quite the career and is still going strong, which almost hurts you as a tribute project. But when U2 spent every penny they had to shoot a live video/record in Morrison in less then perfect weather, it actually turned out to their advantage. We’ve always said Red Rocks is holy ground for U2 and there is still a huge fan base here because of this. When Billy “Bono” and I were in talks about starting this project in 2005, we knew it could be successful. It had to be authentic and bring the passion and energy of an actual U2 concert. With the wondrous talent musically and the help from our management, we think we have achieved this. It’s very gratifying when someone comes up to you after a show saying they were at U2’s show at Red Rocks in 1983 and they absolutely loved our show. Makes all the work worth it.

YS: What other projects do you guys have going?

JB: I myself drum and sing for a wedding/private event variety band called Mannequin (www.mannequintheband.com). They’re all very talented musicians and lots of fun. We’re on our way to Hong Kong next week to perform a couple shows.

Jeff LaQuatra, our “Edge” is a classical guitarist and is incredible (www.jefflaquatra.com). He also has an awesome project called Mr. Majestik’s 8 Track Revival (www.mm8tr.com.) It’s one of my favorite bands in Denver right now.