Faces of Summer: Swapping Genders at the Colorado Shakespeare Festival 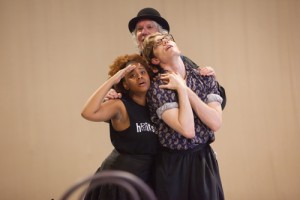 Are women funny? Geoff Kent thinks so. “I am married to a hilarious woman. I’m firmly aware of how funny women are,” he says. As director for the Colorado Shakespeare Festival’s A Comedy of Errors, Kent has had the opportunity to explore women in comedy, specifically in Shakespearean comedy.

Since 1958 The Colorado Shakespeare Festival (CSF) has been taking over Boulder for a few months every summer, offering up four works by the Bard (and one other show, usually inspired by his works.) This time round the Festival offers a unique production of A Comedy of Errors with the genders swapped and the setting transported to jazzy 1930’s Paris. “This hilarious new production bends the classic adventure of mistaken identities in a different direction that puts the women in charge… and the men in their places” explains the festival website, and this new production is sure to put a smile on your face.

“Every year when we audition the Shakespeare Festival we always have a wealth of female talent that we turn away because it’s a male dominated structure that is difficult to crack,” Kent explains of the decision to swap genders in A Comedy of Errors. “We are certainly not the first to do it either… there is a company in California that does all their shows 50 percent women.” There was even a totally gender-swapped version of The Taming of the Shrew in Denver this past January by Lost and Found Productions. For this Festival A Comedy of Errors proves that the fluidity of gender and the ability to think creatively can prove to be a very powerful tactic when approaching Shakespeare. “Women don’t get to do Shakespeare as often as they should, so that is really why we did it and it’s working great. We’ve adjusted the language to support it so all the he’s become she’s… but we haven’t re-written any text other than gender pronouns.”

Now, the women get a chance to shine as the story of the two identical twins separated at birth get new, vivid life on the Mary Rippon Outdoor Theatre. And these hilarious women are now getting the chance to play the Shakespearean clowns they normally wouldn’t ever get the chance to play. “There are basically three ways to swap genders in Shakespeare. First, you can have the women play men — which has been done very successfully. Second, you can have the women play men without changing the text at all, just trusting that the audience will get it. Or third, you can mess with the gender lines.”  And the audience gets the treat of seeing women take charge in a totally hilarious way. “I love doing comedy and in this play I have a whole cast of women doing fart jokes.”

Kent, who has been with CSF for 14 years, also notes that many times genders get swapped in Shakespeare with some sort of concept or agenda. “I’ve seen plays drown in their concepts. A Comedy of Errors is a great play because we are trying to ensure a light touch. I want to see a comedy as a comedy. It needs to be funny. The goal of this production is to allow women to carry the torch of comedy. We hope you get to watch four great ladies tell a comic story. After all, Shakespeare has been around for 450 years, it’s time to try something new with it.”

Colorado Shakespeare Festival at a Glance

A Comedy of Errors

Directed by Geoff Kent
At the Mary Rippon Outdoor Theatre

“We came into the world like brother and brother, and now let’s go hand in hand, not one before another.”

“…one of the most bracingly intelligent, sizzling theatrical American plays in a decade.” – Variety

“How hard it is to hide the sparks of nature!”