Faces of Summer: Bringing Magic Back to Denver 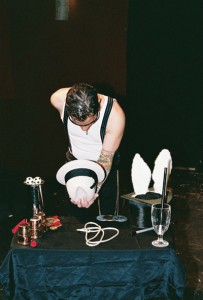 The astronomical growth in Denver is certainly no secret, as mom and pop shops all over the city are being lost to property developers, condos and high-rise buildings. One neighborhood, however, is maintaining its charm despite all the pop-up apartments and construction surrounding it. Some call it the Highlands neighborhood, others may call it Northside or even Sunnyside, but this specific part of town is called Berkeley, and it’s home to one of the last remaining beacons of real magic in Denver.

Just gazing into the windows of Mago’s Magic Shoppe, Oddities & Curios is like opening a window into your own imagination. It’s filled with magic tricks, local art, shrunken heads, medical oddities and any other oddball item you can think of. The brainchild of co-owners Kris Hipps and Matt Mago, this shop is unique to Denver. “We kind of modeled it after PeeWee’s Big Adventure,” offers Hipps. “We went to magic shops when we were kids. They were creepy, fun, small shops that were family owned, not like strip mall stuff.” And both Hipps and Mago have worked tirelessly to represent the store of their dreams. “We have shrunken heads, piranhas and taxidermy. We have alligator heads, alien skulls and creepy ventriloquist puppets and lots of vintage and antique magic.”

If it looks like you’re walking through an oddity and magic museum, that’s on purpose. Mago and Hipps carefully hand-pick each and every item for sale. “Matt is mainly the magic person. He knows the vintage stuff, what is rare and what a good antique is. We sell a lot of vintage and antique magic to magicians because they already have everything, and what they don’t have, they buy online. What we sell is experience, because Matt does magic for everyone who comes in the door. We try to make it a fun place for people to come in and have a lot to look at. That’s what so many people say, ‘man there’s a lot in here’ or ‘wow this stuff is so cool.’ We get a lot of that here.”

Sometimes the best magic trick is the illusion of the store itself. “Once in a while we get someone who asks for a real love potion or something to break a curse that was put on them,” Hipps laughs. “We tell them we are a stage magic shop and we then suggest nearby metaphysical shops… I’m also always asked if our shrunken heads are real.”

And the magic of Mago’s continues to inspire the neighborhood, artistic community and magicians of all kinds. “We’ve sponsored two guys from the Magic Castle in Los Angeles. We’ve had all kinds of magicians here… the president of the Magic Council was here last week… we’ve had independent films shot here and we also rent props to commercial and movie sets, like our huge mummy.”

As the neighborhoods in Denver and Boulder continue to grow and change, it’s important to support the mom and pop shops like Mago’s Magic Shoppe. You won’t find any other place in Colorado quite like it. Purchase a trick, check out the oddities and get to know Kris Hipps and Matt Mago, purveyors of imagination.