Faces of Summer: KUNC’s Neil Best and the future of radio 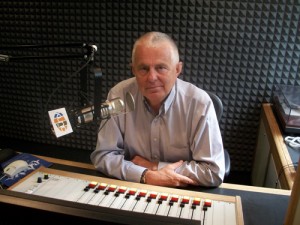 Neil Best livestup to his name.

It’s a fascinating story, and it’s one that proves that radio is here to stay, even if the way its delivered changes. “I think the good thing for radio is that we were in a position to watch what happened to the big three networks — ABC, CBS and NBC — when they discounted that cable was going to cut into their audiences. The train left the station and they didn’t recognize what was happening. The same thing is happening to print journalism in terms of where the ad revenue was going to go. Print is stuck with that ‘do we do a pay wall or not’ mentality. If you give everything away for free, how do you pay for it? But the traditions in print journalism have been there so long that people aren’t willing to go to a pay wall.”

Why is radio different? “Because we’ve long depended on the economic model that says, ‘look, you can have the content for free, but here’s what makes it so valuable — it’s paid for by our members. We’re not controlled by others and people have bought into that. As long as we continue to carry that message we should be successful.”

One of the big moves was the recent decision to split KUNC into two different stations — KUNC and The Colorado Sound. “If you go back 40 years or so, almost every station in our system was part of a school district, university or city government… the biggest change in keeping up with the times was that so many stations left those systems to become community stations… while I think public broadcasting is, at its core, educational, it’s not an educational facility. We’re not classrooms. We’re the lifelong learning part, so the mission of public broadcasting can get lost, and that’s certainly what happened with us and the University of Northern Colorado. We were long established as part of the institution, and one change at the top came in and we left the university.”

Ferguson explains that the February addition of a second station created two distinct stations with different formats. “We saw two things happen. We saw the need to change because, as people’s listening habits change, going from news to music back to news was causing us to lose listeners who either wanted news or music but not both. So with the growth in the area we saw the opportunity to do both. A lot of places saw this trend and shifted to being all news and abandoned music as a cultural influence… so this growth gave us the opportunity to better serve our audience with both a news information frequency and the music discovery station.

Will northern Colorado be ready to accept both public radio stations in the coming years? Only time will tell. “I guess we’ll find out in the next three years if I have to clean up a big mistake or if I can bask in the glory of doing the right thing. I think we’ve done the right thing.”