Watts the Future of Bicycling? 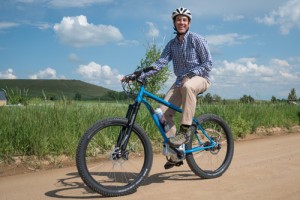 The author, in his old, low-performance bike riding gear.

I set out to become the greatest bike rider in Boulder County.

Here’s the scene: Up the steep-ish hill on Geer Canyon Drive up toward Heil Ranch, a half mile ahead I saw my competition: a mountain biker in his slick jersey, shaved legs, and submarine-sleek carbon fiber bike. His demeanor screamed, “I’m impressed with myself.”

And all my life, I’d wanted to pass dudes like him.

And there I was, in my usual bike-riding outfit: Dockers, a crumpled J. Crew shirt and clunky hiking boots, as aerodynamic as a hippopotamus on a skateboard. My demeanor screamed, “I am impressed with the all-you-can-eat crab legs at the Country Buffet.”

But, then — I pedaled. And I started to gain on Spandex Butt. I gained. I gained. I was LeMond. I was Lance. And, of a sudden, I blew by his Lycra-covered butt like a fox past a centipede.

In hiking boots! In a collared shirt! I felt greaaaaat!

He looked at me like I was an alien.

Yes, yes, OK: I had an assist. I was on an Optibike Electric bike with 500 watts of power. The Optibike has been called “the best” electric bike on the market by so many blogs and news outlets it’s hard to list them all. Their bikes are fast, cool, and they get the equivalent of, by one reckoning, 2,287 miles per gallon, enough to make any polar bear cheer.

The Optibike is the offspring of Jim Turner, a man who grew up with gasoline in his veins. Turner won the 1978 Canadian National Motocross Championship on his buzzsaw Suzuki 250cc dirt bike. After earning a master’s degree from Stanford, he designed shock absorbers for Ford. Yet, somewhere along the way, he was drawn to the possibilities of an electric bike; how a little extra power can change the game. He’s an e-bike evangelist now, and author of “The Electric Bike Book,” which he gives away free on Amazon.

Worldwide sales of e-bikes are surging, especially in Northern Europe and in China. Optibike sells 10 percent of its bikes overseas.

Now in its 10th year, Optibike makes its home in a shed off a dirt road in Longmont. Turner works there with his sons Nicholas, 25, and Austen, 20. They make some of the fastest, longest-running electric bikes in the world. A prototype they’re working on, which they call The Warthhog, is so torque-y you can pop wheelies, and it flies down the road at 35 mph, a speed almost unheard-of among electric bikes.

The fastest Optibike, the R11, puts out more power than the strongest Tour de France rider.

On my test rides, I passed biker after biker, including a dude named David Ferro, of Boulder. I slowed down next to him and, despite being on an incline, just stopped pedalling altogether. I kept pace with him. I smiled at his sweaty visage. I inquired about the weather. I said “Ta-Ta” and, with the breeziest of pedals, zipped off. Ferro says he thought he was getting slow until he realized my advantage.

My games with the bike were all about vanity, of course, the nerd from the chess club winning a fantasy duel over the jocks.

But for others, it’s about maintaining a lifestyle. Although he looks 60 years old, John Dearholt is 73. He lives in the hills above Boulder and used to ride his bike down to town and back. But, man, his knees are aging, and those hills aren’t shrinking, and getting back up Poorman Road to his home is no joke.

“I’m getting to the point where I want an assist,” he told me. Now, he’s got an Optibike with 800 watts of acceleration help — not that he knows what acceleration help means, exactly. “The only thing I know about acceleration on a bike is that if you eat too much pizza and then bike, you don’t accelerate,” Dearholt joked.

Jim Turner, Optibike founder, says he’s received emails from all kinds of satisfied customers: from people who’ve lost weight, cut their commute time or improved their mental health. He said an 84-year-old man wrote that he’s now able to go on long road rides with 30-year-olds, and keep up.

The list of cool things about Optibike is long. It was featured in the California Academy of Sciences Museum, as “the future of transportation.” If you ride one, you can wear your dress clothes, and still ride fast.

And, if climate change is real, then death rides a Harley, and green is the new cool.

Turner lent me the Optibike Pioneer for a week. It was great for around town: faster than anything else on the bike path, a cinch to park, really fun and a cool psychological boost. You approach a hill and you think, “crap, this is gonna be work,” and then it isn’t, the bike does the work for you. I averaged 20 mph around town with minimal effort. In one demonstration of its usefulness, Spoonie (the girlfriend) left for our book club meeting in her car five minutes before I left on the Optibike. By riding down the no-stop bike path, I beat her there. Also I believe my literary insights were more incisive.

Let’s be honest; since you don’t have a teleporter or an electric helicopter with a private pilot, there’s no mode of transportation that’s perfect: Cars wreck the climate and clog the roads, bikes make you sweaty, Harleys make you look like a hogg and buses don’t come often enough.

An electric bike, even the best electric bike — which is what Optibike is — isn’t perfect either. You have to remember to charge it; and if you run out of juice, suddenly you’re pushing around 20 extra pounds of dead battery.

But it’s worth a shot, right? If it can replace your car a few months out of the year, isn’t it worth a shot?