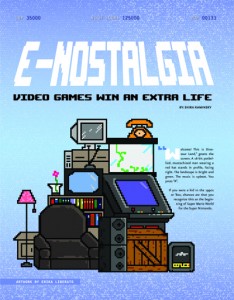 “Welcome! This is Dinosaur Land,” greets the screen. A 16-bit potbellied, mustachioed man wearing a red hat stands in profile, facing right. The landscape is bright and green. The music is upbeat. You press “A”.

If you were a kid in the 1990s or ‘80s, chances are that you recognize this as the beginning of Super Mario World for the Super Nintendo Entertainment System.

When baby boomers close their eyes, they think wistfully of “I Love Lucy,” transistor radios and Tang. Their children have Donkey Kong, The Legend of Zelda and Final Fantasy 3. But they’re not closing their eyes. They are buying, selling, collecting, playing and talking about these games en masse. And the gaming industry is listening.

Nintendo recently announced the November release of the NES Classic Edition, a mini console loaded with 30 games from the ‘80s and ‘90s. A few days later, Sega announced the Mini Mega Drive, another mini console, this one with 80 retro games preloaded, slated to be out this October. “The Art of Atari,” a book celebrating the visuals of Atari games from the ‘70s and ‘80s, will also be out this fall. To accompany its mini console, Nintendo is releasing a book, “Playing With Power,” a retrospective on 17 NES classics.

“Retro Gaming Will Be Super Hot This Holiday Season,” surmised Forbes in the title of a recent article. The market is booming. 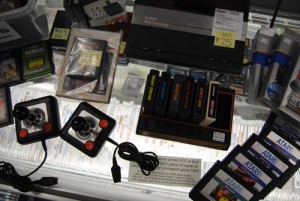 The Atari 7800 console, released in 1986. It achieved only moderate success at the time, and remains affordable today for the budding retro games enthusiast.

But new releases are not enough to quench the thirst for the “real” thing: the consoles and cartridges of days past. eBay is teaming with them. Factory sealed copies of Sonic the Hedgehog, for example, released in 1991, are selling for over $700 online. Stadium Events, a Nintendo game that was recalled in the United States shortly after its release in 1987, sold for $35,100 on eBay in January of 2015.

“Demand far outstrips supply,” said Harris Gottfried, owner of Game Force Boulder, a used video games store that has been around for decades. Gottfried has owned the shop since 2000. A lifelong gamer, he caters to serious collectors, nostalgic gamers and kids “barely taller than our display cases” alike. They all have one thing in common, according to Gottfried: “a childlike appreciation for things that are fun.”

“Kids are coming in asking about old Atari stuff and some relatively obscure things,” Gottfried said. He estimates that at least 50 percent of his customers are buying retro games that they have never played before, influenced by popular YouTube videos of “walkthroughs,” reviews or commentary of old games.

“But we also have people come in with their smartphones, and they have an app where everything is listed and they know that they need to look for this, that, or the other thing, specifically. It might be just an instructions manual booklet for a specific game or the box for a cartridge that they already own.” Gottfried is well aware that some of his customers turn around and flip what they buy at his shop on eBay, and that’s alright with him. “We want to move things off the shelf,” he explained.

“We have a factory sealed copy of Banjo-Tooie for the Nintendo 64 from back in the day. It has the original Circuit City price tag on it, with the metal security tag that if you pull it off, it would just wreck the shrink-wrap. When we priced it online at the time — this was a couple of years ago — it was going for $800 to $1,000 on eBay.” At Game Force, Harris priced it at $200. The cartridge by itself, not factory sealed, commonly sells for $25.

And of course, there are those who just want to play, like Jacob White of Aurora, another lifelong gamer with a soft spot for the video games of his childhood. “I usually only buy the ones that I want to play or have played in the past. I am not a collector trying to have the biggest collection, or an antiques dealer who wants only the rarest and most sought-after games,” he explained. “I get games to have fun now, and relive the fun of my youth.” 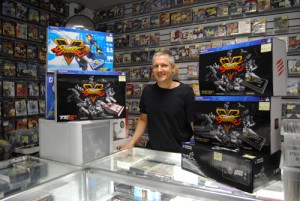 “I like to think of the store as an organized mess of video game treasures from every era of the industry.” — Game Force Boulder owner Harris Gottfried and his favorite video game: Street Fighter.

“I made the rash mistake of selling all my old games about 10 years ago, when I hit a rough patch, and I now look back on it and realize it was a horrible decision,” White said. “After the seller’s remorse died down, I vowed to never sell any game again.” White estimates his collection would be worth thousands of dollars today, had he kept it. “Not that I would sell them if I had them now.”

White used to buy games on eBay, but for him that’s no longer a viable option. “With everyone in the country for some reason interested in collecting retro games, it’s a hotbed for dealers who overbid games and then resell them later,” he said.

“It’s really tough to get into retro gaming collecting right now because prices are going up and up. Everyone wants the same things all at once,” Gottfried said. “A lot of our customers like to go on game-hunting trips where they just drive around to all the various local stores,” he added. “If you’re really adamant about it, you get up early in the morning and go to garage sales or estate sales. There are people that we see who make a living doing that stuff.”

White hopes the market will crash, but until then, he gets his retro gaming needs at his local used games shop, the flea market, Craigslist and yard sales.

So why is retro gaming having a moment now? There are several theories. “Video games have now been around long enough, and have become ubiquitous in our culture,” Gottfried said. People who were 10 years old when Super Nintendo came out in the U.S. are turning 35 this year. They’re firmly in adult territory, having kids of their own, settled down and pining to recapture their childhoods. The rise of “nerd culture” may also be a contributing factor. Nerds love video games, and nowadays nerds are cool. “Today ‘nerd’ is a compliment,” Gottfried explained. “Back in the day, when I was growing up, someone might beat you up because they think you’re a nerd. Now it’s seen as sexy.”

While Nintendo and Sega caught on to the retro gaming trend recently, independent developers have been doing it for years. For Jet Ternlund, president and chief technology officer of Limn Interactive, a video game company based in Denver, retro games never went out of style. He started playing and building games when he got his first computer, an Apple II+, in 1979.

“Back then you had very limited memory and performance was a really big deal,” Ternlund said. “You didn’t have a lot to work with. So the style was simpler. You were limited on how many colors you could use, what palette you had. And we used to write games in assembly language.”

These limitations brought about the beloved pixelated look and repetitive sound of retro games. “The music, the visuals, people are attracted to that,” Ternlund explained. He described an event in which someone played live music using a bunch of 8-bit Game Boys, taken apart and connected to the sound system, and people were dancing to it. “People love that sound,” he said.

Ternlund and his team at Limn Interactive travel to events nationwide, filling movie theaters and convention centers. They hold tournaments with prizes, giving people a chance to play the classics on the big screen, as well as the company’s own releases, influenced and inspired by retro games.

Zen Pathz is one such game. A fighter/platformer hybrid, Zen Pathz is designed to be accessible. “We spent years tuning the mechanics and controls of the game so it is easy and natural to pick up and play,” Ternlund said. At the same time, he explained that the game offers advanced actions and techniques to be mastered over time, with a high skill ceiling for competitive play.

“We built it with that old style. The mechanics of the game, when you control the characters, it has a certain feel. It behaves a certain way. When you press the button, it jumps. There are physics within the game. But it’s more refined to make it modern,” Ternlund added.

“As a kid, I remember calculating how many lawns can I mow to save up the money to get Contra,” said Gottfried. “Because I can’t live without it and the world is going to end if I don’t get it.” Contra is a run and action game from 1987. Today, Gottfried is a bit less dramatic but just as passionate. And his personal collection has grown considerably. After years, he finally finished collecting the entire series of Ultima games for the Commodore 64. Next on his list is Little Samson, an action platformer game from 1992.

White yearns for the Mega Man series, which he almost completed years ago, but then sold off. “I can’t replicate the feeling I get when I play those games,” he said, comparing the series of games to songs in an album by a favorite band. “Each song makes you feel different because each song is different. It’s the same with games.” 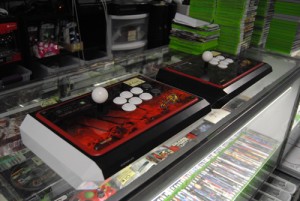 $95 is a bargain for this Street Fighter IV tournament edition controller at Game Force Boulder. 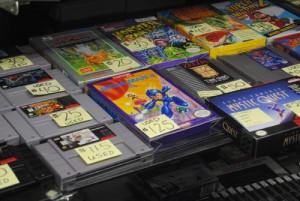 Is the cartridge in its original box? Is it factory sealed? A game might be worth triple or quadruple the price depending on these factors.