Pedaling the Road to Food Equity 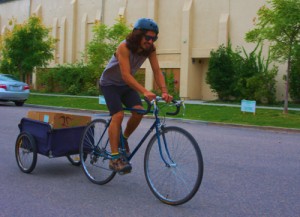 Michael Rush enjoys cycling for all the normal reasons: it’s a chance to enjoy the great outdoors, reap the benefits of physical exercise and bask in the Colorado sunshine. But if you happen to catch him during one of his volunteer shifts for Boulder Food Rescue, you’ll notice him pulling a trailer heaping with healthy food and produce — and that is far from ordinary.

At first glance, transporting hundreds of pounds of food on a bicycle trailer seems intense. But for socially-conscious CU graduate student Michael Rush, his decision to volunteer with Boulder Food Rescue just made sense. “It was a perfect union of my need for exercise and my passion for trying to combat food waste.”

And when it comes to the latter, he’s certainly made a difference.

Since Rush started volunteering at Boulder Food Rescue one year ago, he’s biked through heat, rain and snow to rescue over 16,000 pounds of food. The nonprofit group collects unwanted food from over 28 area grocery stores and restaurants and redistributes it to those in need.

This means that selfless volunteers like Rush are critical to improving health equity in a city that’s historically struggled with income inequality. Although riding in extreme conditions requires a deep level of perseverance, Rush admitted cheers of encouragement from local Boulder residents help keep him going. “I get quite a bit of support, especially if it’s super snowy out,” he said.

Most of Rush’s shifts have gone quite smoothly, albeit for one particular incident when his overzealous commitment to the cause ended in a serious spill. After piling a 6-foot stack of food onto his trailer, Rush rode around a corner too quickly and sent the entirety of his load tumbling across the road. “I was taking on shifts excessively, spending about 10-15 hours a week volunteering, and that was kind of a wake-up call that I had to take a step back.”

Rush’s strong passion for the group’s mission is undoubtedly furthered by the personal interactions with those he’s able to help. His weekly delivery routes connect him to the same donors and donees, offering a chance to form special bonds with community members he might not otherwise interact with. “It’s really fun to form relationships with these recipients,” said Rush.

One recipient Rush is especially passionate about visiting is Boulder’s Attention Homes, a group that works to alleviate youth homelessness. Here Rush can learn about other social justice efforts in the city of Boulder while at the same time increasing access to healthy food across the city. Rush added, “there’s also been in the news a new plan with housing units for homeless youth, and getting to know Attention Homes’ story and mission helps me voice my support for that.”

Boulder Food Rescue’s efforts may seem like just a tiny step towards reducing food waste in a country that wastes 133 billion pounds of food annually, but Rush believes this type of work can help raise awareness of an issue that’s becoming increasingly problematic. “This also serves to draw attention to how inefficient the food system is,” he said. “There’s something cool about getting out on a bike and just showing everyone how to save all this food that would otherwise be wasted.”

So the next time you see a Boulder Food Rescue volunteer in action, give them a few words of encouragement. If Boulder has learned anything from this food rescue movement, it’s that a little bit goes a long way.

View all posts by Michelle Polizzi →