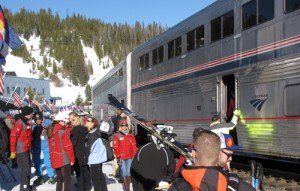 Boarding a train will skis is a thing again.

A Ski Train returns: Amtrak’s Winter Park Express, a 500-passenger double-decker railcar, will carry travelers from Union Station to Winter Park resort on weekends from January through March. | Proxima b is the name of the Earth-like planet in the next solar system over. Aim your escape pod accordingly. | Registering to vote is soooo hard, or it was before you could just text “CO” to “2Vote” on a smartphones and then follow a reply link to online voter registration or other voter info. In its first three weeks, the text registration page received more than 900 clicks. | PC magazine reported Longmont has the third-fastest internet speeds in the nation, and more than double that of Denver. | Boulder’s prairie dogs at the Armory development received a stay of execution, and will pack up their things and move to a city-owned open space. | Denver-based Frontier Airlines opened direct flights from Miami to Havana, Cuba — just remember not to bring any bags. | Colorado Libertarians now make up 1 percent of registered voters, which helped its candidate Lily Williams qualify for a U.S. Senate debate, the first in eons. The “purple” state is getting more colorful. | CBS ranked Boulder #7 of “The 25 best cities to live in,” which prompted plenty of feedback from natives and transplants to decry variations of “Boulder’s full, don’t move here.”

19 — number of chemicals the FDA has banned from so-called anti-bacterial hand soaps.

$54M— Brookings Institution’s estimate of how much U.S. taxpayers paid for Mile High Stadium, part of the $3.7 billion taxpayers have paid in stadium subsidies since 2000.